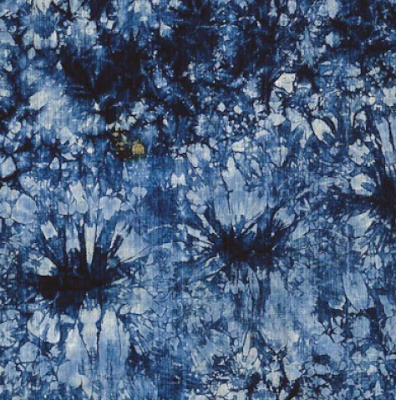 [Gambia, first half of the 19th century. The British Museum, London (Af.2796). Image via the Met.]
Long before free spirited college kids embraced it in the late 1960s, and centuries before it became a staple craft activity at suburban summer camps, tie-dye was a technique used around the globe. Shown above is a detail view of a masterful example from Africa. September 2008 through April 2009 it was included in the Met's exhibition, The Essential Art of African Textiles: Design Without End.

According to the museum, this cotton indigo tie-dyed piece was among the earliest African textiles acquired by The British Museum and it's the oldest example of this art form to have been preserved. It would be easy to assume the "cosmic explosion" look of the design was spontaneous or experimental, but curators say the repetitive pattern and even distribution of indigo resulted from skilled crumpling, binding, and overall control. Like many African cloths, this example was woven with narrow strips of fabric, however,  as Hali notes in their spring 2009 issue, the bursts of blue here cloud the underlying contruction.
Posted by Style Court at 1:39 PM

Courtney this is fabulous and I love tie die!! The blue and white is gorgeous.

So pretty - that print is wonderful. I love that tie die is making a comback...but more sophisticated this go round.

Just love tie-dye. Thanks for sharing. Hope you are having a great weekend.

Beautiful! Tie dye and marbling are always so appealing!