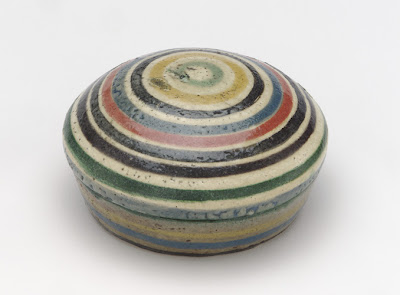 [Japanese clay, ca. 1731-43, made by Ogata Kenzan (Japanese, 1663-1743) at the end of his life, when he lived in Edo (modern Tokyo) copyright © Smithsonian Institution .]
I thought it would be fun to wrap up this week of Freer + Sackler mentions with a surprising 18th-century Japanese ceramic box, or incense container, made to resemble a child's wooden toy top. According to the F + S, the box is "deceptively simple," most likely has multiple meanings, and was intended to amuse a sophisticated audience.

It seems like we are always saying this about old Japanese pieces, but doesn't the container feel contemporary? Particularly with those stripes? Apart from mimicking a child's toy, this ceramic box also imitates an imported luxury good once favored by Japanese collectors:  Chinese lacquer boxes from the late Ming dynasty (16th to 17th century) decorated with multi-hued concentric circles. The F + S explains that the Japanese interpreted these items as "tops".  Apparently both wood and clay versions were used during tea ceremonies to hold pellets of incense. 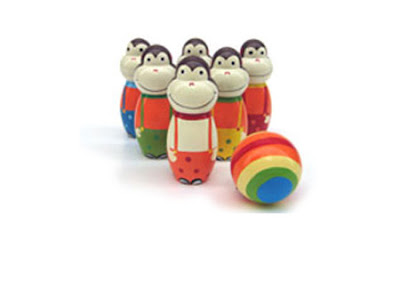 The circular jar reminds me of the rainbow wooden bowls, measuring cups and spoons for the kitchen. The monkeys are great!
Good Friday to you,
L.

And to you LMF!

You are so on target, no pun intended :)

This is one of the things that makes Japanese art and design so fascinating (to me, anyway): the tendency to mimic one material in another, and to create elaborate visual puns around the shape and identity of different objects and motifs. Sometimes this seems almost childish to us westerners - and there certainly is an element of childish glee in it - but in fact it is a highly sophisticated visual language.

Glad to have my daily design history lesson! Bon Weekend!