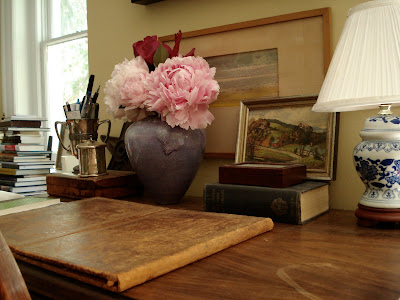 More often than not the flowers I share here tend to come from the grocery store. (At the moment only two gardenias are blooming on my little brick landing, both in yellowed shades of sepia rather than creamy white.) Supporting local businesses is a great thing, but I thought it would be nice to look at a few blossoms that really were cut from someone's private garden. 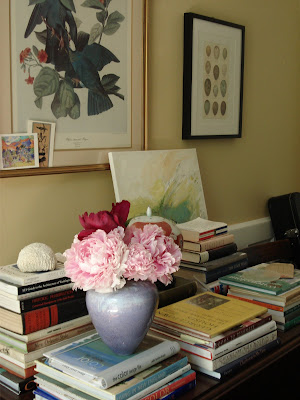 Ryan in D.C. has a dad who is an avid gardener with a tendency to become very focused on a particular plant. "First there was the Japanese Maple Period," says the son, "Fortunately for us, he had a peony phase that started about 10 years ago. I look forward to this time of year when, after Sunday dinner, my parents send me home with buckets full of richly fragranced color." 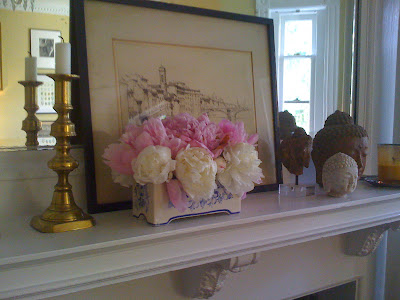 Ryan's vignettes made me think of Julie Miller's quote brought to life, so I asked him to fill us in on the backstories. 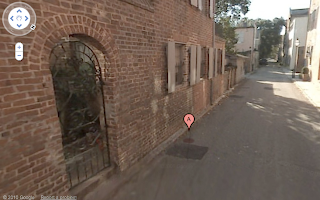 [Via Google maps.]
"The large Buddha sculpture on the mantle commemorates a summer my brother and I shared what is undoubtedly the smallest house on peninsular Charleston (its roof makes a cameo appearance in Susan Sully's Charleston Style: Past and Present). It was one of those rare gems of an apartment with provenance -- a line of occupancy that could be traced back through friends of friends (or in my case an ex of a friend). Whether or not the story is apocryphal, the previous tenant claimed it was a Speakeasy in the 1920s, which was very appropriate, given the time I spent there during my sophomore year in College." Ryan goes on to say that their digs had a wonderful little courtyard that hugged Elliott Street. At the end of the summer, as a thank you, his brother surprised him with the sculpture, which started the collection.

[Capitol Hill Eastern Market logo.]
Ryan is quick to point out that none of these objects are overly precious in the monetary sense. "Their value is in the associated memory," he explains, "I spent many a weekend of my childhood roaming estate sales and antique malls around Northern Virginia and Maryland. At an early age, we were taught that old objects should be respected."

The small landscape, titled Vermont, was purchased at a threadbare shop in South Carolina. "When you are a kid and make an allowance of, say, $5 dollars a week, $25 is a lot to pay for a small painting. My father, noticing how much I loved it, went back the next day and bought it along with a second painting by the same unknown artist. Both were waiting under the tree the following Christmas." 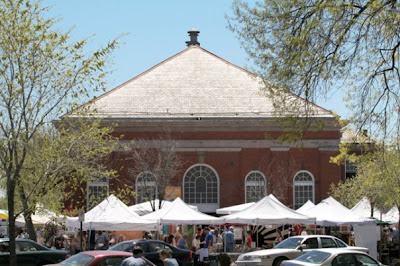 [Photo by Joe Shymanski via Eastern Market.]
The Audubon is a reproduction "purchased for a song" at Capitol Hill's beloved Eastern Market. Ryan notes, "In addition to the families that run the bakery, butcher, seafood and produce counters (some have served the community for generations) on the market's interior, an open air market is held every weekend where, in addition to picking up locally grown produce, you can find everything from West African textiles to Persian rugs to used bikes." 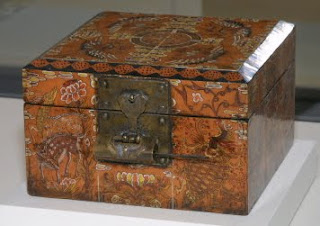 [Painted ox-horn and lacquer on wood, Korea, 1800-1890, acquisition made possible by Dr. and Mrs. David Buchanan, Asian Museum of Art.]

As you probably know, peonies are ubiquitous in Asian art. Surprisingly, the symbolism behind my favorite flower is a tad less romantic or earthy than I imagined. According to the Asian Museum of Art, peonies signify financial security and honor (all good). There are beautiful examples in D.C.'s Freer + Sackler galleries, but I stumbled upon a very interesting box at the San Francisco museum, shown above. Apparently the deer, turtle, and yeongji fungus are longevity symbols, while the phoenix and peony represent peace, harmony, and prosperity. 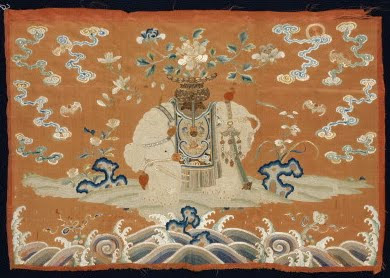 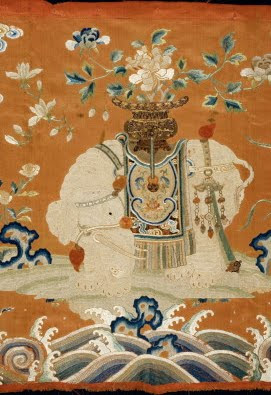 And what could be better than an embroidered elephant carrying a basket of peonies and magnolias?
Posted by Style Court at 12:21 PM

a lovely being said...

I'd love to have a garden full of peonies.. someday! always enjoy your posts :)

Flower power is one of the best powers out there. Love the post!

I have a candlestick almost identical to the one on Ryan's chimneypiece - bought it in Swindon's only antique shop because I liked its chunkyness.

Isn't this what blogging is about - reading these fascinatingly personal and usually well-written stories by complete strangers? This post was one of the best I've read, so thank you.

The peonies in my vase come from the grocery store, too, and what I appreciate the most about them other than their chintz-like form is their soft scent. Scented flowers are something that has disappeared from flowersellers, except for lilies, daffodils, hyacinths and peonies. There was a time when roses had wonderful scents, carnations smelled sharply spicy and warm, but its all gone. Without a greenhouse or a garden what is there to do?

The peonies in my garden are in full bloom right now and absolutely gorgeous. In fact my garden is prettier this year than it has been for years. My New Dawn is ready to burst into full bloom, and all my old and English roses are breathtaking. This Spring is absolutely glorious!

Would you believe I picked up the pair at a thrift store in the DC suburbs? What is the date on your candlestick? I'm guessing mine are from the early to mid 19th-Century, but not entirely sure.

It is amazing how some flowers can cheer up any room.

What a loved most about Ryan's wonderful story was the bit about his dad seeing how much his young son loved the artwork, that he went back for more to surprise him at Christmas. Lovingly told by the way.

I live in Kansas. My blogger friend Trouvais, in California. We both grow the award-winning peony "Kansas." It's been fun to watch her "Kansas" open three weeks before mine. Even more that she loved this state's namsake peony before I knew her through bloggin. Peonies, the traditional memorial day flower, are wonderful holders of memory.

Again thanks SC and Ryan for a such a bit of loveliness.

Ryan, I am not very good on candlesticks, so your guess is as good as - or better than - mine. No idea either whether yours came from England or mine came from America. But its fascinating, a classic blog moment.

Not sure what I enjoyed more here...the images, the story or the dialogue. Either way, excellent post and discussion.

Courtney ~ I always think of you when the peonies come into bloom. There is a bunch on my coffee table right now, surrounded by my Chinese enamel pieces. Easing into summer with a punch of color....