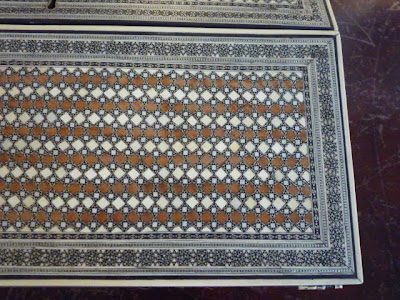 [Late-19th-century sadeli inlaid Anglo Indian lap desk, or writing box, from F.S. Henemader Antiques Inc.]
I’ve said it before; I have a thing for beautiful, utilitarian boxes. Not really sure why. I guess boxes are inherently enticing (what has she got in there?), yet more practical than other objects. 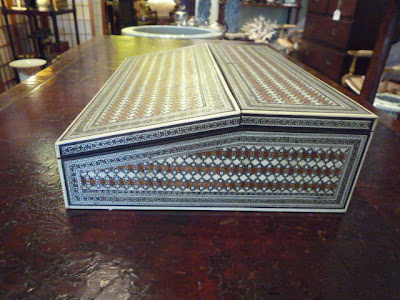 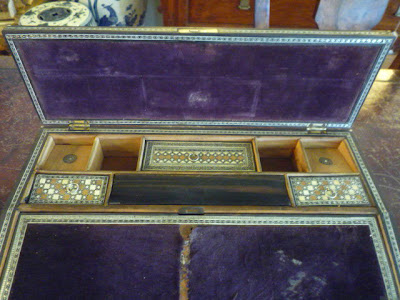 [Detailed images via F.S. Henemader Antiques Inc.]
At the moment, old writing boxes are on my mind because I spied one over at the newly launched website of award-winning Atlanta-based writer Mary Laura Philpott. It’s a strictly professional site, but along with her well-crafted words Mary Laura offers a smattering of images to further convey her style. 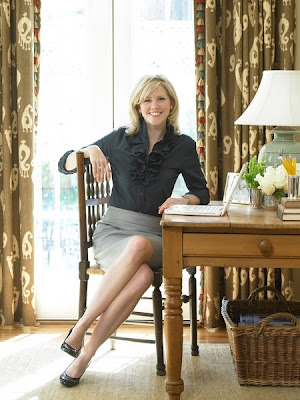 [©Mary Laura Philpott, photography by Emily Followill.]
She and interiors photographer Emily Followill collaborated on the vignettes and I don’t think they incorporated a single borrowed prop. The silver baby cups, the books, the stationery, the julep cup, and the antique box—all pieces Mary Laura really owns and uses. 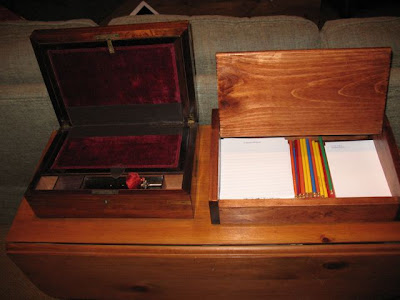 Actually there are two treasured writing boxes at the Philpott house: the older box Mary Laura received as a wedding present and her son’s. The latter was made by her dad. No, it’s not a Wii, but Mary Laura’s little boy is still young enough to think it’s cool to have something just like Mom’s and she tells me that he uses his every day. 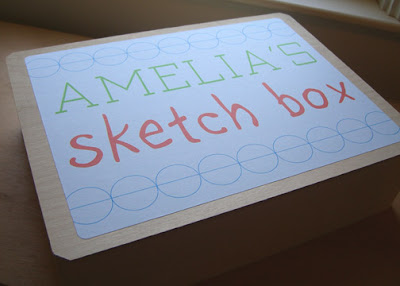 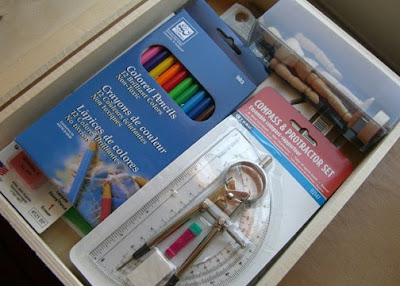 [Photography via The Long Thread.]
All sorts of nicely-stocked boxes can be fun for kids. Ellen Baker used to work in the High's education department and these days, when her daughters are invited to a birthday party, she often makes a child's sketch box for the girls to give their friend. (Look for Ellen's craft book to be published by Chronicle spring 2011.) 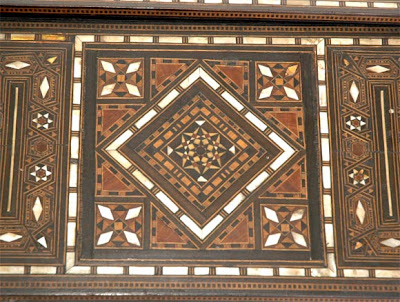 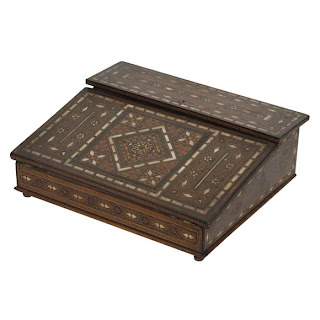 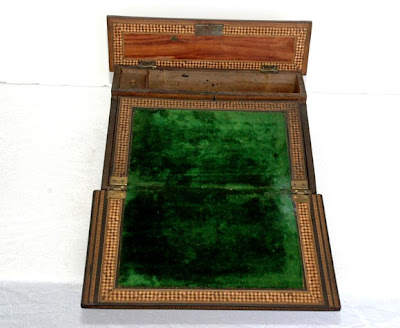 Personally, I'm obsessed with the intricate patterns of inlaid North African and Indian boxes. Shown directly above and below is a circa 1910 North African lap desk with secret compartments from Jefferson West. (Click here for more on inlay work and Indo-European furniture and accessories.) 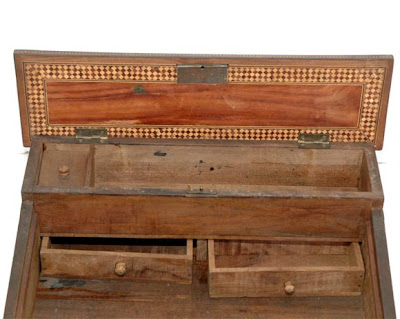 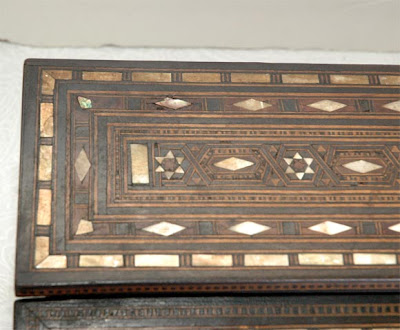 And here is a circa 1820 Indian teak writing box with inlaid ivory from Branca. 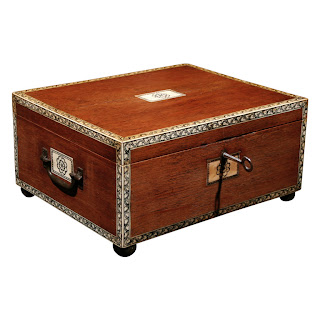 Check out the details. 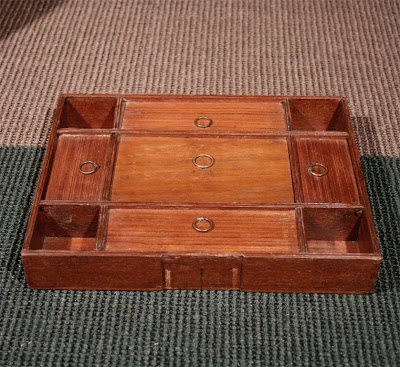 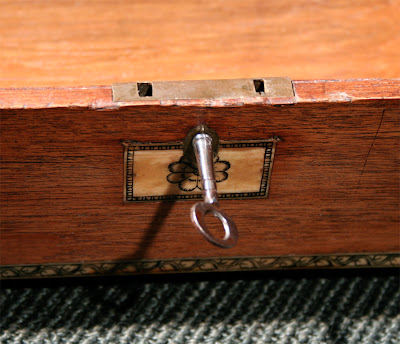 Of course, I like marbelized surfaces too. We've talked about marbled papers before, as well as box making projects, so I was excited when respected Washington, D.C. architect Stefan Hurray showed me his own personal 'dream' box made by hand at a marbelizing workshop. 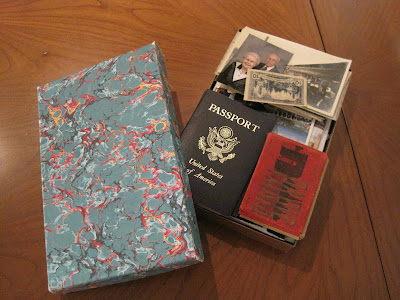 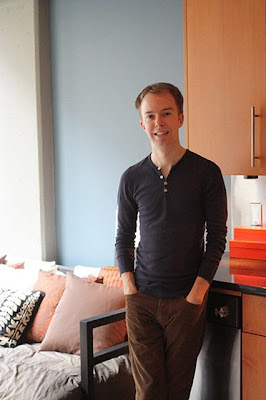 [Marbled box pictures courtesy Stefan Hurray; portrait by Leah Moss of Apartment Therapy.]
Stefan says it is filled with clippings from magazines -- places he would like to visit and projects he admires -- plus his current and expired passports, birth certificate, other important documents, cards worth keeping, and mementos. In short, where Stefan has been and where he wants to go. 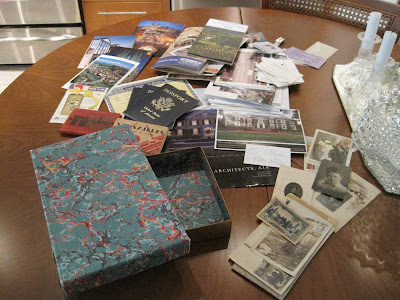 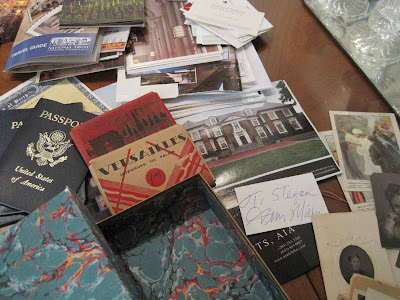 Everyone should have a 'dream' box or a secret box that locks.  While I vividly remember the 'key' scene in Dangerous Liasons, at the moment I can't recall a specific box or writing slope used in the film.

[Screengrab from YouTube.]
I do, however, remember Dharma & Greg's box episode. Pop culture stays in the brain forever. (Miss that show too.) 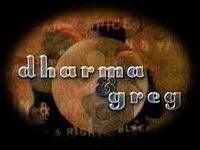 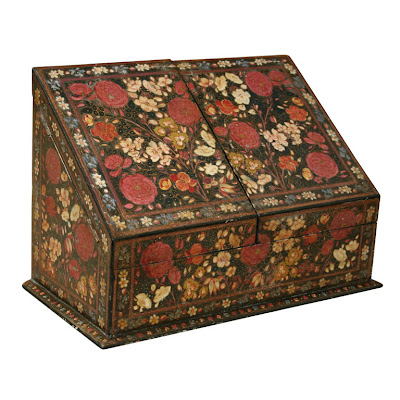 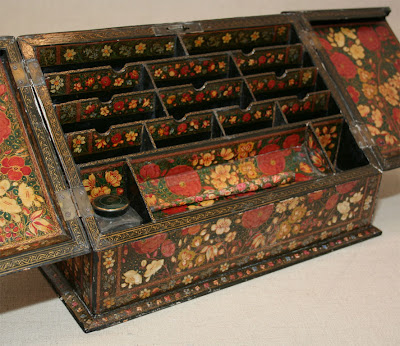 [Late-19th-century Kashmiri polychrome lacquered fitted writing box with exterior and interior ornamentation from Yale Burge.]
For a little background on highly ornamental working boxes, here's a blast from the past by yours truly. And let's not forget the gorgeous boxes in San Francisco-based Grant K. Gibson's project. 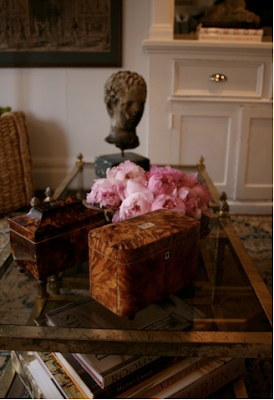 I enjoy letter writing supplies too. And I love Stefan's option for a wide array of stuff. A dream box -- that's what I need :)

Some of the most beautiful boxes I have seen. The inlaid and tortoiseshell are my favorites. Also love the marbelized paper boxes like Stefan's. I follow his site also by the way...a wealth of information.

What a beautiful post! I love Stefan's box, I think he needs to get busy (very) on a new box for his adventures. I gave my niece a writing box for her college graduation, She loved it, hopefully chocked full of some of her own memories. pgt

Yes, Stefan offers a wealth of information and beautiful images. Plus, he's super-creative!

well i'm blushing at all this sweet talk! THere's that picture of me again! I had no idea I was going to be photographed that day- unshowered and bedhead! oh well.....
GREAT post! My dad has a beautiful old writing box that I keep meaning to take next time I'm home -not as fancy as these perhaps but I LOVE all of the little compartments! It's the mystery of the 'secret' compartments that gets me. Now...I just need some secrets to keep!

Love the post and the subject and especially the adorable bed-head dreamer box. Boxes are a fascination for me and I'm not sure why. I like everything about them: the ornamentation (often with feet), the detail, the promise of organization. I just like looking at them. The only exasperating thing about them is to remember what I put in them so I would remember where I put it.

Like you, I love storage boxes and baskets and have lots. But this was a particularly lovely selection you highlighted. But I have to admit that what I loved best was the fact that you included both Dangerous Liaisons and Dharma and Greg! (And yes, I had to go watch a bit of D&G).

Thanks for assuring me that I'm not the only design/art/style blogger who is a huge fan of D & G :)