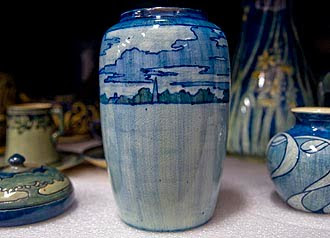 [Unusual 1901 high-glaze Newcomb Pottery vase photographed by Paula Burch-Celentano. Image via Tulane University New Wave.]
Made using local clays dug near Lake Pontchartrain, inspired by regional flora and fauna, one of a kind, hand-decorated... sounds like a young 21st-century potter immersed in the handmade movement is describing her wares, doesn't it?  Actually, that is a description of early-20th-century Newcomb Pottery. (I was combing through some Louisiana State Museum reference materials.) 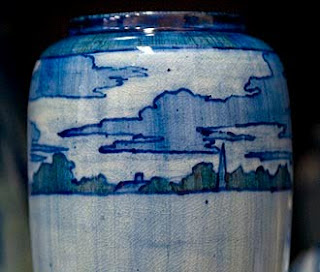 [Detail view, rare 1901 high-glaze Newcomb Pottery vase photographed by Paula Burch-Celentano. Image via Tulane University New Wave.]
My past mentions of Newcomb Pottery have probably been too brief.  The High in Atlanta has a Newcomb piece that is usually kept out on view -- no matter how the permanent collection is shifted around -- so I used to have the essential Newcomb facts ingrained in my brain, and I sometimes forget that everyone around the globe isn't familiar with it. But the other day, while revisiting Anthropologie's Utility + Craft feature, I started wondering what the women of Newcomb might think of today's working ceramicists and artists and the expanded opportunities they have. (And what would they think of craft/design blogs?) 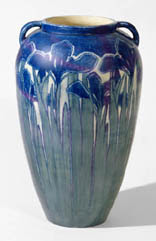 Here's Newcomb at a glance:

The Pottery was begun in New Orleans in 1894 by RISD alum, Ellsworth Woodward, who was then the head of the Sophie Newcomb College art department. He wanted his students to be able to apply their fine arts training after graduation and have the option of employment. Newcomb teacher Mary Given Sheerer, a progressive Cincinnati School of Design-trained sculptor and painter, had a similar vision and for several decades the endeavor did prove to be a critical and commercial success. The Newcomb College Center for Research on Women sums it up:

Newcomb Pottery is considered one of the most significant American art potteries of the first half of the twentieth century. Influenced by the English Arts and Crafts movement, Newcomb pottery was exhibited around the world, sold in shops on both coasts, and written about in art journals throughout the United States and Europe. Newcomb potters (always men) and designers (always women and girls) were awarded eight medals at international exhibitions before 1916. 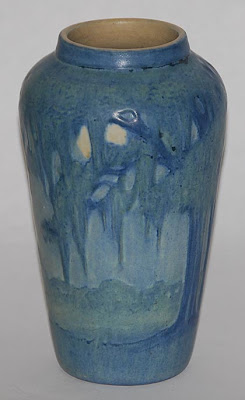 And Newcomb College also experimented with a textile program. Again using the local Louisiana-inspired design motifs, like the stylized Spanish moss and moon in a then all-the-rage japanesque composition, the women created wall hangings. The coarse linen background of this embroidered piece in the Met's collection reminds me a little of the burlap Lisa Borgnes Giramonti uses in her work. The Met says this wall hanging was most likely designed by Newcomb's Anna Frances Simpson and made with silk thread in a darning stitch. 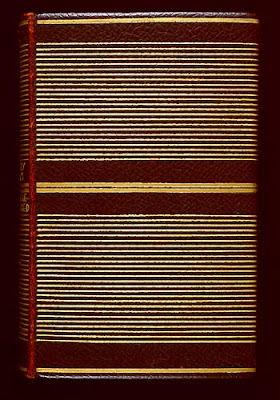 [An example of Newcomb College bookbinding, leather bound and tooled by Lilian Rogers
circa 1935 via Louisiana State Museum.]
Most of the pottery was thrown by French-born potter, Joseph Meyer, who was with Newcomb for 30 years. School administrators believed that the messy, intense work of throwing and kiln firing was best left to professional male potters, despite Mary Given Sheerer's suggestion that students throw their own pieces. Sheerer was responsible for the studio's designs, while Newcomb students painted the wares. Profiles of three Newcomb artists can be found here. Also, there is detailed background information here.

Just a quick note about the vase shown at top: it was acquired last year by the Newcomb Art Gallery at Tulane University and is believed to be vase decorator Alice Raymond Scudder's interpretation of a hurricane-caused flood that hit coastal Louisiana on August 14, 1901. More about that here. 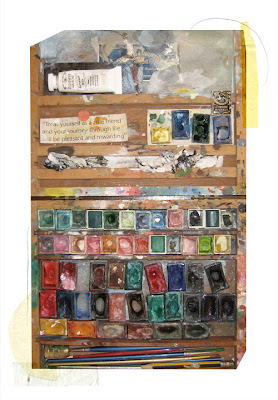 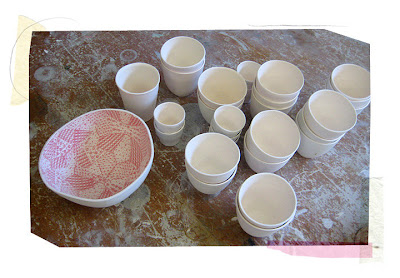 Sources used to fact check this post include Louisiana State Museum and the Newcomb College Center for Research on Women. 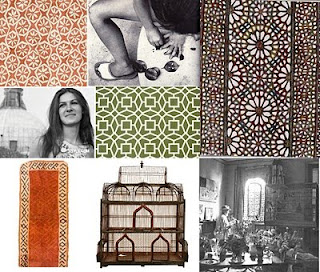 Newcomb Pottery is so inspiring. I love the shades in the clay. Thanks so much for sharing Courtney!

Oh, I adore Newcomb pottery! Back in college I my student job was at the LSU MoA, which has a nice collection of Newcomb pottery. The pieces are so lovely to see in person.

Most of the pottery was thrown by French-born potter, Joseph Meyer, who was with Newcomb for 30 years.