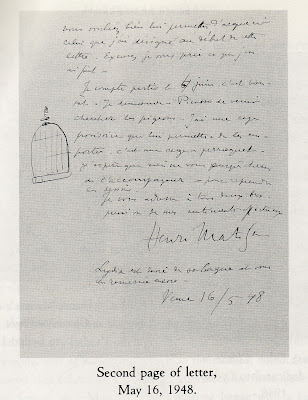 [Francoise Gilot's letters from Matisse as seen in Matisse and Picasso: A Friendship in Art.]
I'm still putting together ideas for a one-room studio inspired by Eat, Breathe, Draw, Sleep, but I got a little sidetracked thinking how nice it would be to spend a week doing just those activities. 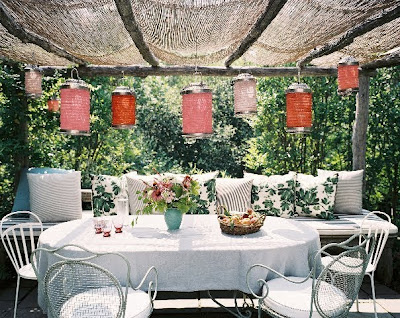 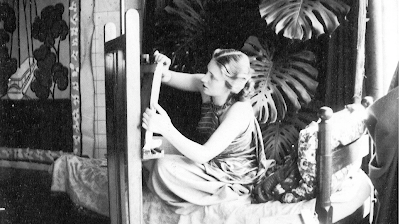 [Matisse's photograph of his assistant, Lydia Delectorskaya, circa 1935.] 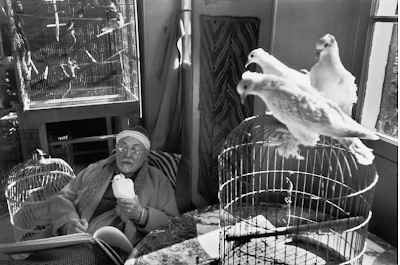 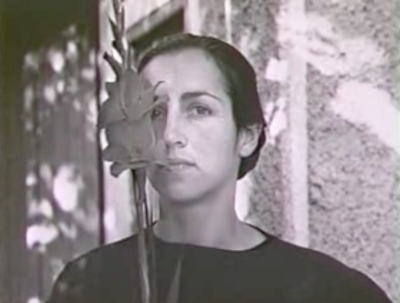 [Francoise Gilot in 1948 photographed by Gjon Midi for Life Magazine.] Henri Cartier-Bresson: The Modern Century, an exhibition currently on view at MoMA, includes the photographer's famous portrait of Matisse and is traveling to the High in 2011. Looking at a range of vintage photos of Matisse, Picasso, Francoise Gilot, and Paloma Picasso (mainly from the 1940s and 50s), I started imagining a casual garden dinner party to sort of cap off a relaxing week. Maybe a birthday celebration. Not a theme party, but again, something vaguely inspired by Eat, Breathe, Draw, Sleep. 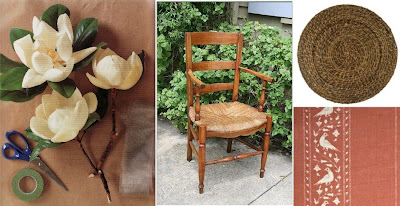 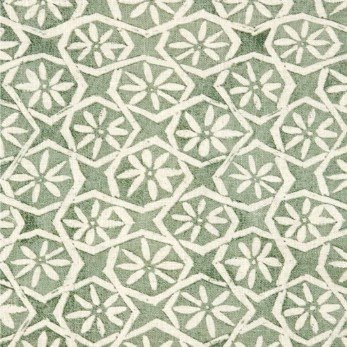 [Credits follow below.]
I really like the thought of using Lisa Fine's Baroda II linen to cover one long dining table and then mixing in napkins made from remnants of Carolina Irving's Andaluz. (Remember, this is all just imaginary play for now.) Both fabrics have elements that very much remind me of the 20th-century masters.  Irving's print resembles the North African textiles collected by Matisse, as well as his drawings on the envelope above... 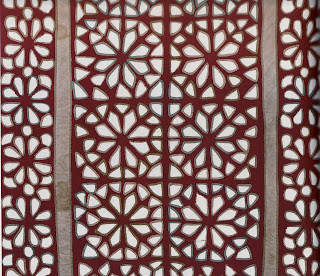 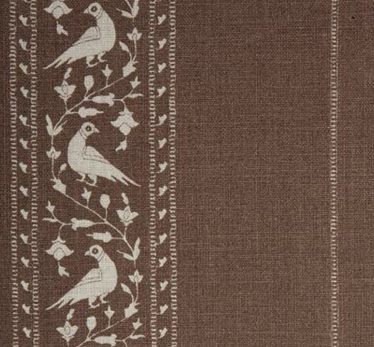 ...while Fine's birds definitely connect with the mood.

It was amazing to see how much space birds occupied in Matisse's and Picasso's correspondence. Birds seem indeed to have been a common denominator for Matisse, Picasso, and me. Both artists always kept birds at home -- Matisse mostly exotic species, Pablo the more ordinary kind, except for the owl. In my grandmother's garden in Paris, my father's aviary had enchanted my childhood. 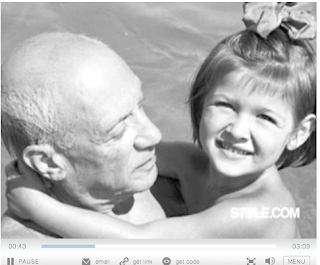 [Screengrab via  STYLE.com.]
Also, as you probably already know, Paloma Picasso was named for the iconic dove symbol designed by her father. I've shown the same two fabrics in multiple color options because I'm drawn to the idea of Matisse-like pairings on the table. 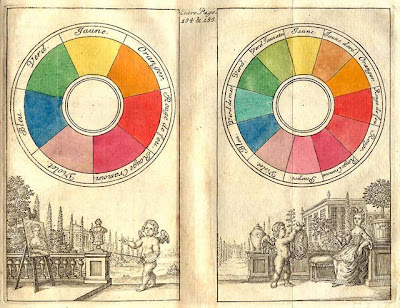 [©Sarah Lowengard's The Creation of Color in Eighteenth Century Europe.]
Could be complimentary colors, such as red with green or, other variations of color wheel opposites, like lavender and curry. In short, one color from Irving's collection and an opposing hue from Fine's. 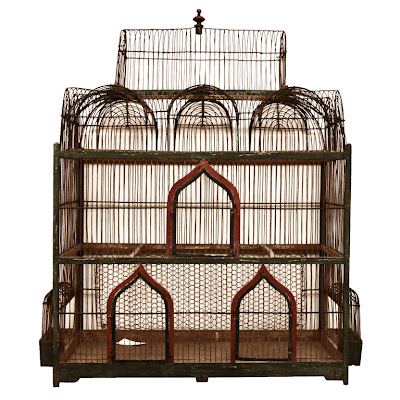 The Moorish-style doors on this red-and-green, 19th-century French architectural birdcage from Benjamin Wilson Antiques suggest Matisse to me, too, so it would go on another table placed up against a courtyard wall. 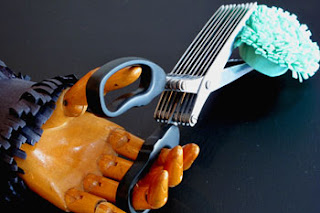 [
[Scissors via to Bell'occhio.]
I might suspend a few paper birds or fresh flowers inside. (In his new book,  Flair,  Joe Nye offers advice for using whimsical pieces without getting cheesey.) A small bar could be set up next to the antique cage. 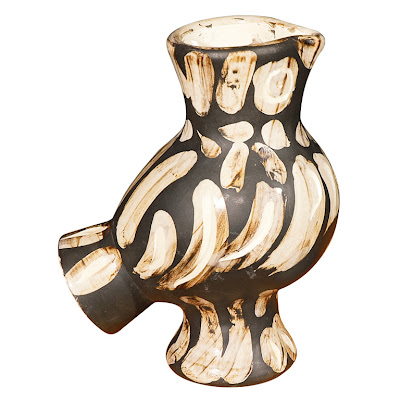 One too many birds and everything could appear too staged. That said, maybe a ceramic Picasso owl from J.F. Chen could hold fresh green leaves by the ice bucket. 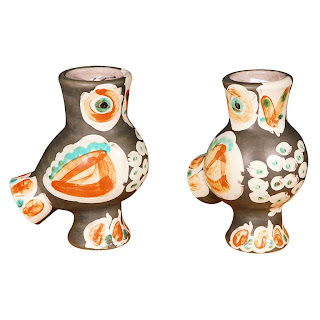 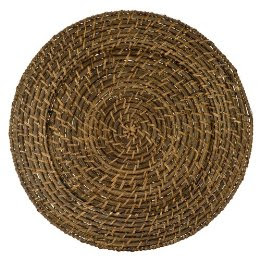 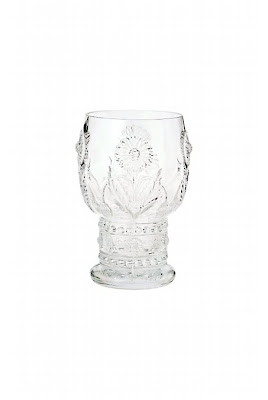 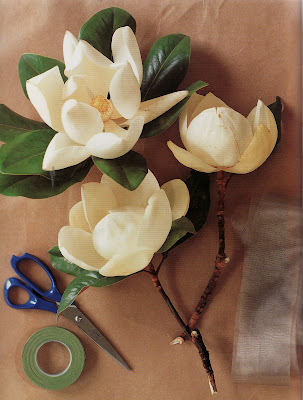 [Photograph by Amy Neunsinger from Shabby Chic: Sumptuous Settings and Other Lovely Things.]
Magnolia's cut from someone's backyard (because of the still life),  a mish-mash of rustic chairs, like the one above from Wirthmore, and possibly a child's Thonet bench from Huntington House. 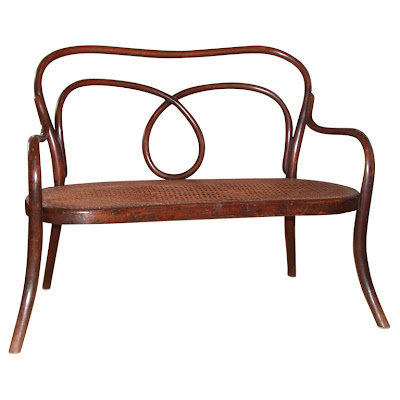 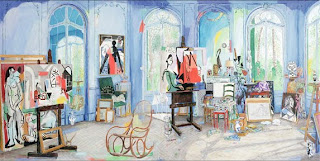 Handwritten invitations mimicking Matisse's letters, and loads of candles. Oh and a guitar in the corner propped against a wall -- another nod to Picasso. Apart from the food and the utensils, what am I missing? 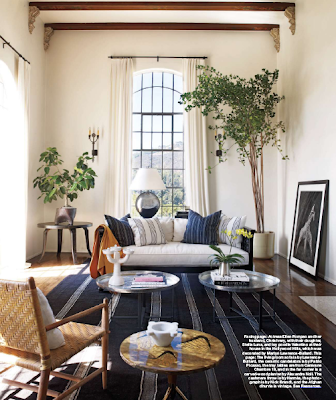 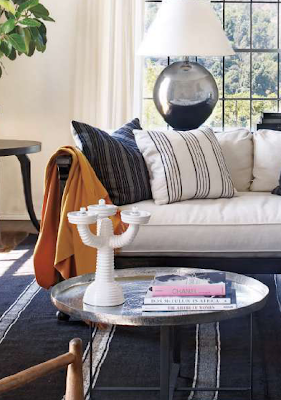 Please invite me, sounds like so much fun. Hope you are well. I've been out of the world of blog loop, so trying to get back in the groove. Talk soon.

Absolutely Gwen! Thanks for stopping by.

So well said,......
Aviary connection among these artists is so unknown, but yes a truth. Amazing the waves of the brain from several artists and their inspirations. A small group or "brainstorming" tight knit discussions were obviously bounced around and evident in the works of these masters.
So different from the influence of modern technologies of today and the outside influences of our time.
Better or not? Too much to focus upon or too much exposure?
An interesting thought, one to be considered.Artists minds of course are stratospheric gallaxy's of worlds of information, creativeness and execution.
Thanks SC; for the post,
makes one ponder.
L.

Courtney this is so delightful. One of my favorite books ever is the Friendship of Matisse and Picasso by Gilot. The only thing missing would be to have the three of them at the party!

L -- If part of what you are pondering is the difference between, say, sharing or brainstorming via snail mail -- creative letters -- and in person visits versus email and blogs and twitter, that would be an interesting thing to explore. Yes, definitely. Thanks.

Karena -- I love it too. Gilot shares so much about the process, how they worked. So interesting!

Me! Other than that, not a thing. Entirely enchanting.

Patricia -- Your name on the guest list goes without saying :)

Another perfectly woven collage of artistic inspiration. This was such a joy to read!

What a wonderful post, I will may be add a bottle of Bandol Rosé. Merci for this beautiful artistic inspiration

Andaluz, a Thonet bench, a color chart and some lanterns what else does a girl need?!