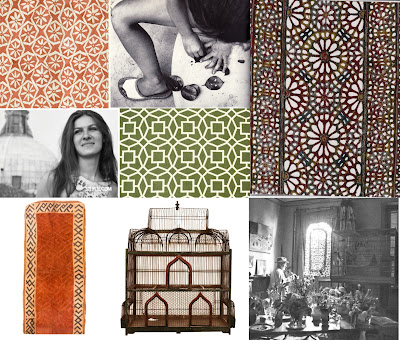 [Click image above to enlarge. Credits follow at the bottom of this post.]
On Tiffany's Paloma Picasso micro-site, the jewelry designer describes her childhood: "Growing up, I thought that in life you breathe, you eat, you sleep and you draw." 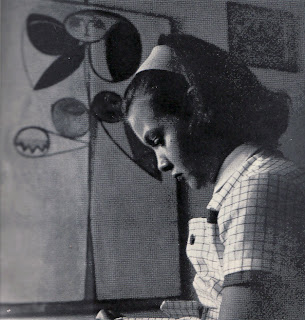 [Paloma Picasso and La Femme Fleur photographed in the 1950s by Robert Doisneau.]
That may sound a bit romanticized but if you've seen a lot of photographs of Paloma as a little girl, drawing alongside her famous father, the words ring true.  Could the quote serve as a jumping off point for the design of a room? I woke up brainstorming the idea. There have already been a lot of Matisse-Picasso references on this blog. (Looking back through nearly four years of past posts, I remembered a Billy Baldwin-Matisse connection.) Still, a specific room loosely based on those archive images of the artists living and working in the South of France is always open to new interpretations. So that's up next. 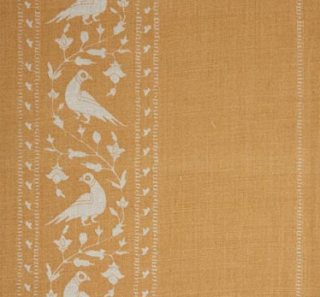 Paloma's life no doubt was inspiring and fascinating from day #1. I love the colors of your inspirations board. Hope your Sunday is a good one!

Courtney, I love your inspiration board and the connections with several favorites of mine!

Every child should be so lucky and deserves to have these opportunities-in the simplest of terms. The board is very inspiring indeed.

I love your post.Just like music, art is food for the soul...

Picture of Elegance -- thanks!

DT -- Enjoy the rest of the weekend!

Karena -- Many thanks, as always.

I was once in the elevator in Tiffany's (NY) with PP and boy , does she have STAR POWER !

Just a delightful post to read. PP. is truly a force of nature. I loved what Dean Farris wrote, STAR POWER! And gorgeous too...A great talent.