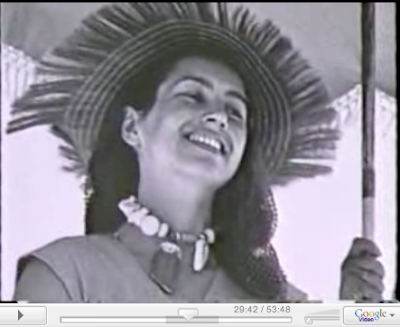 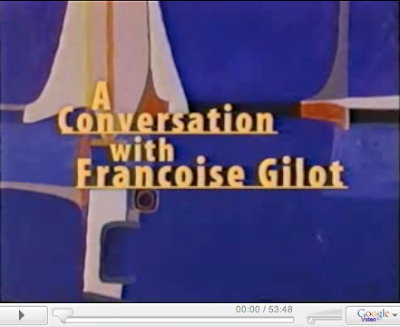 I'm mentioning it mainly because it was a really interesting program -- or broadcast as Charlie would say -- but I also want to draw attention to Francoise's necklace.  At one point during the broadcast, the camera zooms in on the famous Robert Capa photograph and it's possible to get a better look at what she's wearing. I'll leave it to you to compare and contrast the necklace in the 1948 photo with the variation recently spotted up for sale at Christie's. 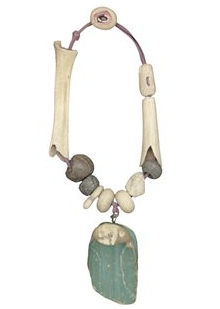 Again, the "Christie's" necklace shown directly above was a collaboration between Gilot and Picasso in 1948. The "owl" pendant (read more about it here) seems to appear in Robert Capa's photograph but the configuration of stone beads and/or bone looks different.

[Image two via Christie's.]
Posted by Style Court at 1:25 PM

I agree it does appear to be different but also a variation of the vintage necklace.
Thanks for sharing,
L.


Love that famous picture of Francoise--madly in love with Picasso at the time--on the beach in the south of France.
Her books offer real insight into Picasso--and especially all the painters and people around them.
She was a young girl at the time and his relationships were previously troubled ones.
Worth it to find copies of her memoirs in used book shops and flea markets--they are great for research and study ... her married and lived in La Jolla for a long time...I would occasionally see her in San Francisco, a rather sad woman, unlike Paloma who would pass through her, promoting her jewelry or lipstick, and was sunny and charming and bright.
cheers, DIANE
www.thestylesaloniste.com
You are on my list of blog favorites on my blog.

The use of the bone is so fabulous, isn't it? Other than the owl pendant, you could whip that right up.

I do see the difference. But what a unique piece of jewelry!!

Beautiful... interesting how those colours are so in vogue for our homes now... it's the palette for so many kitchens and bathrooms... a really unique piece.

I adore this photo.

Amazing Courtney. I also love Francois' art, her strength, the talent. I will listen to the interview. To be married to two of the most powerful men in the world Picasso, and Jonas Salk.

What I would give to have my hands on that necklace! I love the slight asymmetry and the owl is just magnificent. Thanks for sharing.

What I would give to have my hands on that necklace! I love the slight asymmetry and the owl is just magnificent. Thanks for sharing.

Her book, Life with Picasso, is a must read!

I think this necklace is wonderful. Such a unique pairing of materials. Thank you for sharing it.

I have been following your blog for the past year. It is one of the first things I check in the morning. Thank you!

It's been great to hear from everyone and see that you all responded to the necklace too. It really grabbed my attention.

such a fabulous piece and very interesting post... xx

Stunning piece... these two were so creative ...I do see a little difference

Over 30 years ago when I first encountered that amazing necklace I changed the way that I saw jewelry and have been inspired by that necklace to the present day. It has a reality and a connection to Life that is profound. I am so happy to see y'all respond to that also.