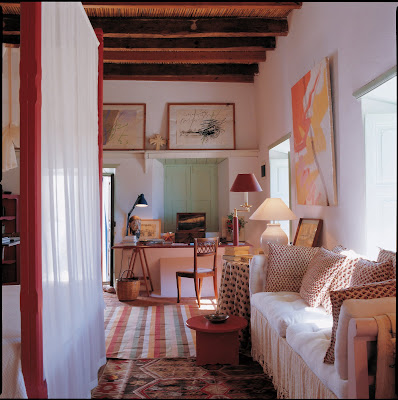 [© An Island Santuary: A House in Greece by John Stefanidis Rizzoli New York, 2010.]
Last year when I saw the preview cover for John Stefanidis' new book,  An Island Santuary: A House in Greece, I anticipated a lavishly illustrated tome that would offer some smart, tangible ideas but mainly give readers a chance to escape. Sort of the decorating equivalent of Giada's vacation specials. Respite from the vitriolic atmosphere we're all hit with every time we catch up on the news. Now, having read it, I have to say An Island Santuary goes far beyond escapism. 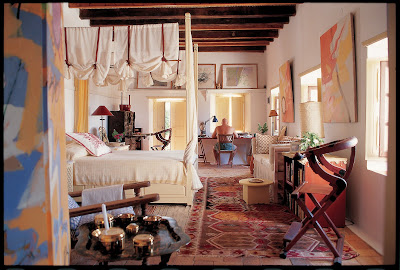 [© An Island Santuary: A House in Greece by John Stefanidis Rizzoli New York, 2010.] 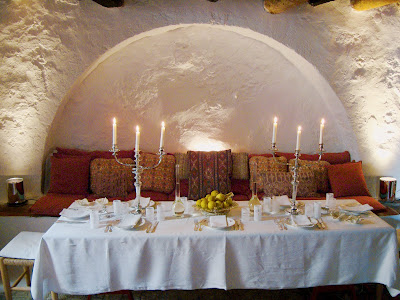 It's about how a house becomes imbued with the spirit of its occupant. 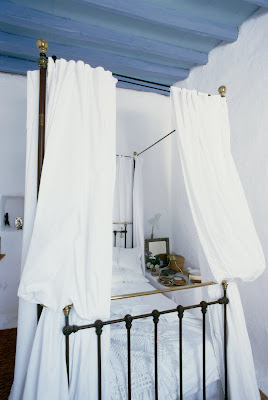 In this case, the house is a 16th-century farmhouse on the island of Patmos lived in for decades by Stefanidis and artist Teddy Millington-Drake (1932-1994), still, Stefanidis is convincing when he talks about all living spaces, one-room apartments included, having the potential to become highly personal sanctuaries. Maybe the unexpected looseness of the rooms is what sold me. (More on that here.) 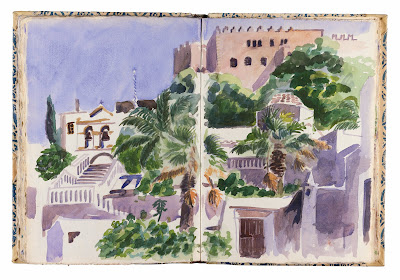 [© An Island Santuary: A House in Greece by John Stefanidis Rizzoli New York, 2010.]
Susanna Moore, the Ernest Hemingway Foundation/PEN Award-winning author, contributes to the book too, covering the history of the Greek island and the restoration of the house and gardens. For architecture enthusiasts she includes details about the local stone, tile and other natural materials and she discusses construction.  For me, as mentioned a couple of weeks ago, elements that really bring the book to life are the cotton fabrics and Millington-Drake's work.

The guest bedroom, shown here at top, was once the late Millington-Drake's art studio. The four-poster Stefanidis-designed bed was made on the island and, as seen in image two, was painted an ecru shade known as "Dust of Paris." A red-lacquer Japanese barber's chair can be spotted in the foreground. Lots of Millington-Drake's abstracts appear throughout the house, and his wonderful watercolor renderings of the island, the gardens and the interiors also add charm and layers of meaning to the book's pages. 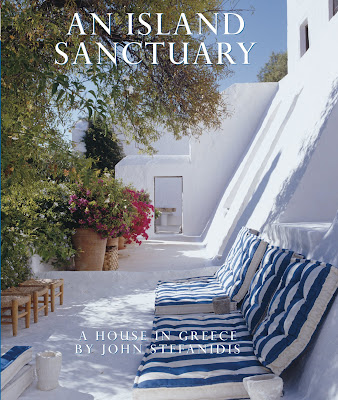 That said, if all you desire is a little escape, a little Fantasy Island,  Fritz von der Schulenburg's photographs provide it.

And there are other beautiful spring releases that we need to explore soon. I expect to see them covered from different angles on many of my favorite blogs, such as The Peak of Chic. 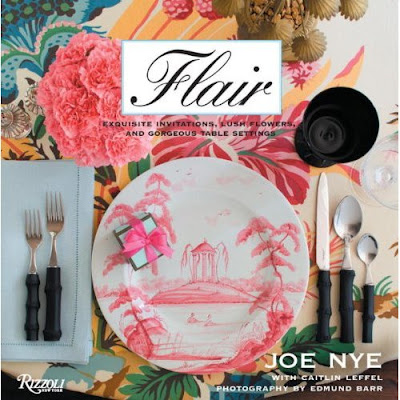 It looks like Mrs. Blandings' curtain fabric (the ever-popular Le Lac) turns up as a chic tablecloth on the cover of Joe Nye's delightfully down-to-earth Flair. It's an illusion though. Just learned Joe's fabric is actually from Travers. (Everyone's going to want black-handled flatware now.) 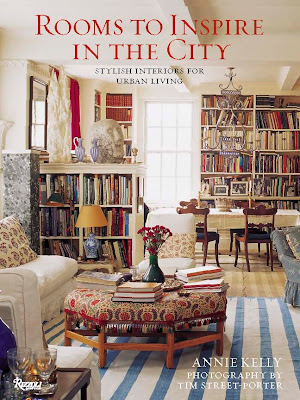 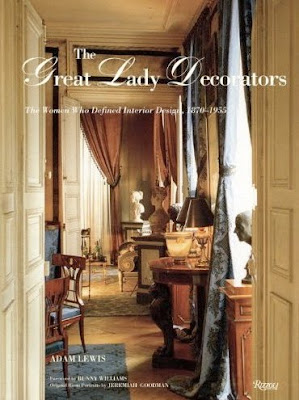 And Adam Lewis' The Great Lady Decorators is an amazing survey of 20th-century design that delves into the history of women in the workforce. If you aren't sure who Candace Wheeler is, or how she relates to interior decoration, you'll know after reading the book. I think this one is a candidate for college libraries. Plus, room portraits by interiors painter Jeremiah Goodman and large photographs add appeal to the in-depth text.
Posted by Style Court at 4:43 PM

Seconding your motion on each of these picks. I ran into Joe in LA and mentioned Le Lac - he says it is actually a Travers fabric, very similar, though the color way is slightly different. And, count me in for the black bamboo, too.

Ah, okay, I'll be revising that line :) So glad you went straight to the source.

I want one bed the same for me ...
Your site is so beautiful
Kiss
melldesofia.blogspot.com

Glad you like the pictures Mellde Sofia. The beds in the book are really dreamy.

The apartment on Rooms to Inspire in the City was featured in World of Interiors a while ago - it's such a FANTASTIC apartment - cluttered, but organised and wonderfully odd and eclectic.

So much inspiration, having been to the Greek Isles twice I can see how much An Island Sanctuary will mean to me. Flair as well!

Giveaway is now up on my site.

All these books are on my list. I love a house "imbued with the spirit of its occupant", you said that perfectly.

Oh goodness...I wouldn't mind a little sanctuary of my own.

So so love that nook with the Moroccan/North African pillows!

Greece is a lovely place to visit and John Stefanidis really evokes a place to escape to, wonderful.