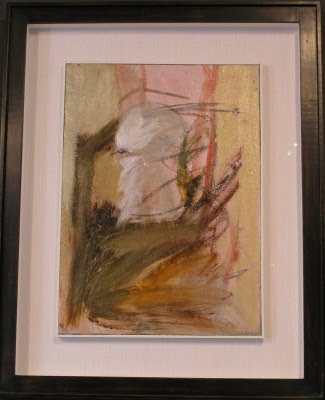 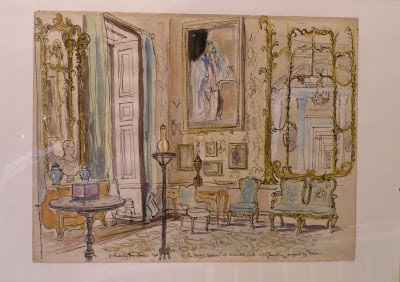 [Teddy Millington Drake, Small Boudoir At Kedleston Hall, Watercolour on paper, Signed and dated 1956, Charles Saunders Antiques.]
One of the upcoming releases that I'm most looking forward to discussing is An Island Santuary: A House in Greece by John Stefanidis. When talking about interiors, many of us say we are striving for rooms that look as if they evolved over time, look lived in, or have a soulful quality. But the 16th-century farmhouse on the island of Patmos purchased in the early 1960s by Stefanidis and artist Teddy Millington-Drake (1932-1994) comes by those qualities naturally. 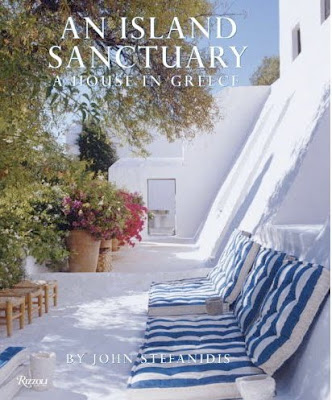 The book has a depth that makes it a standout and, I think, could only come from a designer with decades of experience. This is not a house that was restored in two years then flipped; Stefanidis has been nurturing it for roughly 45 years. And other families inhabited it centuries before that. 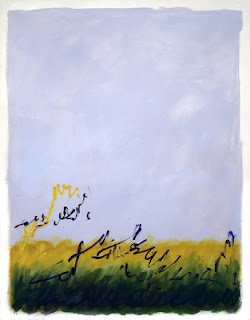 [Teddy Millington Drake, Oil on canvas, Charles Saunders Antiques.]
So why all the examples of Millington-Drake's work? For one, it has a lot to do with the spirit that permeates the Patmos house, in combination with Stefanidis' flair for mixing his own fabrics with crisp white Greek cotton, striped dhurries, and other textiles picked up across the globe. During the next couple of weeks I'd like to share some of my favorite rooms (including the late Millington-Drake's former studio that Stefanidis gently converted into a guest room) and of course the magical island gardens. Today, though, I'm leaving you with words from Stefanidis' preamble. 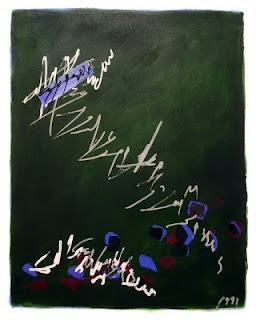 [Teddy Millington Drake, Oil on canvas, Charles Saunders Antiques.]
A house lived in for decades by the same person, or indeed centuries by the same family, emanates an atmosphere of old loves, lost friends, past thoughts, agreements and disagreements, happiness and misery. It is a palpable and telling atmosphere that can be sinister and threatening, joyous and soothing. A happy family will have a happy house, regardless of taste and decoration. Sophistication and style are not always analogous with happiness, which springs rather from comfort, good manners, colors that please the eye, works of art, flowers, and cherished objects...

--  © John Stefanidis from An Island Santuary: A House in Greece published by Rizzoli New York, 2010 .

There is also a catalog, published by London's Lefevre Gallery to accompany the 1990s show, Travels with Teddy Millington-Drake: A Memorial Exhibition, but I haven't seen it yet.

As I was finishing this post, I remembered that months ago photographer Miguel Flores-Vianna made a lovely reference to artist Teddy Millington-Drake, over at Mrs. Blandings. It also seems that she and I both came across the nicely detailed obituary in The Independent. If you are interested in learning more about Millington-Drake's work, it's a good start. He is known for his representational watercolors, such as his rendering of Kedleston Hall, above, as well as abstracts and partially calligraphic works.
Posted by Style Court at 11:47 AM

I admire Stefanidis's sense of colour and texture. Although his style is quite theatrical, there are always lots of interesting details in his rooms. Perhaps this is what gives them that lived-in feeling?

Emile, yes, lots of interesting details. The thing that is so striking about the Patmos house is how uncontrived it feels, at least to me. Very fresh, natural, and extremely personal.

I forwarded the details of the Millington Drake watercolour of the Small Boudoir at Kedleston to the relevant curators, to see if it was worth acquiring. They said that it doesn't really show us anything we don't already know, and as it is quite pricey it would be better to save our money for another day. But it was worth considering, so thanks for the tip-off.

I thought TMD's contributions to the house some of the most compelling. I had to leave it at home for the Dallas trip, but it is waiting on my bedside table. Looking forward to your observations.