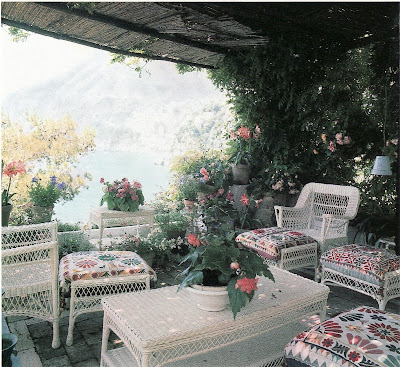 [Zefferelli's Italian villa photographed by Horst and published in Horst Interiors.]
I thought this morning I'd offer you a little virtual spring break and follow up on this past post by sharing Horst's photograph of Franco Zeffirelli's Italian veranda, circa 1974. 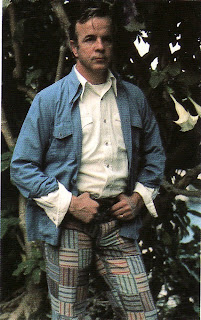 [Franco Zefferelli photographed by Horst as seen in Horst Interiors.]
According to Barbara Plumb,  Indian and Far Eastern textiles were prominently featured throughout the director and set designer's three interconnected villas tucked away just outside Positano, Italy. Vividly printed Indian cotton cushions were chosen for the traditional wicker furniture shown at top. (I know that, being the early 70s, Zefferlli's pants were probably inspired by Early American patchwork, but the graphic pattern reminds me of this African textile, too.) 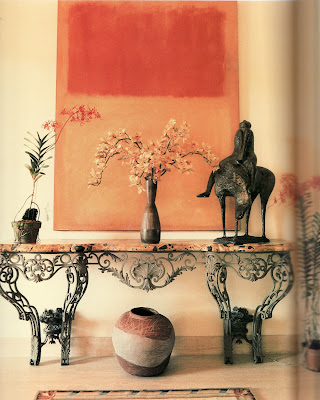 [Photo by Horst as seen in Horst Interiors.]
To follow up on this post, I also want to mention Enid Annenberg Haupt's "living" still life, photographed by Horst in 1973. Here she balanced the simple, straightforward lines of her Rothko with the udulating curves of a Louis XV console and the organic forms of her prized orchids. The stripes of the Rothko are echoed by the minimal pattern on a piece of pottery placed under the console, and rounding out the mix is a bronze by Marnino Marini, Horse and Rider.


Update:
Thanks to Janet for reminding us that Enid later gave her Rothko, Orange and Tan, to the NGA.
Posted by Style Court at 8:06 AM

The veranda is certainly charming, but I'm taken with his pants! I love that print.

The combination of the soft, luminous Rothko with the graphic lines of the console table is wonderful. But just imagine how shocked Rothko himself would have been, as a dogmatic Modernist, to see his art in such an elegant setting!

J -- I know! I forgot to insert a line about the pants and just went back and did so :)

I absolutely love the pants. Such a perfect ensemble for the Italian coast!

Funny that his pants would get so much attention. I was so surprised expecting a suave Italian ensemble. They do have a rather snug fit.

Yes the plaid pants are so fun and love them! Almost anthing goes with Italian. My heart is really fluttering at the Rothko though!!! You have no idea how this speaks to me.

I love the mix of the Rothko and console. Beautiful together.

I second Laura Casey's comment. The juxtaposition of the Rothko and the console is so enticing.

I have always love the photorgaphs of Haupt's house. Incidentally, the Rothko painting (Orange and Tan) is now in the National Gallery's collection: