If You're in Savannah 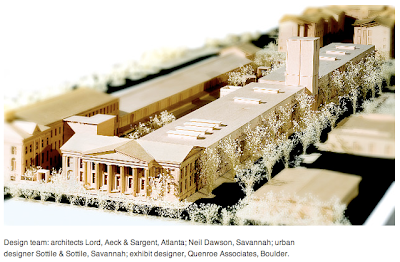 [Photo via the SCAD Museum of Art. Click to enlarge.]
The model above offers an approximation of what visitors to the SCAD Museum of Art can ultimately expect to see in the next few years. In January, the museum broke ground to expand its facilities and make a new home for a nationally acclaimed collection of African-American art donated by Savannah native, Dr. Walter O. Evans. SCAD also has interesting plans to adaptively reuse the 19th-century Central of Georgia Railroad depot, positioned behind the current museum.

If you're unfamiliar with SCAD and the museum, there really are so many treasures to be aware of. In addition to the Evans Collection, there's the the C.Z. Guest Collection (fashion), a mixed media portrait of Dora Maar by Picasso as well as a de Kooning, and a significant collection of early American portraits and 19th-and-20th-century photography. But decorative arts enthusiasts should investigate the frames. Yes, the frames. The museum owns nearly 150 period frames from the 17th through 19th centuries (mostly English). Also not to be missed:  a pair of mantelpieces and architectural woodwork by furniture maker Thomas Day, one of the antebellum South's most celebrated craftsmen who happened to be a free African-American.

The first phase of construction is scheduled to be complete by the fall of 2011, according to Savannah Morning News.
Posted by Style Court at 10:38 PM

Courtney if only I could travel all over to the wonderful exhibits you keep us up to date about! Thank you!

Very cool. I love the glassware in the Kay collection.

This looks to be quite something. I have procrastinated about a post on Thomas Day-his shop is about 15 miles from here, and I have several friends with houses attributed to him. pgt

After visiting Savannah this past summer and lurking around SCAD for a few days I wish I had gone to school there. Such a great place!