Fonts Instead of Faces 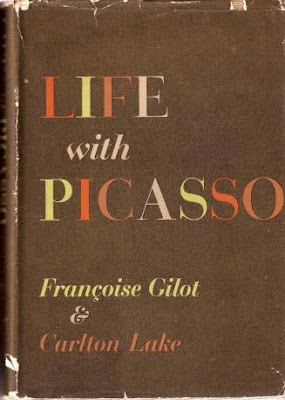 [Image via Fenwick Books.]
It's no secret that I'm fascinated with the graphic design of vintage book covers. When I find a book that I truly want to read or use as a reference, and it happens to have an aesthetically pleasing cover, that's the best of both worlds. Since I don't begin to have enough shelf space for all of my books, many of them end up scattered around on tables, chairs and benches, and I have no problem admitting that I enjoy looking at the covers whenever I pass by. (Remember Andy Spade's exhibition of book jackets?) 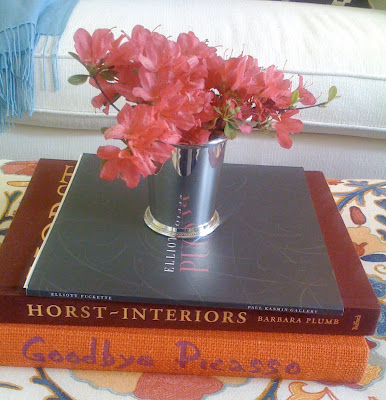 But this post isn't supposed to be about living with books or the personal warmth they bring to a room. We've covered that territory before, and Annie Kelly's new edition, Rooms to Inspire in the City -- with the cover we all flipped for -- has a really nice chapter on the subject. I'm currently stuck on the differences between old book jackets and contemporary versions. In this past post I contrasted the mid-20th-century dust jacket for The World in Vogue with the design for the second edition released in 2009. 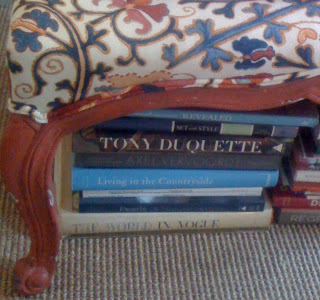 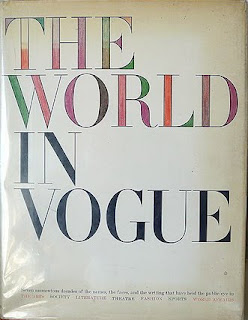 Decades ago, subtlety ruled. Now we're living with the Cult of Celebrity, so personalities tend to make the covers. Recently, I found an early edition of Life with Picasso. In true 1960s fashion, the first design is all about the graphic simplicity of multi-colored fonts. Later editions feature a striking photograph of author and painter Francoise Gilot with Picasso. You're probably thinking, "Well,  doesn't a picture of the subjects make perfect sense for Life with Picasso? Given the nature of the book?"

[Image via Amazon.]
It does. I'm just intrigued by the change in tastes and marketing strategies. Covers without the people pictures offer a sense of mystery and temptation; we have to open the book to see which photographs, if any, were included. 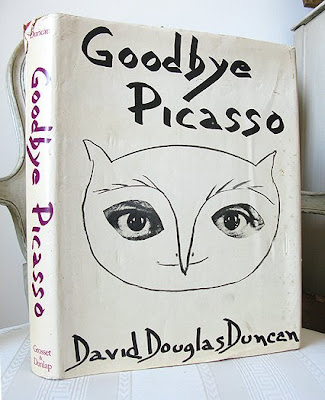 [Image courtesy Paris Hotel Boutique.]
Again, the dust jacket for David Douglas Duncan's Goodbye Picasso is special because it was created using Picasso's sketchy self-portrait as an owl combined with Duncan's photograph. Under the dust jacket, the book was bound in jute dyed to match the background color from a Picasso portrait. (Images here.) Below are other book jackets that embrace letters. 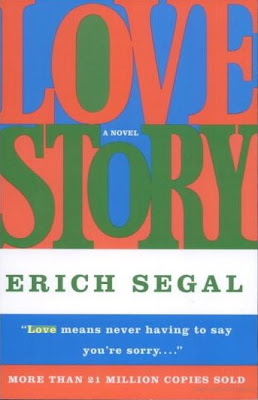 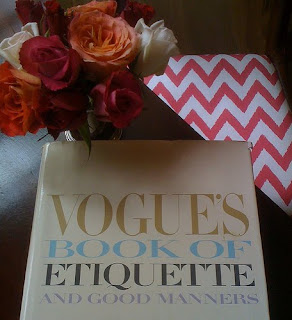 Of course, I've been using a magnifying glass to look at the bookshelves photographed by Tim Street-Porter in Rooms to Inspire in the City.  As mentioned here, many of the houses and apartments included in the book are old favorites but we get to see new details, new perspectives. 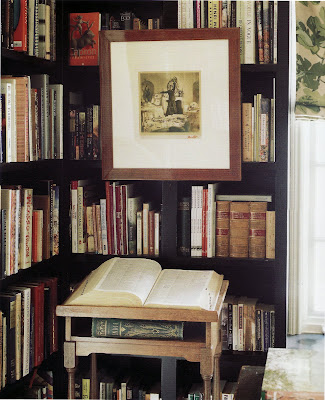 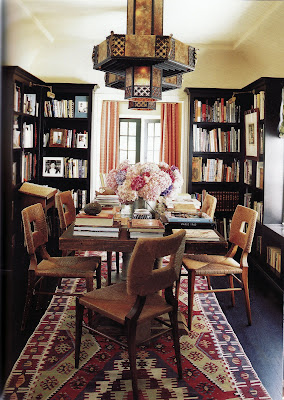 [Photographs by Tim Street-Porter © Rooms to Inspire in the City Rizzoli New York, 2010.]
It looks like Peter Dunham has an early copy of The World in Vogue as well as Picasso-related titles. (Now I can't get the idea of black bookcases out of my head.)
Posted by Style Court at 7:40 AM

Interesting thought on the loss of people and or pictures on the covers. I wonder if there is a big blank computer somewhere that takes in all the data and trends when turning to a new look or style for a cover? Is it the design trends, bold graphics or the more connected and vintage feel of a cover that draws the reader in?
Perhaps we will never know, but I am sure that some sort of demographic is applied and carried through when deciding to alter a favorite cover.
I am fascinated by both, the pictures are a mere sneek peek into a book and the graphic, bold or not so bold cover or spine is also as equally attractive to a color scheme.
Those black bookcases seems to be the eyeliner for all the various hues of the eyes of the books; colored or not, bold or faded and big or small the black seems to draw the viewer to each individual book and consider it?
Thanks for this post,
I think the black bookcases are very deliberate and equally stunning!
L.

Can't wait to get that book! My World in Vogue dust cover is in tatters-I can not bear to part with it. I love your detective work Courtney!

Books are art, and that is why I love them and have them all over my house.

I seriously do investigate bookshelves with a magnifying glass ! Glad I'm not the only one. Or if you were joking, please don't make fun of me ;)

Love that Love Story made this post! I wish I could open many of the books in your post, particularly Vogue's Book of Etiquette and Good Manners. I off to search for a copy...

somewhat along these lines. But nearly no text, which is why I could pick up one more blog.

The older covers seem more like art. And I hate it when they make a movie of something then put a still on the cover. Hate. It.

Love the books! And love even more that your azaleas are blooming!

I can't believe how many of those I've read!

I think book design is beginning to move back towards strong graphics and fonts (such as the new Penguin classics). But, beautiful photographs will always sell books.

The black book cases are divine. I think they work perfectly because the don't go all the way up to the ceiling.

i have many of the books you write about and adore reading your appreciation and thoughts.

And thanks everyone for these terrific insights.