[Screengrabs from a video about A Single Man]

My friend Alli just reminded me that A Single Man, Tom Ford's visually stunning adaptation of Christopher Isherwood's 1964 novel, is currently playing in Atlanta at the Tara on Cheshire Bridge Road. Read what NPR had to say about the film here, see a trailer here, and see some eye-catching stills here. Apart from the meaningful story, this is a must-see for anyone interested in 1960s aesthetics. I expect opportunities for sculptural sightings -- lamps and art, not just Julianne Moore's hair.
To explore other bold lamps and mid-century chinoiserie, click here. 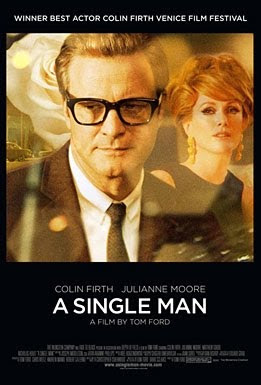 I have seen the Bright Star DVD, and while I'm disappointed that the extras (the featurettes) about production and costume designer Janet Patterson are brief and essentially the same material offered on the film's website, it is a treat to be able to pause and linger over the many striking details we all noticed on the big screen. 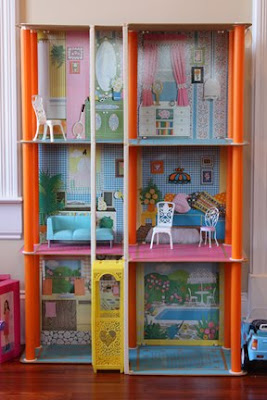 Love affairs with houses, albeit far less sophisticated ones. Did yours start with this? As soon as I saw the yellow elevator, a flood of memories came back. Read Ellen's post about what was for many people the original dream house. I'll leave it to you to dissect the pierced (trellis-like) functioning elevator and Adler-esque ironwork chairs.
Posted by Style Court at 2:45 PM

I have been meaning to go but have yet to make it. Looks to be a visual feast! Enjoy!!

I still have not seen A Single Man and need to snap to it. That and plan to also rent A Bright Star. Thanks for the well needed reminder.

Don' forget the popcorn & have fun @ the movies ~

I've been recommending this movie to everyone since seeing it 2 weeks ago. It's brilliant: great story, great acting and BEAUTIFUL sets and filming!

It is like a long Tom Ford ad. Some might think that is a bad thing- but it was AMAZING! Every detail- from clothing- to hair- to acting is flawless.
Julianne Moore's house is to DIE for as is Colin Firth- each for different reasons.
Being that I grew up in LA- it really made it have a romantic feel. FAB movie- should win awards!

I had that exact Barbie townhouse. And a pink convertable! Gosh I loved that thing. Thanks for the memories.

Regarding Ford's film, I've heard that at it's core it's about appreciating small moments -- just my thing -- so I can't wait to finally see it.

Regarding Barbie, did anyone else have the pool or the convertible? Janet mentions the pink convertible...

Oh and the thumbs up from Grant and Stefan really make me anxious to see it too!

DT and SC -- enjoy your weekend. Hope you can catch the movie.

I had the house...it's actually still in my parents basement. A little worse for ware 30+ years later. The funny thing is they are making them again but they are all plastic. Mine was a cardboard walled but plastic frame/structured piece. So long ago I don't remember if I had the pool or car. I just remember there was a box of then current Richie Rich and Archie comic books that sat beside it and the horrible things that my older sisters would do would Barbie & Ken;)
Thanks for posting the picks...good memories. I always thought of it as being New Orleans.

I can't wait to see it. Thanks for reminding me. Hope you are well and have a great weekend. I've been slammed this week so haven't been talking to my blog friends as much. I've missed you all! Talk soon.

Woo hoo, thanks for the shout-out, Courtney! I can't wait to see it again... it's just beautiful. Don't miss it on the big screen, y'all!

Genius thinking to include the Barbie house--I had one with an escalator--might have been a store now that I think about it.