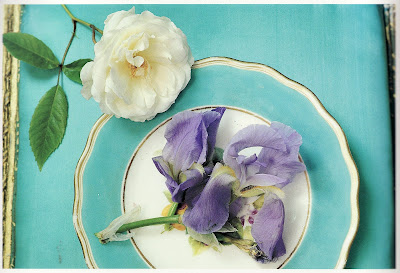 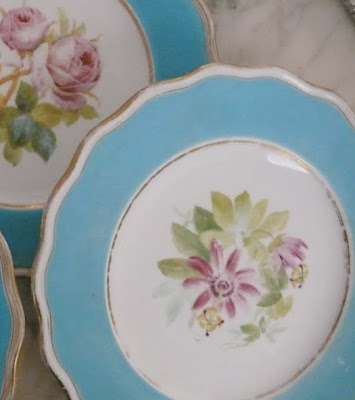 Wendy Cook, curator at Worcester Porcelain Museum, has shed some light on the dessert plates Carolyn Quartermaine picked up years ago in Norfolk, England. In part using the markings on the back of the plates, she determined that they were made in 1868 (as a reader had estimated here). She also said they are very good quality English bone china with hand-painted botanical centers, probably made in Staffordshire.

Cook explained that Royal Worcester did make similar sets, but she would expect the antique plates to have had a factory mark and a handwritten design number on the back, which would enable her to trace the design. And although this type of plate was made by several different factories in the 19th century, the shape of the plates suggests they were not made by Worcester.

So very interesting. Perhaps a comparable look, since we can't 'order' the original, could be found in Wedgewood's Ulander Powder Turquoise... or at an even better price point, Delfina Dinnerware in Sky Blue