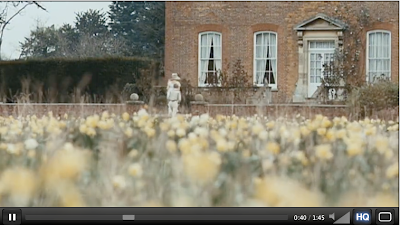 Bright Star is scheduled to be released on DVD on Tuesday, January 26 with one of the special extras reportedly being a "setting the scene" featurette. Let's hope the featurette is nice and long and includes plenty of commentary from production designer Janet Patterson, who also did the much celebrated costumes. (Read about her dual roles here.) 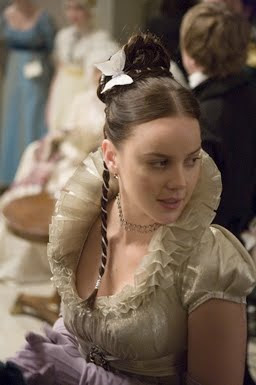 For me, the aesthetic draw of the film was the juxtaposition of masculine and feminine elements, and the mix of the unadorned with the richly detailed. Many critics have said that director Jane Campion's approach to authentic period details is part of the poetry of the movie. Art historian Craig Hanson told me a while back that he thinks Campion is on target, and, in case you missed this in December, he said:

"I think what's so striking to me about the Campion film even now is the degree to which it evokes a period when things were made by hand." 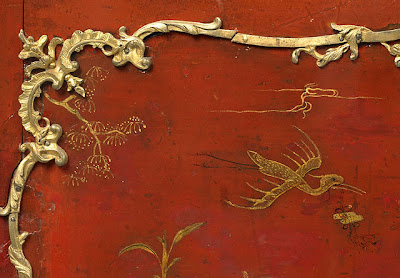 Hanson also noted that it's probably difficult for lots of people to appreciate lavishly ornamented Baroque and Rococo pieces when they appear in films set a few decades before Bright Star because rather than seeing wood, bronze, silver, and gold transformed into something fantastic, they just see 'gaudy' as a category that they associate with bad machine imitations. 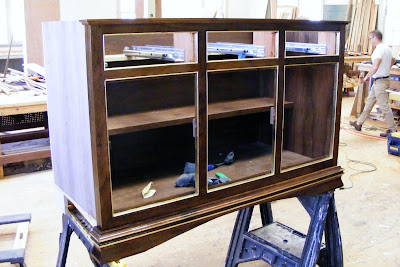 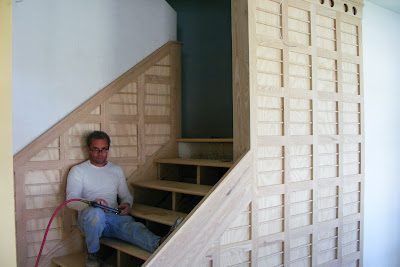 Recently, cabinetmaker Matthew Thompson wrote to me and said he worries that many people don't realize high-quality, truly handmade furniture is still for sale in the 21st century. 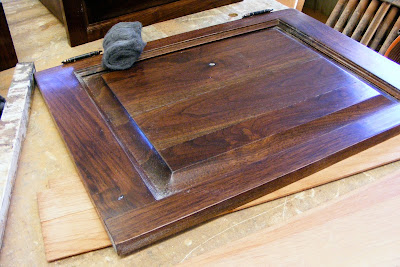 He had some behind the scenes images that I'd not seen before. 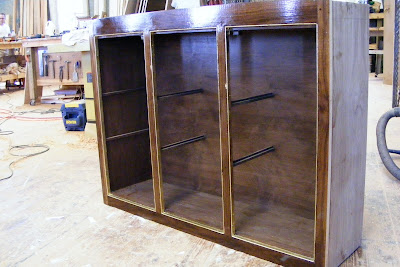 To say Thompson has lived a rich and colorful life so far is an understatement. Ask about a drawer detail and you may learn about the time the Arkansas-born craftsman had lunch with Andy Warhol. 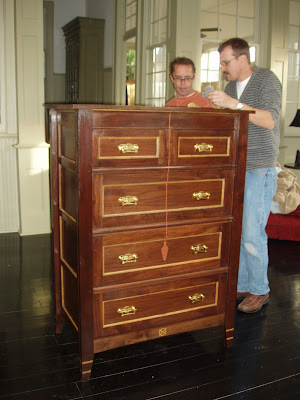 Thompson was raised in Southern Arkansas, in a little delta cotton town called Pine Bluff, and he spent most of his childhood and "rattled youth in and around small country towns, signing up for summer reading at the local libraries." 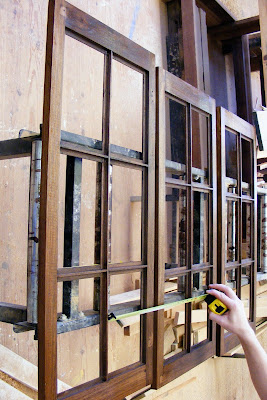 He continues, "I walked a million miles as a boy across 100 million fields, red clay berms, and tree lines, and still, today, I am greatly affected by the endless Arkansas/Mississippi Delta with its quiet, sparse, rhythmic beauty." 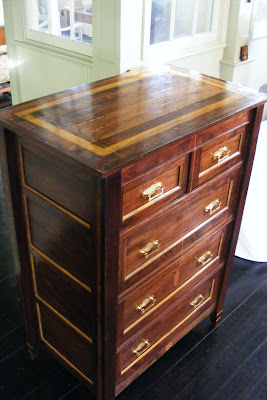 Self-taught, he has been working in and around cabinet shops since he was a young boy and he has had his own shop, Louisiana-based Silvarum, for over 20 years. Clients include "...well-known decorators, architects, builders and contractors, plus young couples and single people of all incomes and ages. They tell me what they want, and I try to give them exactly that. I always have them over to the shop to look at their piece as it's being made, so they can make any changes or simply get a feel for how large it is. As it happens, I do most of my work across the South, but I do have work sent elsewhere as well." 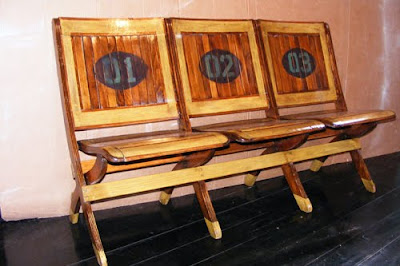 Occasionally Thompson gives his "‘Countrypolitan" work to friends and family, including former girlfriends because, as he puts it, "They have put up with me all the time I was with them. All of them get something when they marry or have children, as I have remained on good terms with them." 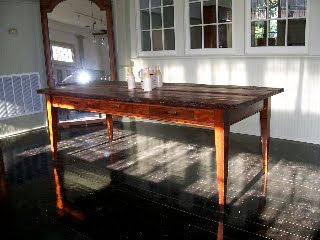 "Everyone who works for Silvarum has the right to make anything for their family or girlfriend in the shop, after work, and I’ll usually stick around and help on the tricky stuff. Often, years after they have their own businesses, they will come in with a question or ask for help on an incomplete piece, and I’ll find myself trapped by it all, reaching out to them through the mist of years gone by." 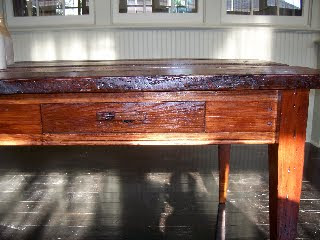 He most always finishes his pieces with a French Polish, which he describes thusly:

"In the simplest way of explaining it, [French Polish] incorporates successive applications of shellac, one after the other, interspersed with sanding and buffing between each shellac application. The sanding is usually done with a very high grit paper (#320 to #400), followed by the buffing in which I use a extra fine steel wool. I usually apply eight to ten coats of shellac."

And he continues, "To color the piece, I use aniline, water-based dyes, not conventional stains. Because they are water-based, the dyes infuse into the wood fibers giving the wood a clearer color. The highs and lows of the grain are more visible. Stains sit on the top of the wood, never settling into the fiber, and tend to cloud the grain in softer grains, like pine or fir. Vivid colors are able to be mixed in aniline dyes, too, something you can’t get with stains." Thompson also mixes his own dyes by hand.

If you are interested in commissioning furniture or millwork, contact Thompson at Silvarum.llc@gmail.com. To learn more, see Haskell Harris' past blog posts.
Posted by Style Court at 11:18 AM

Courtney I am always thrilled to hear of modern day craftsmanship and their medium/application. Beautiful work!

Courtney--I am new to your blog which I found out about from Amanda Talley--
I am SO happy to have found it--As a designer living in Lafayette, LA, after 8 years in New York, I REALLY need to be inspired again! you do that for me..so thank you--I also know Lisa diStefano well and love her work so I've been happy to see her pieces on the blog several times-
I am very excited to see this post on Silvarum--I have been looking for a great furniture maker in Louisiana to use for my projects here--where is his studio?
thanks-
Jeffery McCullough

Hi Jeffery -- thanks! Matthew is in New Orleans but works throughout the gulf states. Hope that helps!

Also, yes, I'm happy to hear from another Lisa fan.

Courtney, this is one of your "total package posts: poetry, romance, craftsmanship, French polish. Matthew Thompson reminds me of this from Quinlan Terry. "People ask, 'How can you find men to do your class of work these days?' as if men no longer can or want to produce skilled work. The truth is that whenever there is good work to be done there are men to do it. We have never had difficulty in obtaining first class joinery ... same goes for plasterers, bricklayers, slaters, stonemasons and even woodcarvers and coppersmiths. Generally, I find that the more intricate the detail, the more willing the tradesmen are to take on the work."

Terrific quote Terry. Matthew will like it I think. And I love your description of this post! Just love it.

Pine Bluff...that's close to me! I'll have to visit Matthew when I'm in New Orleans next. Thanks for the great post. You are an amazing inspiration. Hope you have a great week.

Thanks Gwen. Hope you and Matthew can connect.

Hi Courtney - thanks for brining up the importance of good crafsmanship and the value it brings to the piece. There are several furnishing companies that still value this, such as Rose Tarlow...

What a lovely post. I love how you juxtaposed the idea of new beautiful, handcrafted furniture with the artfully made, antique furniture in the film. To me, the best designs result from the tension of opposites. This post reminded me of the new film, The Young Victoria. If you get a chance to see it, I think that you would love it.

that movie was so stunning, and it's absolutely fascinating to see the process behind such cinematic beauty. great post, thanks so much for sharing my dear!

This is so true and so right on; there are many things out there that are truly heirloom quality, it is like a hunt for the consumer these days to seek quality and to capture it. Is it a evryday occurence? Not so much; but if you seek it their is quality out there. Great piece and information.
Thanks!
Leslie