Give Them Something to Talk About 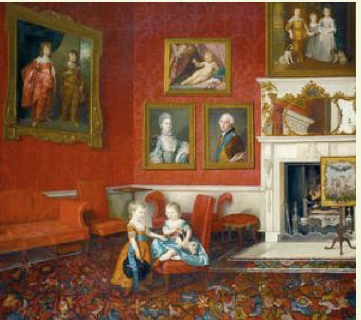 I'm ending the week with another link to Enfilade and editor Craig Hanson's mention of the exhibition, The Conversation Piece: Scenes of Fashionable Life. Centuries before Bravo's "docu-dramas" and the lifestyle magazine spreads that are often carefully choreographed to make us, the viewers, feel we are seeing the subject off-guard in a rare and private moment, those who could afford to do so commissioned a specific type of portrait: the Conversation Piece.

In The Sunday Times, Anna Burnside notes that Conversation Pieces differed from stiff, run-of-the-mill portraits in that they were filled with aspirational details -- lush interiors, family and friends casually strolling in the garden or enjoying a dinner party.

Johann Zoffany, a master of the genre who rose to prominence in England during the 18th century, painted the red interior, or more specifically the newly decorated Queen’s Second Drawing Room at Buckingham House, shown at top. Click here for details about the furniture, carpet and wall covering. And be sure to use the zoom feature to see the artist's use of reflection above the fireplace. Zoffany depicts the heirs to the throne in a more casual manner and they are a bit swallowed up by the room. 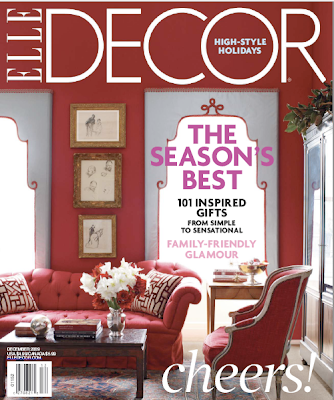 Does the red on red remind anyone else of Elle Decor's December 2009 cover with interior design by Miles Redd photographed by Miguel Flores-Vianna?

Click here for all of Craig's commentary and helpful links.

When I receive a December issue of any decorating magazine that does not include red on the cover, I am always a little disappointed. For me, red still means Christmas! Thanks for the great comparison!

Oh, I love that color! I am a sucker for that dyed to match sophisticated color story!
pve

Oh yes, especially the deep rich reds and other variations of this color of love and joy!

I usually dislike red on walls. It can so easily go so wrong. Too many friends have slapped it on the walls of their first homes, nailed up, perhaps, a large photo collage frame on one wall, and left it at that. It's such a strong color that (IMHO) it needs to be broken up with pictures, mirrors, bold curtains. The ELLE cover gets it so right, in a way that I didn't even think possible. In fact, I'd love to see pics of more red rooms in your holiday posts!

I can totally see that correlation between the two!
Like the color,
Leslie

What about those AMAZING widow valance things??!! I never seen anything like them. So Chic!

Yes, please tell us, what are those "valance things" did Mike Redd cook them up? It's so unusual to see a valance but no drapes...are they in the Praz's book?

Hi Anon -- the books Aesthete suggested are both about a genre of painting known as Conversation Pieces.

What you see at the windows in the Redd room is all fabric --Kravet silk. David Haag Workroom did them.

In the 1990's my late stepfather's sister sold the portrait of Sophia Dumergue by Zoffany - one of his most celebrated portraits - the girl is 12 in the painting and her cat is on her lap - I cannot believe it sold for only 10,000 lbs. sterling! That seems like a pittance - it is now in a British Museum.

Suzanne -- What a interesting connection! Thanks for sharing.