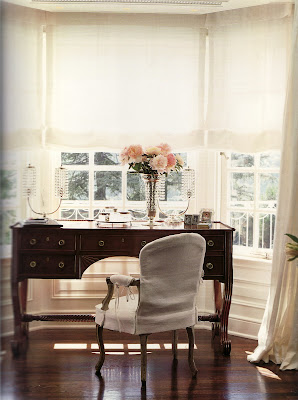 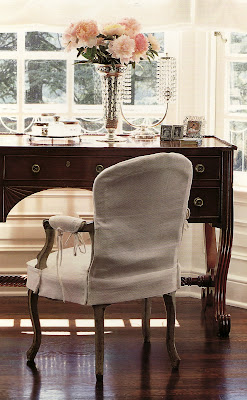 Chair slipcovers with feminine dressmaker details were especially popular in the 1990s, and obviously in many circles they've never fallen out of favor (Suzanne Rheinstein is a fan), but by nature they are breezy and laid-back and therefore, some might say, at odds with the clean-lined mid-century-modern aesthetic and high glamour that dominated the last decade. 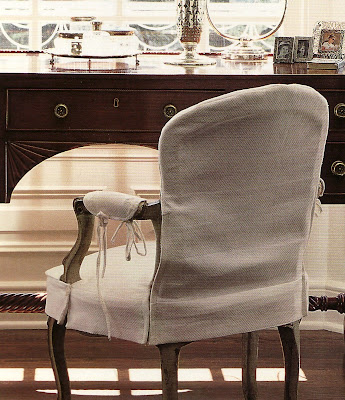 Although I'd say the Michael Smith-designed slipcover shown here is as chic as a Vera Wang. (Note the expansive window in the image at the top; this L.A. house was designed by architect Paul Williams.) 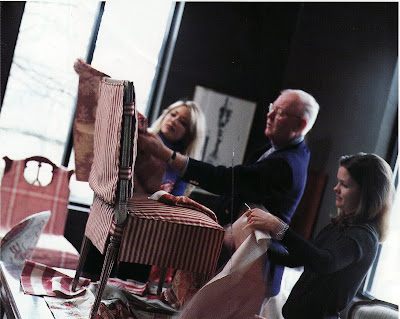 [Above, Dan Carithers, Caroline Ritter and Mary Elizabeth Stevenson photographed by Deborah Whitlaw for Southern Accents. Below, a Cheryl Dalton photo from the same issue.] 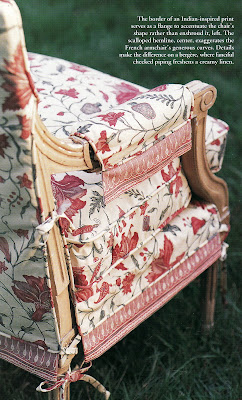 Cotton or linen slipcovers are very Southern too. Historically they were used during long hot summers to make heavy velvet-upholstered furniture cooler to the touch. Since they are also typically associated with the country house look, slipcovers sometimes get the granny label, but again, if you think about all those discreet slits that reveal a hint of the chair's frame, they are kind of sexy. 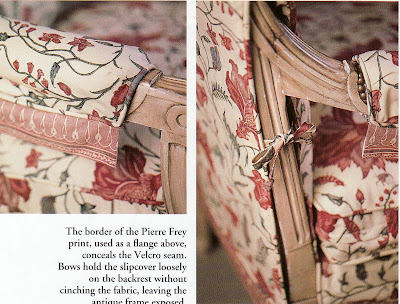 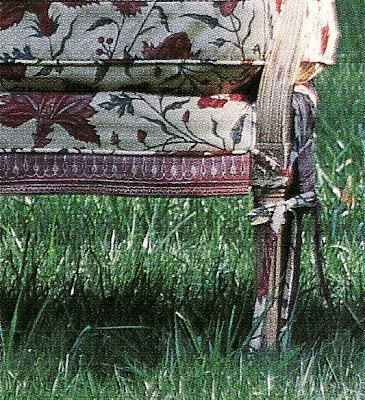 Apart from the potential to be easily washed (if a slipcover is made from machine-washable fabric it can be laundered frequently at home), slipcovers have appeal because they can lend a softer, yet impermanent, dressed-down appearance to a fussy piece. For example, an ornate damask-covered gilded chair inherited from a great aunt that just isn't your style. 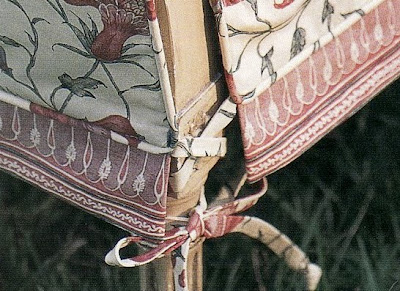 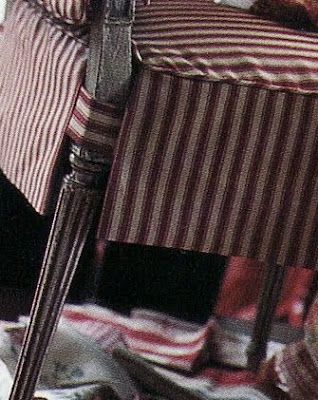 And they allow you to change a room's look without buying new furniture. 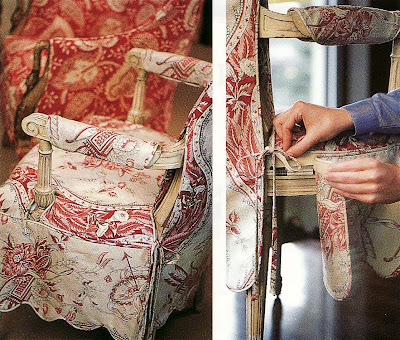 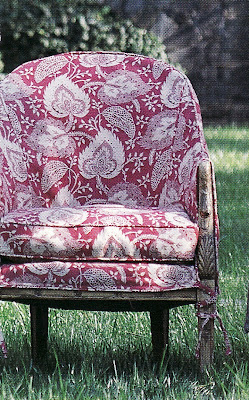 Just know that, depending on the amount of fabric needed and the couture details you may choose, having a slipcover made can cost the same as (or in a few cases more than) full on upholstery. 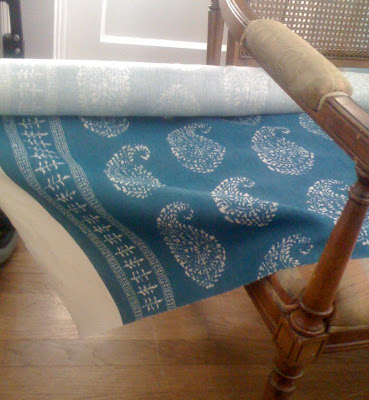 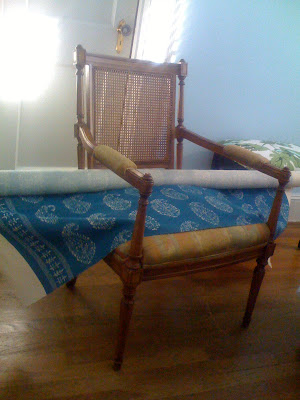 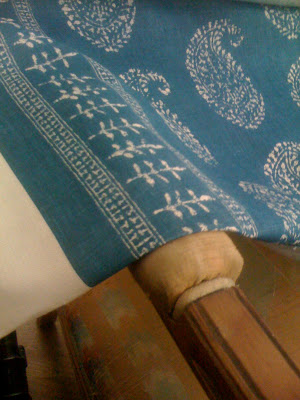 For Christmas my parents gave me some Peter Dunham fabric, Kashmir Paisley in peacock (not going in the blue room seen here). To maximize the print's border, I'm going to have a chair seat slipcover made, as well as little covers for the arm pads. Like choosing a dress, pondering all the options is half the fun -- even if in the end the decision is to go with something really restrained.

While scrolling through this post, if you've been thinking the pictures look familiar, yes, they were cropped from very dogeared tearsheets: Cheryl Dalton's photographs of chairs on the Swan House lawn. All of the slipcovers were designed by Atlanta-based decorator Dan Carithers, and Lydia Langshore wrote the story for Southern Accents. Deborah Whitlaw shot the indoor pictures. 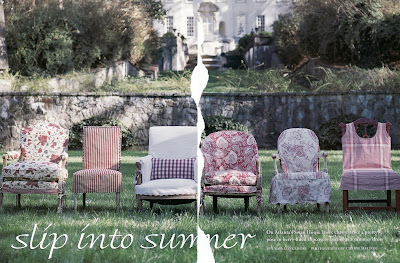 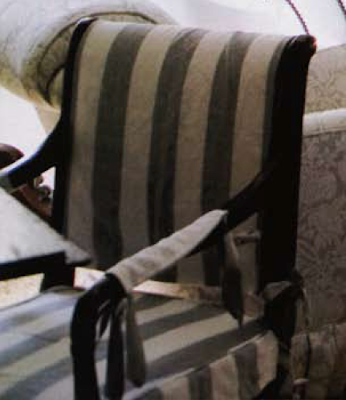 Above, a grainy view of a Windsor Smith slipcover cropped from Vogue Living, fall 2006. As mentioned in the previous post, Windsor never abandoned them. Below, New Orleans' own Ann Holden and Ann Dupuy used a lushly textured slipcover on a chair in a glamorous red-lacquered powder room with a brick floor. It does bring a certain looseness to the room. 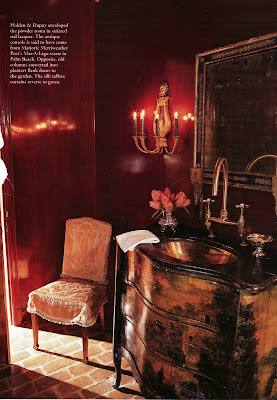 Now, for an about-face. As much as I love the relaxed country house look, as well as Jane Scott Hodges' heritage chic highlighted in Victoria, October 2001... 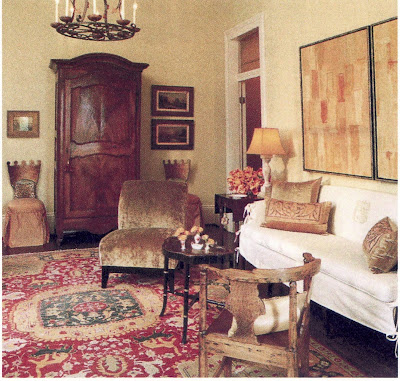 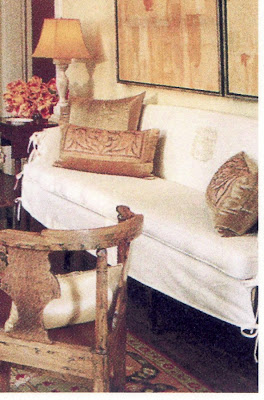 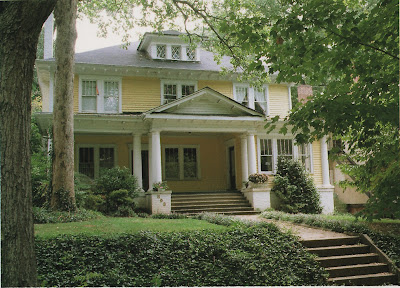 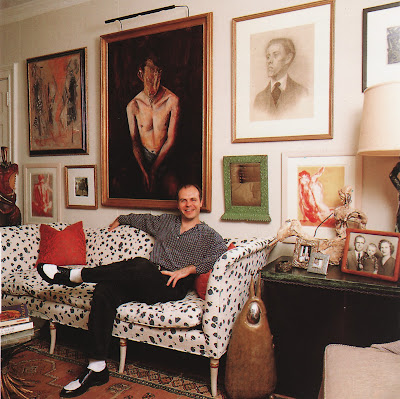 I still completely appreciate the fantasy and explosive drama of Kelly Wearstler's Hue, so excuse me while I get lost for a while in the powerful colors (and the children's books). 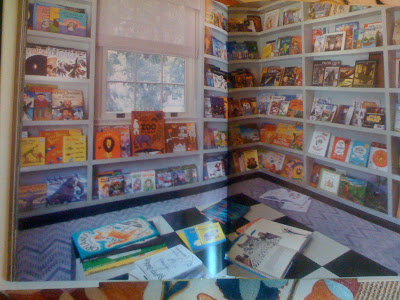 The border is going to be totally knock your socks off - I can't wait to see it.

Patricia, glad you are as enthused about that border as I am! I'll try to make wise choices :)

It's so worth the cost for the custom cover. I've sewn for others and now that I design for clients sometimes the true value is missed.
It's like your example of a custom garment details and that's the point of pleasure. Top stitching, perfect length of slip cover, tie backs, velco straps, or buttons or pleats.

Your chair fabric is fun, it's going to be a perfect fit. Looking forward to seeing the finished cover.

Ideezine, thanks! You're so right about a well tailored fit and the details. Even if one wants a slouchy look, I think fit is key.

one of my favorite SA stories ever!!!! Dan Carithers AND slipcovers - what could be better. I'm so going to love to see this finished esp. the arm covers!!!!!!!!!!!! and I love tabs so that the wood remains exposed. good luck!!!!!! and happy new year to you!
Joni

Wow, I love the paisley you received. A treasure! I used to slipcover all the time, now reupholster since my lady seamstress passed. She would come over, measure take notes and then come back with a slipcover that fit like a glove!!

I thought of you when I was going through all the Dan pictures :)

Thank goodness the slipcover will always and forever be Choice. As your previous posts indicate- do what works for you. Everything gets a return and a repose. I see the peacock blue is still a favourite-I am working it in to an existing living room for a client (see my Sophies Choice post) The Dunham fabric is lovely. GT

I absolutely love your project idea, Courtney, and can't wait to see how it turns out. That Dunham fabric is gorgeous! Happy New Year!

so gorgeous! i'm completely obsessed with chairs of all sorts, so this post really makes my day! hope you had a lovely holiday!

Happy to make your day!

This post is very apropos - I was just thinking about slipcovers today. I know that Joni is a huge fan, but I must admit that I like a more tailored look. However, this post clearly defines that the beauty is in the details, and the variety in a beautiful slipcover is great - they are not all wrinkly and loose.

I picked one of your posts for my 2009 roundup! Have a wonderful New Year!

That's a great point. Some are quite sleek and really tailored.

Okay, I'm flattered to be included and curious...hopping over

I finally know what to do with my "fussy" chair...what a great idea! So important to get perfect fit but I'm going to have so much fun finding the right fabric for my current lack-luster piece. Thank you! Can't wait to see how your beauty turns out. Happy New Year!

Lovely post....The border of the fabric on the arms will be fabu!
Thanks for sharing