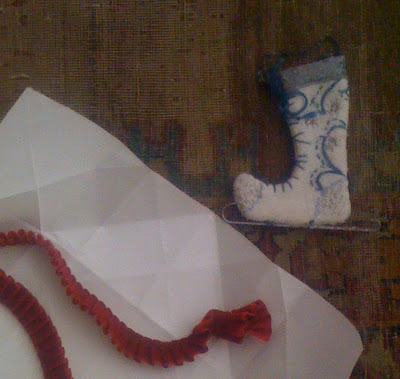 When I was in fifth grade we didn't have Twitter, we had elaborately folded notes. So I thought it would be a cinch to recreate the star-like paper valentines featured in Jane Campion's production scrapbook. 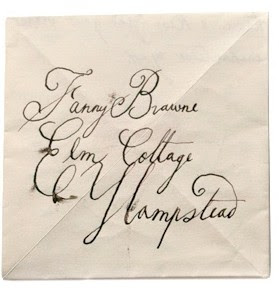 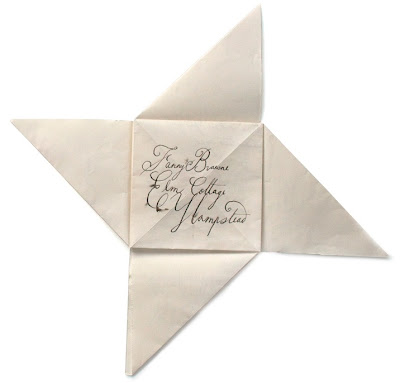 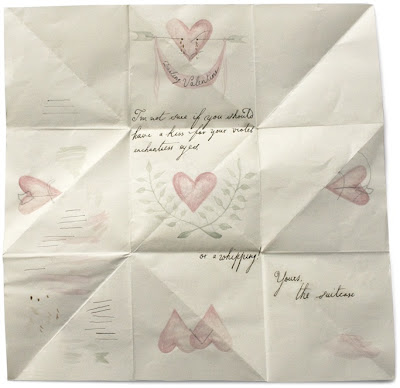 As mentioned in an earlier post, my plan was to copy the shape, not the heart decorations, and use the folded notes as holiday gift tags. Originally I liked the idea that the paper stars (or pinwheels) cost almost nothing and aren't wasteful, but do require a certain amount of effort. For tutorials, I turned here, here, and here. 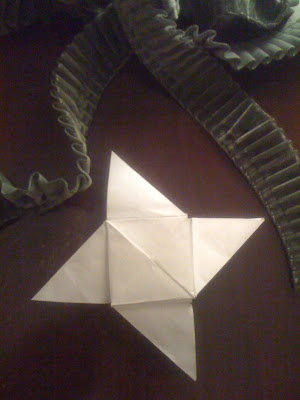 Did I say effort? On the first go round, these can be brain teasers, hence the less than stellar results above. No wonder these are called "puzzle purses." Without the Regency-era handwriting, it remains to be seen if these intricately folded pinwheels will be as interesting on packages as I had initially hoped. (I may rubber stamp pretty initials.) 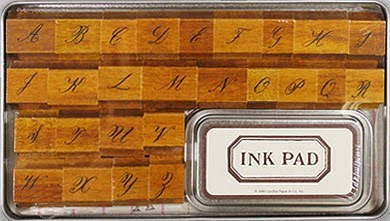 At least now if I'm ever asked about paper folding history, I know where to find the mother lode of information. But if you are searching for an inventive way to attach a romantic or mysterious note to a gift, this could be a fun option.

First off, I had a good chuckle just reading the title of this post. Then I thought about actually passing notes in fifth grade on my dad's yellow sticky notepads, which btw sounds like so much fun. I love all the paper arts, and you always round it up with such a great post. Thanks Courtney! ps. many timeouts were had by this note passer.

I should send you my daughter's paper folding fortune telling system. So fun!
pve

This post makes me want to take out my calligraphy pens and write something. I took a class last year, but the location of the class and the structure of spending three hours doing calligraphy did not seem to mesh well with the spontaneous and free flowing nature of the writing. Perhaps I should just do some calligraphy on my own at home.

Those fortune things are what I remember making :) At the time it seemed like so much fun. Laura, happy to hear you remember notes too!

I can picture you being a great calligrapher. When I was 15 I took lessons and there was so much practice involved. Except for forming the inside of the lowercase letter "a" I've forgotten it all!

Better than twitter by far, and even with the learning curve, I bet more fun.

Courtney, these are very interesting, and BTW I think your star looks just fine!

I just turned 60, and we had these, too. Just read an article in today's paper that the demise of cursive writing may lead to less brain stimulation. Of course, I think that Twitter is a perfect example of that in action. You are having great fun with the movie. I think you need to develop a fortune star for divining the style futures of 2010. Happy folding.

I too loved the post and remembered my numerous folidng systems. These look great and I love the stamps. I cannot believe how much of an art writing used to be (and not just sending letters, but the actual formation of words)... perhaps a calligraphy class is in my future?

These are gorgeous. I never learned to fold notes like this, but I do remember making lacy snowflakes this way...

I teach traditional Greek Folk Dancing to 11-15 year olds, and they are constantly making me silly notes and folding them in all sorts or crazy ways. I LOVE IT!

Shape looks good. How about a light puff of gold spray paint? Not enough paint to make a solid coat, instead just like a diffused puff. Also might be cool on brown craft paper. Ohhhhh. Plus, don't sure if you remember this but, Courtney, I DID have a bumper sticker printed that says "Bring Back Subtly"...its currently on the blog. I surely did. Shameless.
;-)

Oh my gosh..! I remember the folded notes we all used to do... always on notebook paper... I am sure your holiday gift tags are going to be a hit! I think it would be fun to sprinkle a tiny bit of glitter in the middle of each one... :)

This post brings back such wonderful memories of folding notes!! I used to love to do that - but I am sure I have forgotten how.
xx-Gina

Gosh, I forgot all about those folded notes. I love your efforts and think your gift recipients will appreciate them as well!

Oh gosh...you are a girl after my own heart! I am already collecting little bits and bobs, and hoarding boxes...and if truth be told, I am already dreaming of those holiday wrapping sessions! The the Jane Campion link! Eeeee!