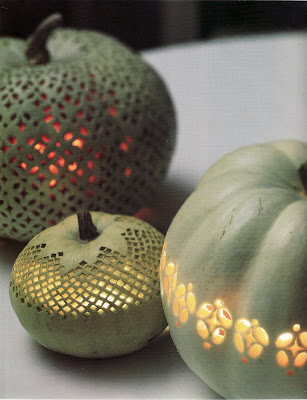 Every year I fantasize about flanking my steps with pumpkins or gourds that have been carved to resemble old pierced English creamware. (You probably don't need me to tell you that the intricate examples above are Martha's.) For a Southern gathering of design enthusiasts, something ceramics-inspired would be timely this year because of the Birmingham Museum of Art's Buten acquisition, the largest assemblage of Wedgwood ceramics outside of England. More importantly, though, pierced pumpkins illuminated by candlelight look magical on crisp October nights. 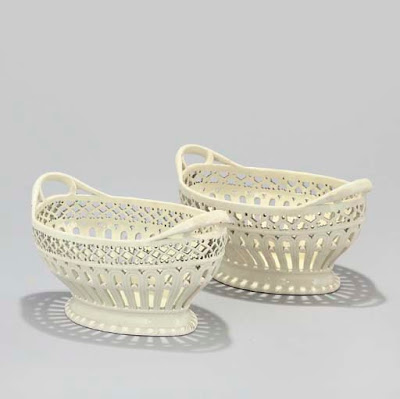 So far all I've got going is this. 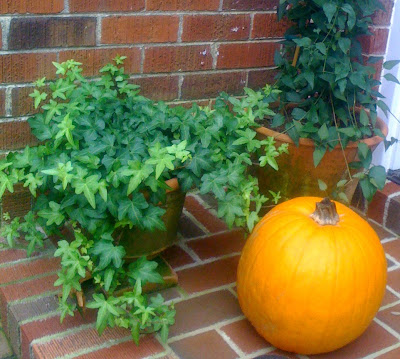 But I know many of you are doing creative projects: putting the final touches on those costumes, battling royal icing and contributing to the neighborhood Halloween festival, or just running around town looking for the last remaining black tapers. 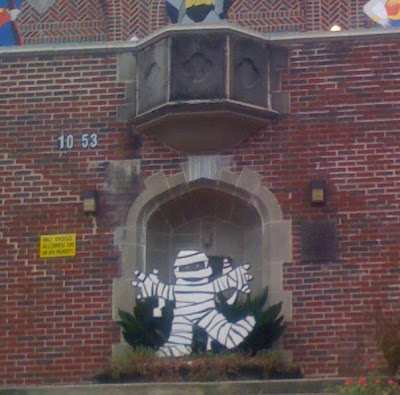 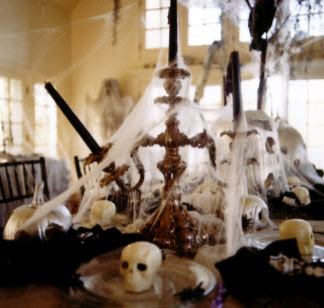 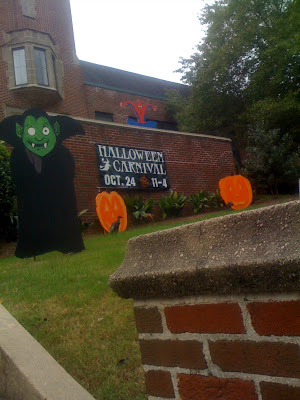 If you want a relaxing soundtrack for the last minute crafting or errand running, Practical Magic is finally available through iTunes. 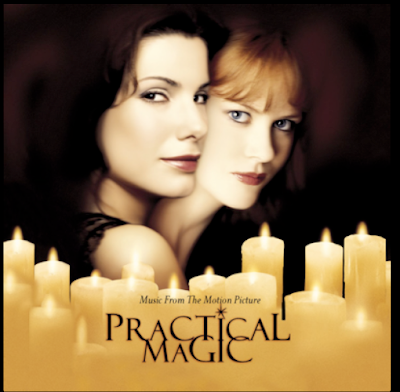 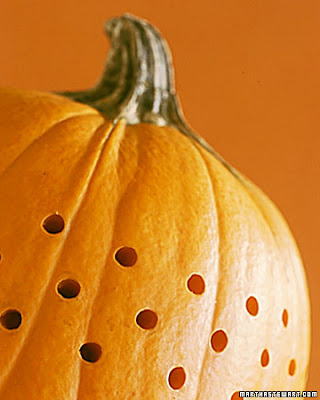 This other Martha project with simple drilled holes looks like a possibility. Have any of you tried it?

Update: 10.26.09
8 p.m. Inspired by the Peachtree Heights East Duck Pond pumpkin float referenced in the comments to this post. 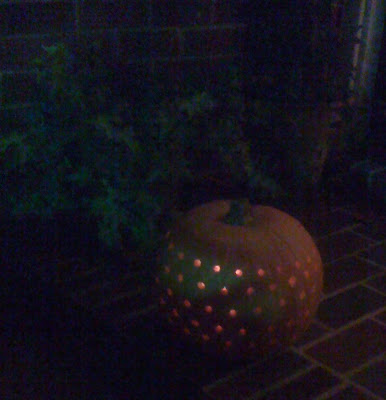 One down. Clearly a large grouping is needed for impact. We'll see what kind of damage squirrels do overnight.
FYI: The Birmingham Museum of Art officially opens ts new Wedgwood gallery on November 19, 2009. 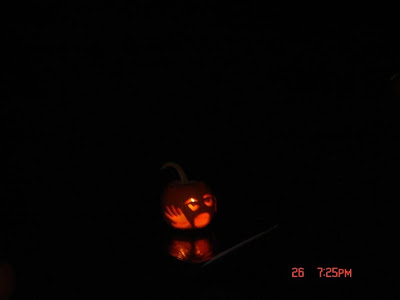 Above is a shot from the Duck Pond Float spearheaded by Charlotte Margolin nearly a decade ago after she learned about Central Park's pumpkin float. Her husband and another neighbor made the original float for the Peachtree Heights East neighborhood. Peachtree Heights East's duck pond is one of the most picturesque sites in Atlanta, so on the night when local kids float their pumpkins on the water, the setting becomes even more wonderful.

We've got a few pumpkins outside and some little things stuck to the door my three year old made. That pumpkin with the holes drilled in it would look neat lit up but highly unlikely I will do it :) The group singing on Practical Magic sounds right about my speed.

Thanks Laura! Appreciate you noticing. And I owe thanks to Anne for her work.

Decorations made by three year olds are the best in the end. One day I just really want to try drilling :)

I am all about that pumpkin with holes drilled in it, my husband would tackle that with great enthusiasm. Thanks for the pumpkin heads up!

Tina, a power tool enthusiast would be a big help!

"It is SO easy to use a drill on a pumpkin - you can have the whole thing done in about three minutes! Use a large gauge, like a 3/4" drill bit and just go kinda slow. I wedge it between my legs (while sitting!) and just drill away.
It is really magical and always amazes everybody
Tonight in my adorable neighborhood in Atlanta was our annual Pumpkin Float on the duckpond and there were so many cool examples of clever carving and drilled gourds
Happy spooky October fun projects
Does it get any better than this time of year and the smell of leaves and candle lit pumpkins?!"

and another reader wrote:

"...at the Duck Pond tonight, Lakeview just off Peachtree, Garden Hills area, all the children, just at dark ,shoved their wonderful carved lighted pumpkins off into the water! What a beautiful sight..."

I could probably do this with a drill! Such talent!

After hearing about Jill's success with a drill and consulting with my dad, I think a drilled pumpkin may be in the plans this week!

Can't wait to see your results. No matter what we do we have a horrible time with the squirrels. Once we cut into the pumpkins they turn into lunch.

I drilled holes in our pumpkin years ago...the neighbour hood kids called me Martha all night while handing out candy...it looked fab with the light shining out (used a string of christmas lights inside) really easy and effective.

Drilling sounds like a perfect way to carve pumpkins. I will put on my Practical Magic album and enjoy.

Great post! I have the Practical Magic on my computer, and will have to listen to it this week.

I've done the drilling and it looks terrific. I second the suggestion of using little lights, and if you want to make it really funky, you can stick the lights through the holes you've drilled.

I think you should def. try to drill your pumpkin. Personally, I try to find every excuse I can to use my drill! Love your new Style Court header, by the way.

Again, the connection is splendid! A long time ago, when I worked in the Education and Public Programs Department of the Birmingham Museum of Art, I loved to visit the the Wedgewood collection. It is so fabulous and so thrilling to see just how many beautiful patterns there have been over the years.

My front step looks about like yours. Great intentions, just not enough time! Martha always puts the rest of us to shame!

My pumpkin(s) look just like yours--uncarved. I may try the Martha drillbit project this year, so we shall see how that turns out.

Millie, SA, and Shannon -- thanks all around!

Okay I am super impressed. You are quite crafty. Maybe leave a snickers next to the pumpkin and the squirrel will opt for that instead.

A drilling I will go! This is so great....Well first of all your post, but how about all the great input from your talented readers!!
I got all white pumpkings this year & tied big black grosgrain bows around the stems. That's about as creative as I could get but now I'm getting the drill all reved up!
OOOOOOOO! Lisa

Have fun Lisa! White pumpkins sound lovely. And, yes, my talented readers are great. Thanks for stopping by.