In 2008 I asked several designers and tastemakers to talk about styles of furniture that make great investments. At the time, we didn't know the stock market would take such a dive toward the end of the year or how many jobs would be lost in 2009. So the original question, "Which pieces do you think you could be content with and not feel the itch to replace for years and years?" has become more timely.

Some of the most favored pieces included camelback sofas, gateleg tables, 18th-century-style chairs, Bennison linen (or similar fabric), classic cabinets and/or secretaries. Well, over the weekend I was looking at production designer Sarah Greenwood's work on 2005's Pride and Prejudice, and I spotted those very same pieces in the Bennet family's house, Longbourn (Groombridge Place was used for filming).

Based on a few of Focus Feature's published production notes for P & P, it sounds like Greenwood's assignment was to visually convey that the Bennet daughters are far less affluent and financially secure than Mr. Darcy or the Bingleys, even though, to a modern audience, the Bennets live rather comfortably. Hence a pair of camelback sofas are covered in unmatched, imperfectly fitting slipcovers and the pillows on both are nicely smushed. In general the Bennet interiors lean toward the rustic (albeit opulent rustic) with that tattered-around-the-edges feel. 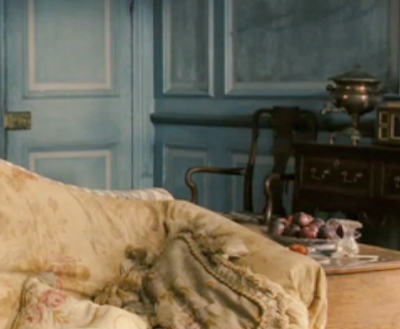 Mr. Bingley's Netherfield is furnished with neoclassical, Adam-esque pieces -- styles that were the height of fashion at the time -- while Longbourn is filled with earlier 18th-century styles: Queen Anne, Early Georgian. Instead of delicate painted furniture, the Bennets have stained-wood chairs and tables with cabriole legs, and heavier cabinets (at least one seen on screen appears Japanned).

There is one element that I never thought much about when I first saw the movie: the patchwork linens on Lizzy Bennet's bed. In the November House Beautiful, Jennifer Boles, aka The Peak of Chic, writes about the return of patchwork, so this time I looked at the mix of luxurious crewelwork bed hangings and humble patched quilt from a fresh perspective. Even if you're not a big Jane Austen fan, take a look at the film; the director and designer really made good use of Groombridge Place. Apartment Therapy has also covered the sets, and Linda Merrill has discussed the BBC version.

All images are screen grabs from Focus Feature's 2005 film, Pride and Prejudice. Click to see details.
Posted by Style Court at 2:46 PM

One of my favorite movies with beautiful sets. I will always love camelback sofas and anything Bennison or similar.

There's something about those sofas placed back to back and those beautiful blue walls. Happy to know you like it too Laura!

THis is so funny! I was just watching this movie last weekend where it played twice back to back. I ended up watching it twice! Such a great movie...and the interiors definitely got my full attention!

Katie, maybe we have ESP. I definitely thought about your advice to invest in a great secretary or cabinet and mix it with a slipcovered IKEA sofa!

I love the set design on that movie. It makes it difficult to watch the earlier versions where everything looks so clean and sterile.

Mom on the Run -- Interesting. I'll have to think about that next time.

Very interesting post. I wasn't as enamored with the recent P&P movie as I was with the BBC adaptation (but that may be more attributable Colin Firth). Will have to watch again and pay better attention to the sets. But my main reaction is how could anyone NOT be a big Jane Austen fan! Hope you're well--

Karen -- Hope you are well too.

Many Austen fans definitely seem to favor the BBC adaptation. At least setting aside the issue of sets and focusing on the story.

I'll be curious to see if others weigh in on the comparison.

I appreciate both for what each have to offer and also have both versions. I often freeze frame to study decor, clothing and faces, equally the same. Wonderful post, thank you so much for it.

TSL -- thanks for stopping by and letting us know. You must be a big fan of P & P to own both!

Lovely post. I agree with the comments above about the furniture I think the slight tatteredness is much more true to the way their lives would have been. I also think the use of paint is very interesting, it is a kind of paint wash or glaze so it looks a bit like plaster and the fact that they have painted the doors, wooden panels, window frames and walls all the same colour and just picked out some of the panel outline looks very 'of its era'. A bit more interesting than what we do with the wall \ door frame contrast everyone does now!

Jane, the paint really does create a mood, doesn't it?

I love the "hand-me-down" quality, although granted those are exquisite hand-me-downs. I'm thinking of renting the DVD for more info on the production, like the use of animals. The iTunes rental had none of the extra features so I missed out on that.

Courtney — I remember noticing all the domestic details in this movie and thought they were almost like characters themselves. As a fiber fanatic, I paid particular attention to the bed linens etc. If you have not seen it, be sure to get a copy of "The Draughtsman's Contract" to see the same house in a very different light. I have a very old WoI article about the house as well. (The Colin Firth P&P is my least favorite version and this one was my favorite for the Bennet's house).

Linda! You always have great film tips. Okay, next up: Draughtsman's Daughter. Thanks!

Yes...and I love the teal color that travels from your post yesterday to today...from c. 2009 back to Regency. It's such a defining color to a certain historical time period.Has anyone ever used color chips to produce a time line of design over the last 200-300 yrs? Thanks for the beautiful images, both posts. Trish

My Grandma Elsie, she adored the color "robin's egg blue" and I remember her home, that color was on the walls, and I must say I remember that more than the furniture, my other Grandma Lizzie, she loved green and in her kitchen - a wonderful pale shade of green greeted me. I guess I remember color and that is one element that I think of. This movie too, that blue color is so wonderful. For me it is all about the color.
Well the furniture is great too-
pve

Classic pieces just never go out of style! A great movie as well!

Great blog entry - I've always loved the sets from this movie. The chinoiserie wallpaper in the room Jane stayed in at Netherfield is to die for!

Oh my goodness, I'm embarassed to say how many times I've stopped and started this on the DVR to examine the sets. There is a damask covered folding screen in Netherfield that would be so perfect if I could age it a little. My favorite room in the BBC version is the father's study...there is a chest in there...chinoiserie if I recall...

This is my FAVORITE type of post. I can watch these Jane Austen adaptations a zillion times over and never tire of the visuals. I will keep this post in mind and the details you have discovered next time I watch this particular movie. Thanks!