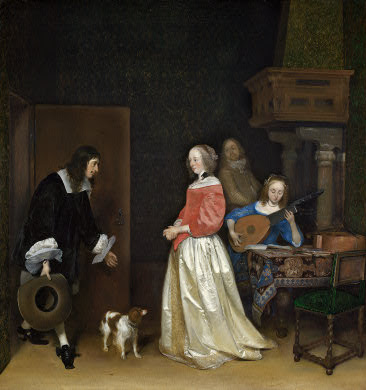 [The Suitor's Visit, Gerard ter Borch the Younger, circa 1658, via the National Gallery of Art]

The other day I mentioned a pair of late-17th-century open armchairs with barley twist arms and legs and spring-green leather upholstery available at Colefax & Fowler Antiques online. The brightness of the upholstery was a little unexpected, like an orange silk lining inside a brown tweed blazer. Darker tooled leathers or jewel toned velvets seem to be more commonly found on chairs of this period when they pop up in antique shops today. 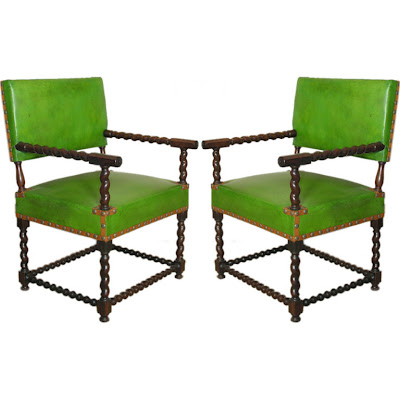 You know, something closer to the wine shade seen below in Gerard ter Borch's A Young Woman at Her Toilet with a Maid, circa 1650–51, via The Met. 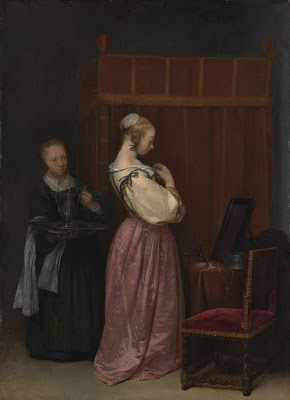 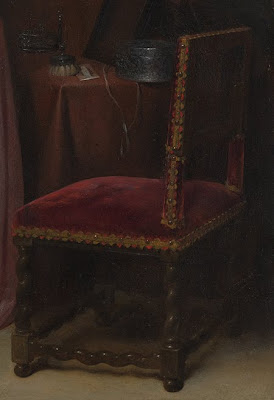 So later, when I stumbled upon another barley twist chair with vibrant green upholstery in a 17th-century painting by Gerard ter Borch the Younger, I thought I should post it. Shown at the top is The Suitor's Visit, circa 1658, via the National Gallery of Art. I would definitely describe this green as being in the emerald range, as opposed to the apple-greens more closely associated with the 18th century, but still it's interesting to see the contrast in these old paintings of somber brown wood with luminously colored textiles.

I love these! The bright, peppy colors are rejuvenating. I have 4 of these torsadés around my dining table. I used a red Lelievre velvet called Ronsard as upholstry which has big squares of velvet that seem to be surrounded by galons -like in the canopy you pictured. There's something sturdy and comforting in this style.