Girls (and Boys) in the Windows 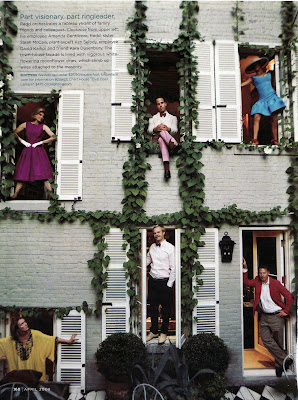 Former advertising executive Chris Cox of Easy & Elegant Life has a good eye. Earlier today he observed that a photograph I posted, Paul Costello's shot of Miles Redd and friends simultaneously popping out of the windows in the designer's house to form a graphic composition (domino, April 2008) is visually reminiscent of Chanel's ÉGOÏSTE spots done nearly two decades before. 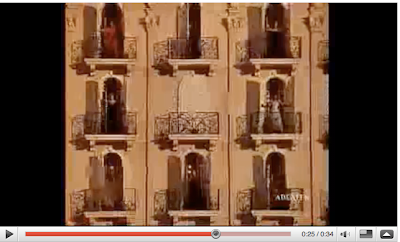 I found the old commercial here, on YouTube. According to Chanel's site, the ÉGOÏSTE spot was directed by Jean-Paul Goude and was awarded the Lion d'Or at the 37th Cannes International Advertising Festival in 1990.

In terms of emotion, the scene captured at Redd's house is decidedly lighter while the television spot seems filled with torment. But again, graphically the connection is clear. I've been racking my brain trying to remember if there is also a scene from an earlier film or a maybe even a painting that could have influenced the 2008 magazine shot. Thoughts? 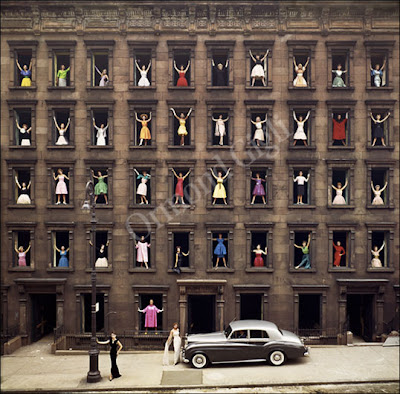 Lovely reader Amy just brought to my attention "Girls in the Windows," the signature picture of Ormand Gigli shot in 1960 while a construction crew dismantled a row of brownstones on East 58th Street in NYC. With the colorful clothes juxtaposed against the neutral building, this shot definitely feels like a precursor to Costello's picture. Click here for the story of how Gigli got his shot, and if someone else already blogged about this connection in 2008 when domino's April issue was released, but I've overlooked it, please let me know.
Posted by Style Court at 7:20 PM

I wish I had thoughts for you re: the inspiration for that Domino shot. I does remind me of a scene from a movie but have no idea which one. I had never seen the Chanel commercial before. It was great fun as they are always incredibly entertaining. Great post~

DT -- I'm so glad Chris brought the commercial to my attention! There really are so many amazing Chanel spots. Thanks for trying to remember a possible movie.

How great that you thought to pull that old Chanel ad- I remember that like it was yesterday! Love those big shoulders in the shutters! super post.

Laura, I think I read that all the dresses were Lagerfeld. But don't quote me on that. You've got me curious to watch it again.

Hmm...back to YouTube to see if Laugh In is on there.

Funny enough Mrs. Blandings, Laugh In was the first thing that came to my mind.... lol....Ruth Buzzie (sorry can't remember the spelling), Goldie Hawn and the rest of the gang !

HI,
The Domino shot seems slightly reminiscent of Ormond Gigli's famous 1960 photograph, Girls in the Windows....that photograph, with all of those chic women in the windows of that New York brownstone, is an absolute favorite of mine. Fabulous!
Amy

Amy, thanks! I'll try to track that down.

I didn't go back through his archives but I believe if memory serves(risky at soon to be 50) the incomparable Paul Pincus did something on this a few months ago. That being said,it just shows that great minds think alike, nothing new under the sun & history repeats itself. GT

I do think Paul and Leah of "More Ways to Waste Time" have written about Gigli's work. I'll try to see if Paul did a Costello/Gigli connection. Thanks!

oh everything has been done before!! it takes a classic mind to reivent the classics baby!! miles is on it!! a true original spirit!! props to miles for the unconventional photo!! thank god for talent.

How fun and funny! Very cool, yes Laugh In, a predecessor in sorts of Sat Night Live.

Costello's picture is one of my all-time domino faves. If it is a riff on either of these past creations, it's just wonderful. So inspired. And yes, Miles style is a huge part of it!

The Gigli shot is breathtaking. Wonderful post! Thank you.

The Gigli shot is breathtaking! Wonderful post. Thank you.

Beautiful connection. I loved seeing the Egoiste commercial in my younger years. At the time, I thought it was absolutely bizarre.

I thought of Laugh In too! But this is a lot cooler!