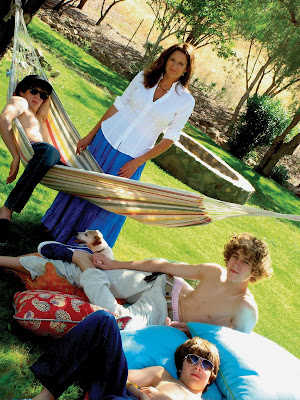 In the publishing world, books about houses often fall in one of two categories: Fantasy or "aspirational," meaning the featured homes are unattainable for most readers but nonetheless satisfying for daydreaming, and "how to" guides that provide readers concrete steps to use in decorating their own rooms. Kathryn Ireland's new book, Creating a Home, appeals to me because it combines fantasy and reality. 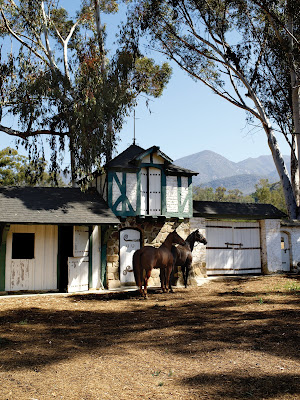 [Photograph by Thibault Jeanson for Vogue Living from “Creating A Home” by Kathryn M. Ireland. Reprinted with permission of Gibbs Smith.]

Not many of us have the opportunity to restore a 1920s Wallace Neff–designed California dairy barn and stables (in fact, Ireland writes that quite a few architecture-obsessed actors with deeper pockets than hers had walked away from the estate sensing it was a money pit). But I think architecture buffs of all kinds will find the project inspiring. The Libbey Ranch, as the estate is known, has had several lives; Neff originally designed a collection of buildings to house animals, and then in the 30s Austen Pierpont was brought in by a new owner to re-imagine the barn and outbuildings as a residential holiday compound. So, the place has always had a certain whimsy.

When Ireland purchased it, her hope was to rescue it. Whether it remained in her hands or not (actress Reese Witherspoon later bought the estate from Ireland), the idea was to preserve the attributes and the quirks -- original adobe brick, amazing iron work and kaleidoscopic Mexican Talavera tiles, irregular wood floors and unorthodox floorplans, native river rock, half-timbering. (By the way, the book is filled with detailed images of the building materials as well as a smattering of old archive photos that could be helpful to anyone restoring a Mock Tudor or Spanish Colonial house, regardless of size.) 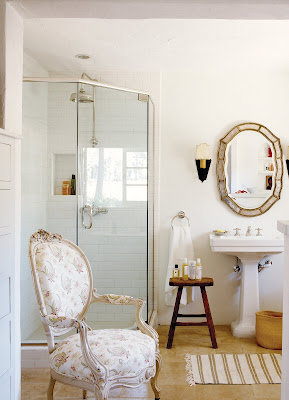 [Photograph by Victoria Pearson for House Beautiful from “Creating A Home” by Kathryn M. Ireland. Reprinted with permission of Gibbs Smith.]

Ireland is also candid about the financial pitfalls of any restoration, and she talks about striking the balance between modern comfort and historic authenticity. 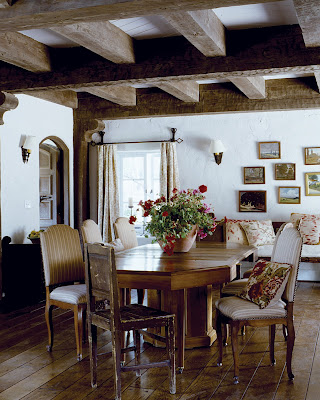 [Photograph by Miguel Flores-Vianna from “Creating A Home” by Kathryn M. Ireland. Reprinted with permission of Gibbs Smith.] 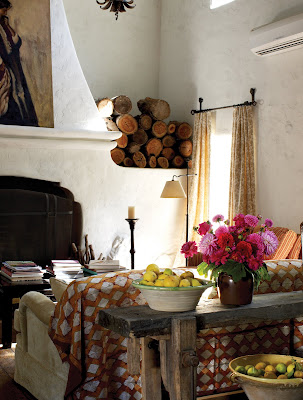 [Photograph by Miguel Flores-Vianna from “Creating A Home” by Kathryn M. Ireland. Reprinted with permission of Gibbs Smith.]

For one thing, the decoration doesn't upstage the occupants. Ireland says her goal was to make the large living room equally inviting for a crowd or for one person in need of a nap. And although the place has a wonderful rustic vibe, it doesn't feel like a movie set version of a ranch. It's not theatrical. 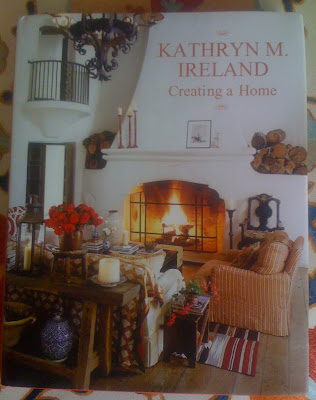 The art ranges from old to contemporary; from flea market finds to works by India Jane Birley (a childhood friend and granddaughter of portrait painter Sir Oswald Birley) and by Oberto Gigli. All of it seems to be there because Ireland loves it, not for its pedigree. Another aspect that might contribute to the home's welcoming quality is the balance between masculine and feminine elements. The sturdy beams and abundance of old-growth wood are nice foils for Ireland's highly decoritive fabrics.

While I imagine that the architectural restoration cost a small fortune, the furnishings fly in the face of trendy, living-above-your-means decor. All of the pieces are the sort that never really go out of style. There is something refreshingly frugal about that. 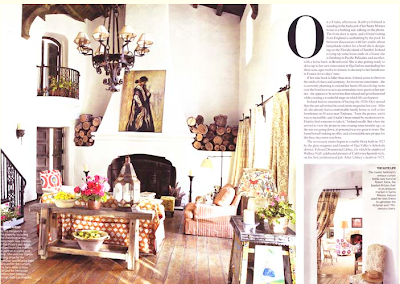 Just to refresh your memory of the American Vogue Living spread from 2007 that piqued everyone's interest. Photography by Thibault Jeanson. 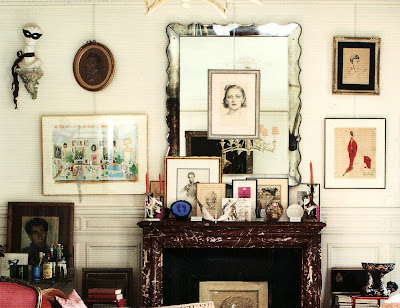 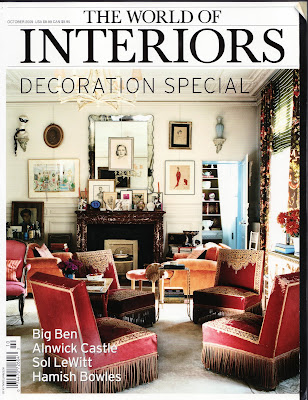 Ireland and Vogue's Editor at Large, Hamish Bowles, have an affinity for some of the same artists including Konstantin Kakanias and Sir Oswald Birley. Bowles' apartment is on the cover of World of Interiors, October 2009; to the right of his fireplace hangs Kakanias' "Mrs. Tependris at Home." Photography by Francois Halard. Click to enlarge.
Posted by Style Court at 9:17 AM

I love her style, I wish we had a Book Thing like Meg. I just boxed up about 50 books to go down to the garage. Just in editing out my bookshelves!

Wow Karena! You really are editing.

I'd love to see some new projects from Ms. Ireland.
this project is a big favorite across the blogsphere.

Thanks for the post. We love her house!!! In fact, we're going to buy her book!

P.S. Dandy, did you check out her website? We did and saw quite a few projects, including those featured in her "press" section.

thank you all for being so gracious and interested in the book. I fell in love, and the place needed to be loved. what more can I say. Please come to any of the book signings, This THursday At The PDC in Los Angeles. You will all get a signed book if you have read this.