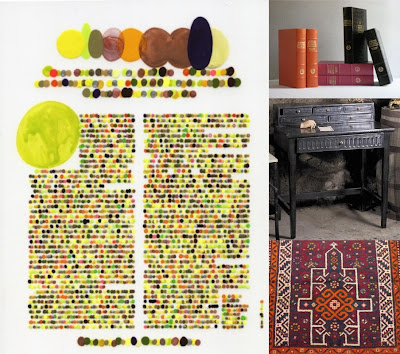 Remember Warja Honegger-Lavater? She's the Swiss-born illustrator who worked for the magazine Jeunesse in the 1940s and 50s and later created a series of artist's books using spots of color as substitutes for words. When I first saw some works by the young contemporary artist Lauren DiCioccio, I thought of Honegger-Lavater. 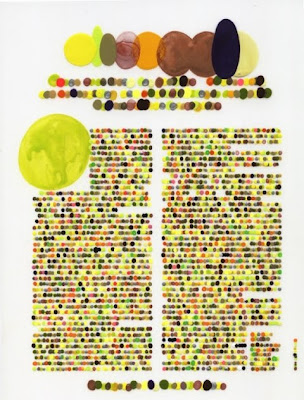 Describing her paintings as something akin to "a system of Braille for the color inclined," DiCioccio takes a printed article from Vogue, Vanity Fair, or other publication and reinterprets the letters and characters with dots of color. (Basically she assigns a color to each letter in the alphabet.)

Shown above is an example titled, Vogue JUL08.pg132 (what exactly are we breathing). Affordable prints of DiCioccio's work are available through 20 x 200. Since the artist is passionate about the tactile qualities of the printed page, these might be especially nice hanging in a home office. 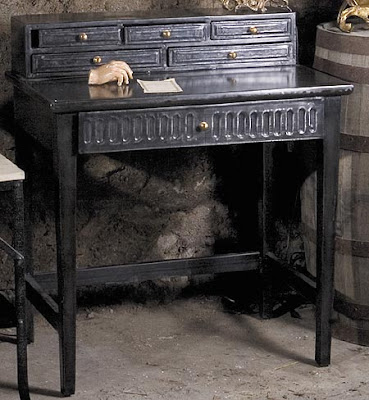 To take it a step further, Mothology's petite Foreign Correspondent's Desk in blackened steel would be perfect in a tight space like a landing or a large closet that has been converted to an office. 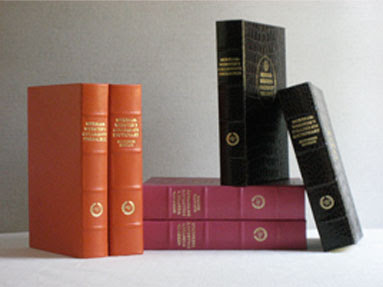 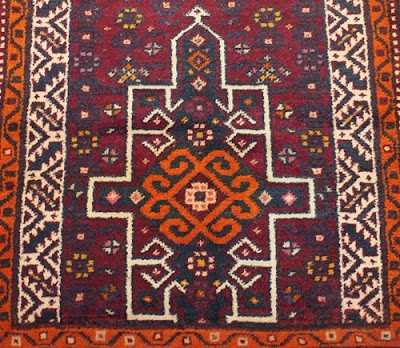 Those brilliantly colored leather-bound versions of Merriam-Webster's dictionary are still the best luxe accessory I've seen in a long time (available at And George) but any small hit of color would look great atop this desk. For example, that perennial favorite with the bold yellow spine -- National Geographic... 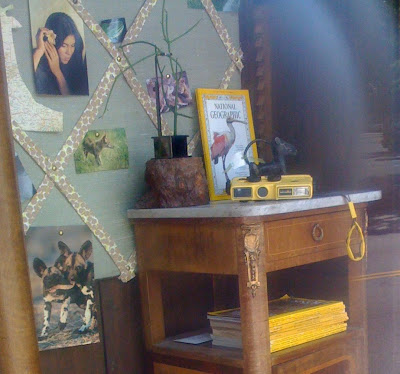 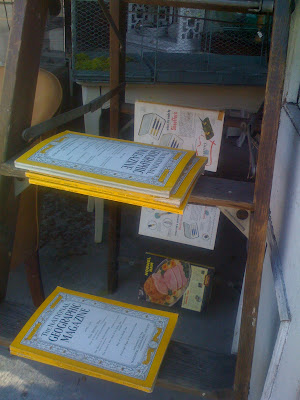 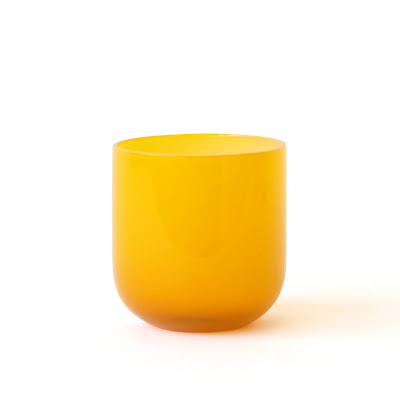 or a yellow tumbler used as a vase. (National Geographic collection spotted at Providence; $14 tumbler available at Pieces.) 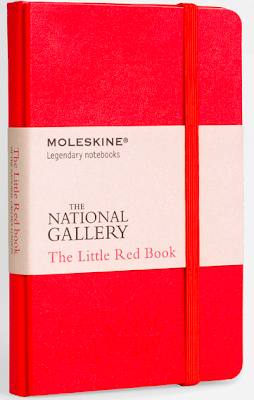 Or The Little Red Book of London's National Gallery, created in partnership with Moleskine. For fall, a small Turkish rug would also be cozy. The Herki shown above turned up at The Loaded Trunk. 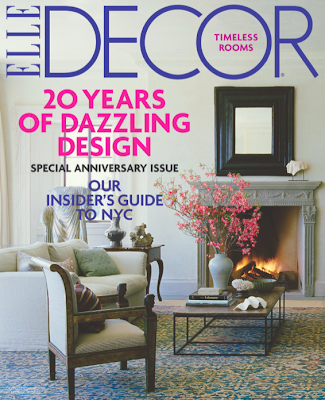 As I was finishing this post, my 20th anniversary issue of Elle Decor arrived. (Fans of Michael Smith and Anthropologie will love it.) Since everyone across the globe receives the magazine at different times, I won't jump the gun and share any of the featured houses, but I do want to mention one of the prettiest ads that happens to include a designer's work table. 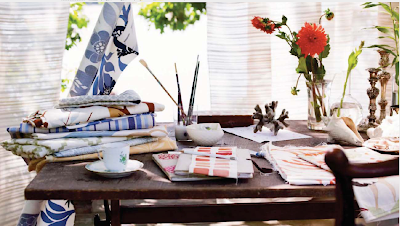 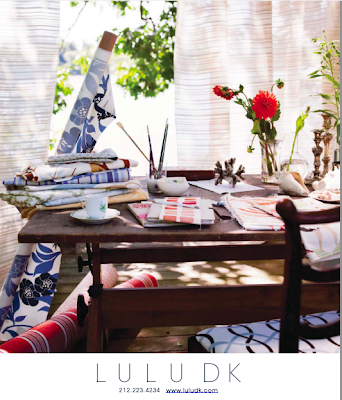 It's from Lulu DK and there's a natural softness to it that makes an interesting counterpoint to the graphic fabrics. Rather than use a sleek modernist teacup, it appears that the stylist opted for Herend's Chinese Bouquet, or something really similar. Candlesticks look antique, too, and the flowers are placed loosely in a glass. 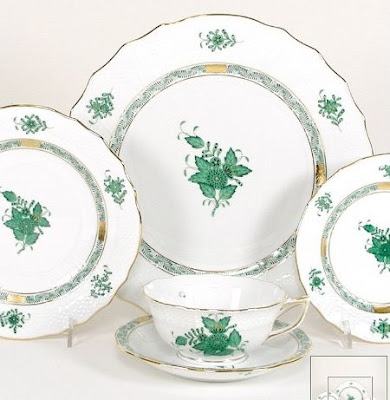 I am dying here..did not get my Elle Decor yet!!! and..WANT that yellow tumbler for my bedside table.. it almost could be the perfect votive holder!!!! what a glow it would give off in a powder room or entry hall!!

Happy end... of Labor Day!!and wishes for a great Week ahead!!!

Love that Lulu ad, anything with Chinese Bouquet gets me.

Thanks for the well wishes Ivy.

I think whoever styled the desk did such a great job -- not sure if it is based on a real work table of Lulu's, but it really works!

I wasn't familiar with that gorgeous interpretation of Little Red Riding Hood. What a happy discovery! Thanks for the intro... and the perfect correlation to Lauren's work.

Lauren's Vanity Fair and Vogue prints on 20x200 are super gorgeous and printed on a vellum that is evocative of the originals. (Yes, I am totally biased, but HONEST they are fab.)

We also included some of her originals, which are also quite affordable, in our Summer Reading show at Jen Bekman Gallery.

Lots of exciting things going on- I especially love the work of Lauren DiCioccio. Fascinating, especially since I am fascinated with Picasso right now (just posted another look at some things at the Nasher) I would actually love to have one of her codification pieces. Love the colors you are working with and the new Elle- can hardly wait, I have an email from amazon that JG's book is now on its way to me-What wonders await me in the post this week?! Do you have the Lulu book of her collages and paintings? that's a good one. G.

Yes, I love Lulu's book. In fact, when it was released I had the pleasure of speaking with her about it. Very inspiring to pour over.

I have been following you for a very long time...I just truly enjoy reading your content...always so interesting. I don't know why I feel weird about leaving a comment though. Maybe because I'm not so well versed when it comes to art..but that's exactly why I love stopping by. I'm hoping that one day I will be. Today my little voice kept telling me to finally let you know! :)

I'm so glad you let me know. It makes my day when a reader says they've found something interesting here! So, thank you. I truly appreciate it.

i love the juxtaposition of the romantic pattern of the china against the modern motifs of the lulu designs....good pic!

Now that I'm chomping at the bit to get my hands on that issue of Elle Decor... :)

The red Moleskine notebook is so beautiful. I love it!

That Mothology desk is perfection!!

Oh geez! I was wondering how she worked out there, I missed that it was an ad. Gorgeous either way :-)!