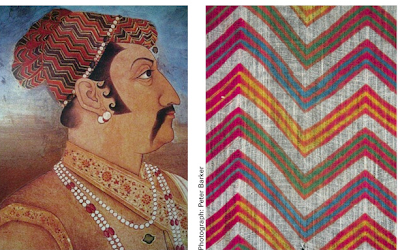 If you're enamoured by tie-dyed Indian textiles, be sure to pick up a copy of Hali, summer 2009. Jayne Graham writes about centuries-old lahariya turbans of Rajasthan. (Lahariya literally means "wavy," and the term is often used to describe a tie-dyed design in chevron stripes or zig-zags.) Graham explains that the chevron is an ancient geometric motif symbolizing water. It frequently appears in Indian architecture, ornament, and block-printed textiles. To produce the distinctive rainbow stripes of lahariya turbans, she says cloth was traditionally folded and rolled "on the diagonal into long ropes which were resist-bound and dyed successively in different colors."
It's an interesting, beautifully illustrated article.

Shown on the right:
Late 19th-early 20th century lahariya turban
Photo by Peter Barker
Posted by Style Court at 7:48 AM

I've always liked chevron prints, but had no idea what they represented! That is truly, truly interesting. Gorgeous colors, too.

We are tie-dying this summer but I doubt it will turn out as terrific as this.

Love the similarity in the two images, yet they are totally unrelated!
Thanks, Have a good weekend!
Leslie

Doing a bit of catching up! Your artist's posts are inspiring me to break out the paints. My girls have also gotten into the act and are "sharing" a canvas. (They won't let me see it until it's finished!) A wonderful series and fun to see all of the artists "in residence"!

So interesting. I always wondered what the name of that technique was called. I can always count on learning something new and helpful from you Courtney!

Everyone, glad you find this interesting! Thanks for stopping by,

Thanks for this post! I am postively in love with Indian prints and hope to make a trip soon to India.

glad you like the article & thanks for the link! lots more about textiles from all around the world in Hali Magazine!