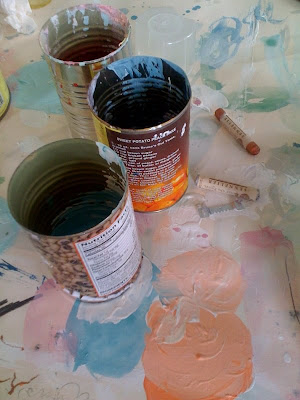 In case you are just landing here, welcome. We're taking a peek at artists' palettes. There's just something intriguing about all those colors bleeding together, and creative professionals ranging from graphic designers to wedding planners to interior designers tell me that inspiration often comes from unlikely sources, so, after watching The Art Newspaper's video, I thought it would be interesting to study palettes in use by some familiar faces. 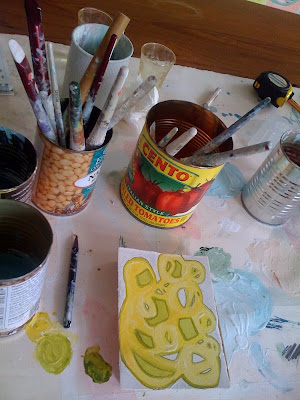 Louisiana native Amanda Talley has been a friend to this blog since she was first mentioned here in December 2008. Readers (and I) loved the fact that some of her smaller works were attainable. Like Zuzka, she typically doesn't use a traditional board as her palette.

She explains, "I use tin cans to mix my paints and to store brushes. I like them because they keep the colors separate. On big paintings I need large amounts of paint and the cans keep each color for each layer contained. Later, I can put cellophane over the cans with a rubber-band and save colors for other projects or touch-up. Also, I don't feel too bad about throwing them away when I'm done because they were given a second life after the black-eyed peas or whatnot had been consumed. While I'm in process, I also use them to keep my brushes wet. For small projects, I use paper as my palette, as shown in these pictures." 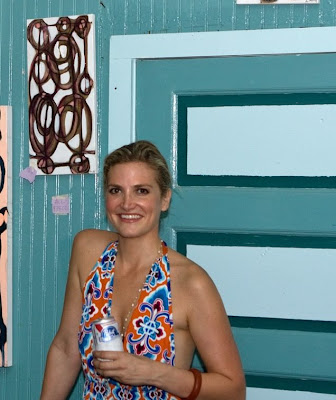 Here's a popular past post about Amanda's handmade gifts.
Posted by Style Court at 5:31 PM

I would LOVE to own one of Amanda Talley's paintings -- they are simply gorgeous and speak volumes to me! She is just amazing.
Thank you for this lovely post.
Michelle

My pleasure Pavlova. I think she's going to continue to offer small works occasionally on her new blog.

Fascinating! A few years ago, when I was really into art (my blog has kept me more into design and architecture over the past 2 years), I was a fanatic about researching all of my favorite artists' palettes. I could probably tell you most of the palettes of the impressionists!

Sounds like you have a bunch of fascinating info in your head and on file! Very cool. I love this subject, too.

I want that bathing suit! ADORABLE! Can u post where she got it from?

Hi Lacey, I think it was a maxi dress, definitely a dress regardless of length. I'll ask her :)

Amanda confirmed, it's a maxi dress by A Common Thread bought at UAL (united apparel liquidators) in New Orleans.

I hope the pattern of my dress distracted everyone from the fact that I am actually drinking a PBR!

While the pattern of the dress did not distract from the PBR, I was charmed by the way the can's color and pattern worked with the patterns of your dress. Lovely palettes everywhere. I enjoy your artwork.

Hi Amanda, nice PBR! I've never seen this page before and I'm excited to see how well you are doing, despite the PBR!
You know that make good beer now...
Murray