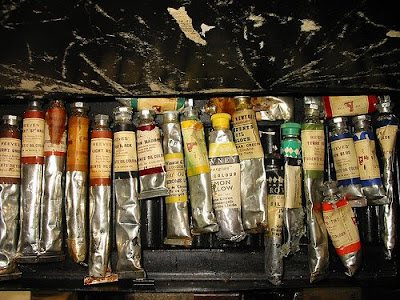 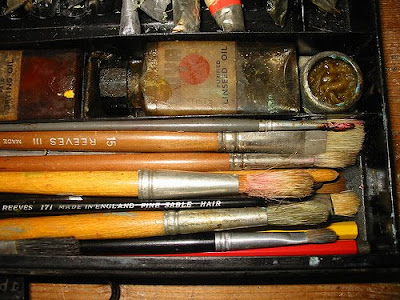 After looking at Tim Hussey's photographs of Jill Hooper's studio with all of its handsome, well-worn art supplies, I started daydreaming about antique and vintage tools that could be used today, either as originally intended or in an entirely new way. 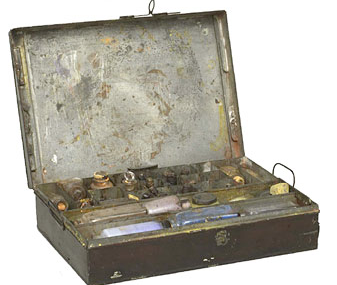 Paintboxes came to mind first. Old Reeves paintboxes ranging from vintage metal examples to one of the company's distinguished 18th-century boxes with original watercolors given by General George Washington to Nelly Custis* may turn up at Christies or on eBay. The detail images at the top show an eBay find, and pictured third is Turner's 19th-century box from the Tate archives. On its site, Winsor & Newton has other examples along with paint history.

Watercolors given by Washington to Nellie? Incredible. I'd be curious to know what they went for!

Great Post! How cool is that? I wish I was better organized with my art supplies. I do have a nifty little metal cart though! There is so much to learn about an artist by what is in their paintbox. Fascinating subject-matter as always.

Love these! Eye candy for the artist within.
It just makes you go out and create something!
L

Amanda -- I bet your cart is really interesting and brimming with cool supplies!

I seem to have art supplies everywhere! Two rolling bins, carrier totes, etc. I go between painting on my deck in nice weather, The Winged Scarab Art Space, and ARTichokes Open Studios!

I am a working artist - as an aside, I inherited a metal paintbox, complete with Winsor Newton paints, all from the 30's - my stepfather was British; he was captured in WWII in N. Africa - he escaped with a friend from an Italian prison camp - they hid out with an Italian family, the patriarch of which was an artist - he taught them the rudiments of art and to speak Italian, the idea being they could escape and if they encountered the enemy they could pass theirselves off as travelling landscape painters - and I have the paintbox! Over the years I have used the paints, they were preserve in a wonderful quality linseed oil base - I have a son who will inherit this art legacy - he is 44 and is on his way to fame and fortune in the art world - so I loved this post!

Suzanne -- what a fascinating story! Wonderful family history. Thanks for sharing.

I have read your blog for over a year but must say--- it is truly wonderful. There is no magazine out there I would rather read. You do a fantastic job. Is there a book in the works?

Oh my Kat, that's such a nice thing to say. I really appreciate it!