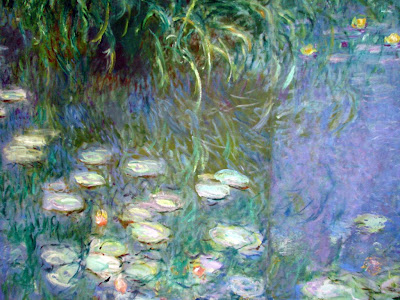 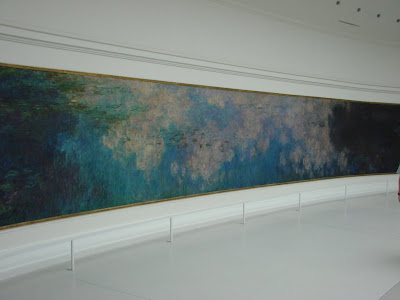 Yesterday I attended curator David Brenneman's intriguing Monet lecture at the High. Many art critics agree that the artist's Water Lilies, painted during his old age around 1920, later influenced mid-century Abstract Expressionists including Jackson Pollock. The debate lingers, though, over whether Water Lilies represents Monet's conscious move toward modernity or, instead, is the result of his failing eyesight and diminished physical coordination. So Dr. Brenneman spoke at length about that, but he also talked about floating. 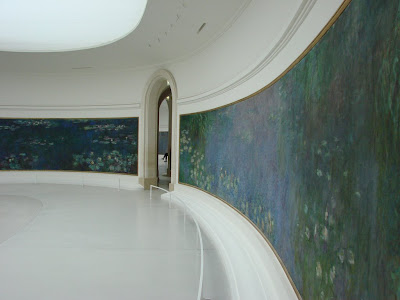 Monet was a great admirer of a style of Japanese woodblock prints known as Ukiyo-e or "floating world" pictures and he had a large collection of these at Giverny. David pointed out that if a viewer tries to position herself in one of the water lily paintings, there is no place to get a foothold. A sort of meditative floating is the only option. 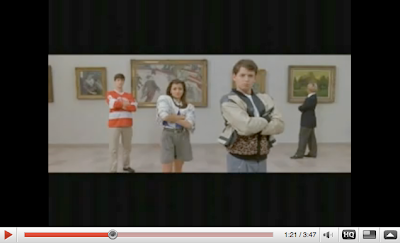 He referenced a quote from Asai Ryōi about the idea behind the Japanese pictures:

... Living only for the moment, turning our full attention to the pleasures of the moon, the snow, the cherry blossoms and the maple leaves; singing songs, drinking wine, diverting ourselves in just floating, floating; ... refusing to be disheartened, like a gourd floating along with the river current: this is what we call the floating world...

Taking time this summer for a "Ferris Bueller's Day Off," or just a lunch hour, sounds pretty good. MOMA has loaned the High four of Monet's most significant works and if you happen to be in Kansas City, The Nelson-Atkins owns a massive panel from one of the four water lily triptychs.

The Bueller clip is from YouTube.
Posted by Style Court at 3:22 PM

No foothold indeed. I was aborbed by everything I'm surprised I didnt awake from my Monet state soaked to the skin.

Thanks so much for sharing!

All the best always,
M

Glad you liked the post. David did a great job getting everyone to look at the paintings with fresh eyes.

All I can say is WOW...I was tidying my office Friday and I stopped for coffee over my book on Monet, I love his work very much. Thank you for sharing it with all of us

Lovely Comments, they had me get out my large Tome on Monet!

The first time my husband saw the Monet in person at the Nelson-Atkins he exclaimed, "This is my world without glasses." It was a kindergarten teacher who realized the tall, very smart, shy boy at the back of the glass couldn't read the blackboard! I've wondered what it must have been like "floating" those years before he finally saw trees had leaves! I never look at Monet's works without trying to see inside out. Lovely post.