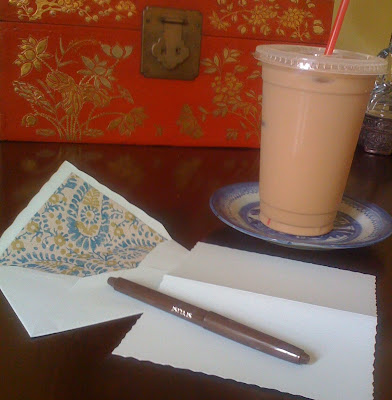 First, full disclosure: I'm not one who thinks email is necessarily so cold and dreadfully impersonal. It's really only offensive when people use it in a thoughtless way. That said, nothing beats an old fashioned letter sent via snail mail. And I don't just mean short obligatory notes -- thank-you notes and the ones described by the editors of Vogue's Book of Etiquette as "bread-and-butter" letters written after spending a night or more in someone's house. But longer, newsy letters that "come alive with feeling and invention."

According to the Vogue book, "a good, interesting letter is filled with the news, ideas, and opinions of the writer." 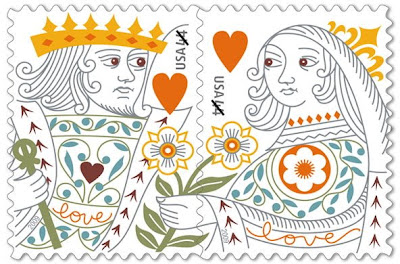 Today most people aren't used to receiving longer letters; some might even panic at the sight of three pages of script, assuming they are about to read bad news! On Paper Source's site, in one of the how-to video guides, there is a good tip for setting the tone. Include a long lost picture and start by saying something like, "Dear Uncle Lawson, I recently found this photo in a drawer. Remember that summer when..." 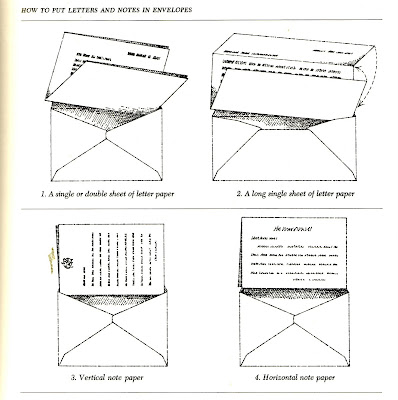 It might surprise you to learn that even in the 60s forward thinking Vogue editors said typed letters were indeed acceptable for informal letters to close friends. "If your handwritng is difficult to read or if you have a great deal to say, typing can be a saving grace." They did not, however, mean thank-you notes and they cautioned against attempting to make type face look like script by using swirly "affected" fonts. Everyone seems to agree that handwriting is always preferable. It's simply more personal. 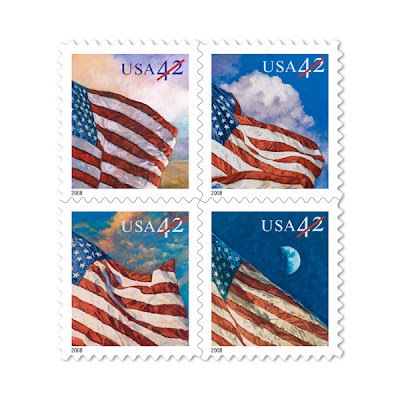 One of my uncles was very skilled at the art of social letter writing. It didn't matter if his letters were typed or handwritten -- the content was the star. Even as a young student at Hampden-Sydney, and later when he was in the Navy, he wrote meaningful letters to his parents and grandfather. The papers were saved, so now younger relatives who never had a chance to meet him can read them. When my sister and I were very young he sent us long, funny, fanciful letters filled with stories that incorporated my imaginary friend. 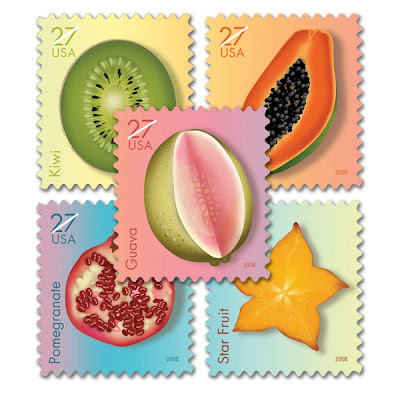 If you're going to the beach this summer, consider saving a few shells and maybe a pinch of sand to send with a letter in one of these pretty convenient mailers available at Paper Source. 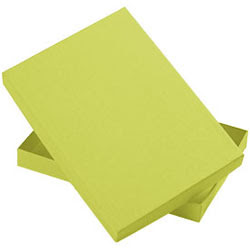 An elderly person who spends most of her time at home or a very small child would appreciate being remembered. I wouldn't send a 12-year old camper any pictures that might embarrass him, but mail is usually appreciated by older kids, too. With letter writing it is acceptable to treat yourself before you begin the challenge. So plan to indulge in your favorite cold summer drink while you put pen to paper. 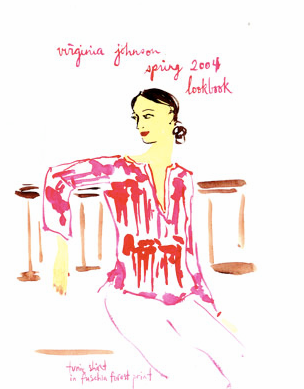 If letter writing doesn't light your fire today, check out this audio slide show about Virginia Johnson via Toronto Life. 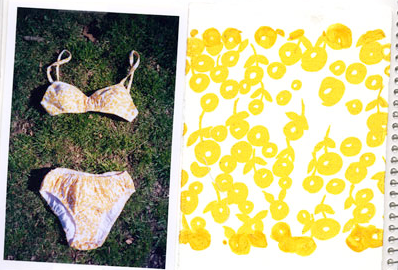 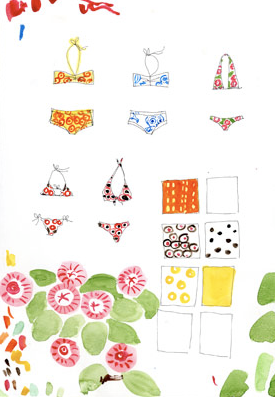 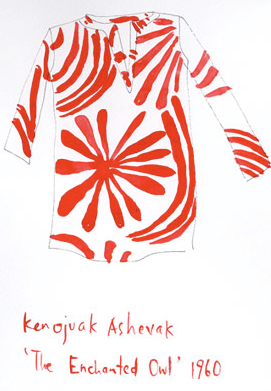 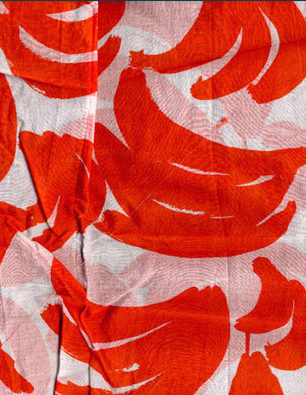 All of the stamps shown here are via the United States Postal Service. Inspired by 18th Century French playing cards, the "Love" stamp (King and Queen of Hearts) was designed by Derry Noyes and artist Jeanne Greco. The flag stamps were designed by Phil Jordan using paintings by Laura Stutzman. Designed by Ethel Kessler, the tropical fruit stamps incorporate work by illustrator Sergio Baradat. Images seven through eleven feature Virginia Johnson's work as seen over at Toronto Life.
Posted by Style Court at 1:22 AM

Inspiring! Who doen't enjoy a real letter as a welcome surprise among the bills and junk mail. Nice stamps and stationery are an additional pleasure not to be missed(loved the king /queen and the flag stamps), but the content is what counts! And I do love illustrated letters. In France, it was looked down on until very recently to send in a typed job application. Even businesses still feel they get to know you more through your handwriting!

I like to add a bit of sand in my Summer notes or a pressed leaf or blossom.

Letter writing shouldn't be a dying art. Thank you for the encouragement to put pen to paper. There is nothing better than receiving a newsy letter reflecting the authors personality. ( of course you have to write one to have one in return!)

All wonderful ideas. Maybe letters are more special now that they are not so ordinary; I know I keep nearly all that I receive. Adore the king and queen stamp!

Courtney- perhaps if more people wrote notes, Mrs. Strong would have stayed in business! I couldn't agree more with you- and Vogue!

I send cards to friends and family especially birthday cards. I decorate the envelopes with vines, flowers, dots, strings of lights and sometimes stickers. Everyone enjoys them especially the children. But aren't we all excited as little children deep inside to get mail?

Jennifer -- so true about the stationery biz :(

I love getting a hand written letter...my sister is quite good at them, although she is part of a dying breed. I am totally obsessed with Papersource...used their envelope liners to make gifts of stationery recently.

Hi Laura -- I enjoy using their template kit and papers too. Used the template for the envelope pictured here :)

love all paper--stationary, thank you notes, scrapbook, etc.. I also was inspired by virginia Johnson--what beautiful works of art for the body. would love some of those prints for my home.

Handwritten letters are like little gems. The really do mean so much. I've saved two drawers full of them. From time to time, it's great to go back and rediscover heartfelt stories and experiences shared by friends and family. I love the colors of the fruit stamps. Very retro and chic.

I wish people wrote letters more; there's something so lovely about getting a handwritten letter. Great post as always!
xo Katherine aka. Urban Flea :)
www.urbanfleadesign.com

This post is so inspiring. I always love receiving letters (and occasionally remembering to send them!). They stay in your life - so different from email. I keep finding old family letters and they are such treasures. It's really reminded me how important it is to write.
A favorite new discovery of mine is PhotoStamps for personalizing stamps. You can upload any image you want (artwork, photos, etc.) and order the stamps. Great for weddings or just fun. http://photo.stamps.com/Store/

That certainly makes me feel like I need to get busy with my birthday thank-you notes! Beautiful stamps and notecards always make the chore more of a joy!

Love this post. Every image feels like summer. Just what I needed when it is pouring outside.

Hi! I just found your beautiful blog and I linked to this post on my blog about thank you notes. I too love handwritten letters but sadly, people just aren't writing thank yous like they used to. The ones that Vogue's book calls "bread & butter" letters just aren't. You can't take it for granted that people will sit down and write thank yous even for weddings or graduations anymore.

By the way I love all of the stamps in your post and I also am a big Paper Source fan as well.

Hi Juliet -- thank you so much.

Sadly, I agree some people don't even acknowledge graduation presents these days.

I wish you would share one of your uncle's letters with us. I like to send letters, but sometimes I run short on inspiration.