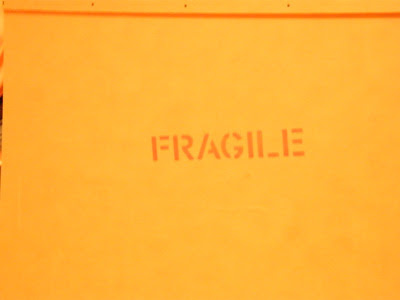 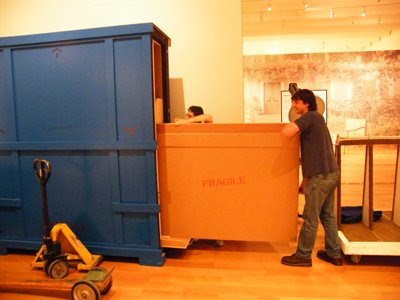 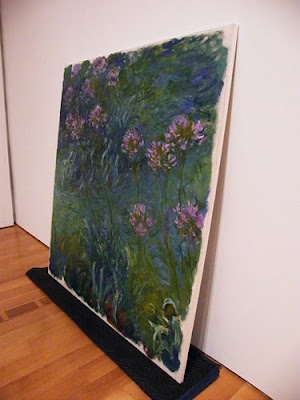 In roughly seven days and nine hours, Monet Water Lilies opens to the general public at the High. I'm guessing photography won't be allowed up in the galleries, but just in case I'll be ready with Benjamin Moore's ben® Color Capture™, the soon-to-be-released app for iPhones. Ideally I might snap a quick detail from one of Monet's iconic paintings and the app could instantly tell me what shade of deep green in Benjamin Moore's collection best matches a green used by the artist. 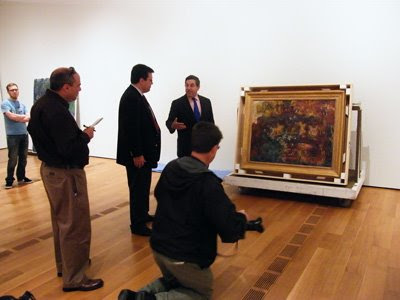 The picture above is a bit blurry but it looks like David Brenneman, Director of Collections and Exhibitions and Curator of European Art, and the High's fearless leader, Michael Shapiro, are on hand for the installation. (All images belong to the museum; see more on the Flickr page.) 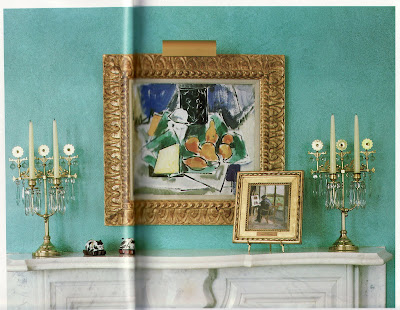 I'm also curious to see how the app works with pictures of pictures. Although we've seen a lot of blue-green walls in the past few years, I still like the paint color above. (The framed abstract is by American-in-Paris, Alfred Maurer, whose early-20th-century work is associated with the Fauve movement. Image is from Accents on Accessories.) 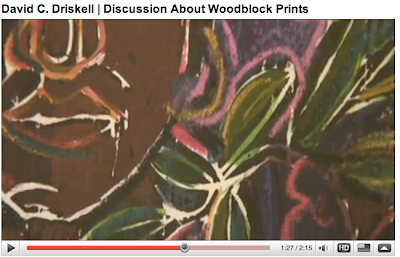 BTW: Evolution: Five Decades of Printmaking by David C. Driskell remains on view at the High through August. Here's a related link.
Posted by Style Court at 2:44 PM

Wow!! To be that close to the Water lillies as they come out of the crate...exciting. I saw them while in NY but they were already on exhiibit...surprisingly a large expansive series of canvas's.
Even better in person. Thanks for sharing...one would get the feeling of the unveiling of Jackson Pollack's masterpiece from the movie Mona Lisa Smile.
Leslie

I am going to try to come from Charlotte for this. If I can't I will look forward to hearing about it all through you!

Leslie -- love that scene in the movie :)

The awe & revelry that awaits you.
I pray you are able to find a less crowded time to view.
I doubt you'll be able to sneak a pic maybe if a guard or docent sneezes or bring a friend & have her collapse to the floor.....
seriously, his colors, brushstrokes, it's life changing.

I love the water lilies at the Moma and the way the canvas is hung, slanted so you feel the perspective.
Today, I posted work by an artist who painted the water lilies too - long before Monet. It seems many artists find intrigue in their beauty and color.

Oh lucky lucky you! I saw some of his work and gardens in France. I like what the above poster said...life changing!

Courtney, How wonderful. Thank you so much for sharing with us!

how great to be that close! My Parents and I went to a Monet exhibit 2 summers ago.. it was absolutely fabulous and so interesting to learn about his life and how his personal issues affected his painting... enjoy!!!

I really enjoy hearing about peoples experiences with art. This is a wonderful treat and please let us know how the iphone app works also. Together, this will be educational, high tech meets classic art form!

Everyone -- thanks for the enthusiastic comments. I'm excited about seeing new angles.