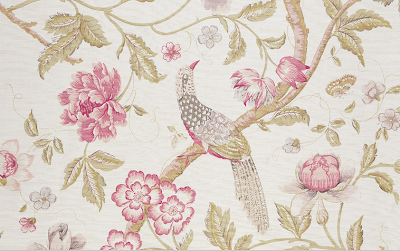 These days when my mom leaves her name for coffee pick-up at the Starbuck's counter, the response from the youngest employees is often, "How do you spell it? That's such a cool name." Pretty comical for her to hear since she has disliked it her entire life. Apart from some women she grew up with who were named for Generals Buchanan, Pickett and Fontaine, most of her peers went by Mary or Jean. No one had an old fashioned name like Mom's. (It was her great-grandmother's and, to me, is of the same ilk as names like Sela or Melissa Rufty's mother's.) But to a 19-year-old, it's now so retro that it's fresh. 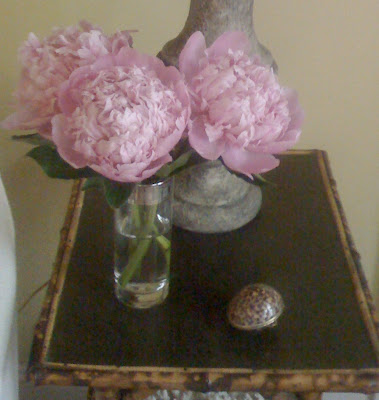 This phenomenon reminds me of the drastically different reactions people have to flower arrangements and to interiors. Remember the Elle Decor reader who complained about the puffy flowers that, to his mind, resembled an "old lady's hair-do?" In contrast, Lia recently left this comment on my blog: "Peonies are lush and sensuous like jazz on a sultry summer night. That's the way they make me feel." 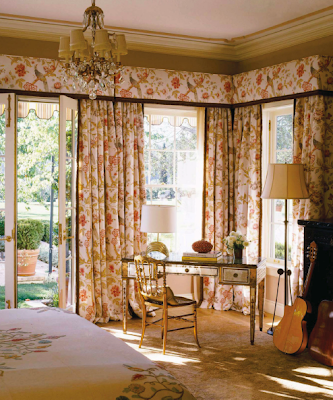 I think these full-tilt Bennison curtains rock. In Kristen Buckingham's house they represent a whole new form of California Dreamin'. Mom, on the other hand, has already lived through the era of valances and acres of florals. She appreciates the beautiful linen-cotton "Chinese Pheasant," but she prefers curtains that hang simply from handsome rods. 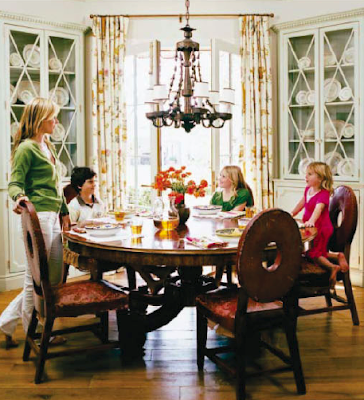 Where's your personal line between old and new? How old does something have to be before it starts to feel revolutionary again? 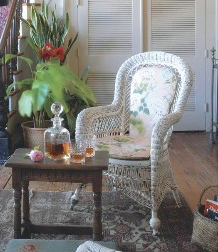 What do you think of the welcoming vignette above, captured by Kerri McCaffety for New Orleans Homes & Lifestyles, May 2009?

[Interior design shown in images three and four is by Kristen Buckingham. Photography by Simon Upton as seen in the March 2009 Elle Decor.] 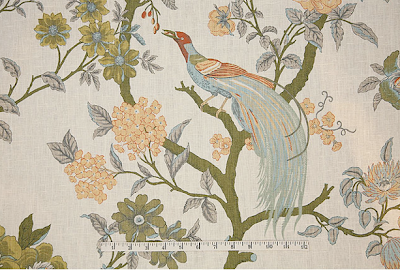 It seems like we have had decades of solid curtains - or none at all. No surprise, yards and yards of floral seems fresh to me now. And, while I have been firmly in your mother's camp, I am seeing the appeal of a valance.

When we lived in the city, I had lovely curtains - custom made - hung from handsome rods and have saved them, for one day. Now we live in a mid century mod home and it really does not ask for much in the way of curtains. I do love how a simple swath of fabric can transform a place, and add a "sound of music!" I even envisioned a wardrobe for my family -
alas, I will leave that in the idea box!

peonies are all around this days ... pretty blog .

Good thought. I don't know how old, but I know I love peonies and am so excited to see the first one bloom in my garden this weekend. My hubby and I are having a wicker argument right now. I kinda want 2 chairs for the porch (never wanted them before) he thinks they look old. Funny.

Enjoyable post ... anything to do with fabrics and peonies have my full attention!

Everyone, this is great input -- thanks!!

As for old and new, I would say "sconces" seem to be making a comeback. I love old sconces fitted for light!
pve

Courtney,
Your peonies are looking lovelier than ever! I like both simple window treatments and the more "fussy" arrangements, just depends on the context.

Nothing surprises me & I never discount anything old as being..well, old.
My first job was for an antiques dealer & even though I morphed into running home decor boutiques I always laughed at the new fabrics, colors & styles that I saw all those years ago...that we purchased from even further back.
Good style never goes out of fashion everywhere.

what is your mom's name?

I'll have to ask her if she minds me using it on the blog -- you know, privacy issues and all. It rhymes with Ella but it's not Stella.

French General is such a treasure. I once drove 3 hours in traffic with a 2 year old to get some vintage fabric there and it was worth it. They have beautiful reasonable stuff!

this is my favorite bennison pattern!!!! brooke has it in her living room and when I saw that I felt we were alike in some way. a love of a specific fabric can bring people together I think. I can't believe you showed this one particular fabric. :)

Joni -- I agree, fabric can bring people together in a strange way!

Everyone -- thanks for these great comments.

I may be a little late to the commenting party - here goes anyway ... :)

Maybe I am a little bit unsophisticated but I try to focus on what is truly beautiful instead of what is new or seems new (i.e., vintage or antique). I find it challenging, which is probably why I tend to like old things because they have stood the test of time; by the same token, I am wary of new things because I wonder if I'd be embarrassed to be in possession of them a decade later.

Now, wicker can be beautiful (especially if it doesn't veer too far to the precious) and the valances can be elegant in the proper setting.

We absolutely adore peonies and use them frequently in our arrangements. My Japanese tree peonies in my backyard were amazing this year!

I just bought a huge fresh bunch of peonies today and they've perfumed my entire bedroom. I find so much visual inspiration in the beautiful color and the tight clusters of petals. I would love to see more peony-based fabrics personally.
urbanflea@gmail.com
www.urbanfleadesign.com

I think you may have caused a run on peonies in Atlanta. Not a stem to be found yesterday at wholefoods or fresh market. At least hydrangeas are in season. I am all for the big, puffy old lady hairdo flowers!

What a great post... where have I been? French General? I feel like I must have been under a rock or something. That fabric caused me to have heart palpitations.
I vacilate between old and new, floral and solid, valance and rods, wicker and teak... perhaps I am too wishy-washy? Or maybe like the other reader who commented, can appreciate the beauty in them all? Or maybe I'm just not old enough to associate these with eras yet? Who knows... great post!
ps- love the name Della. ;)

Erika -- for what it's worth, I love all the valances you've been posting lately.