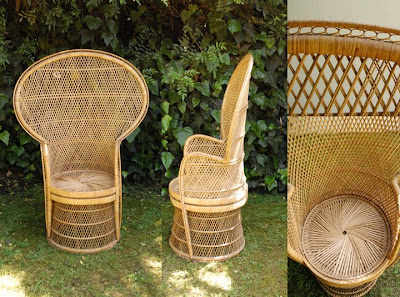 I'd like to say my first exposure to the dramatic wicker "empress" or "peacock" chair was at a chic antique show, but to be honest my earliest memory comes from Addams Family re-runs. (Didn't Morticia have something like this?) And on Designing Women, first season I think, Charlene sat in one pulled up to her desk. So, when Vicky Molinelli recently suggested her vintage find might make a stylish antidote to the standard issue office chair, I smiled, imagining the possibilities.

Wicker was all the rage in the West during the late 19th century, in part because rattan and cane reminded Americans of the Far East, and industrialization made it easier to produce the furniture on a large scale. Vicky loves these pieces left natural but still can't help fantasizing about painting her 1960s chair red. 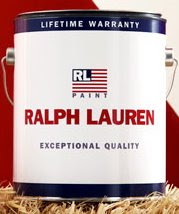 She tells me she is also drawn to the idea of a glazed chintz cushion: Cowtan & Tout's "Bowood." She explains, "I like the idea of red contrasting with a chintz; a flowery chintz in reds and blues with solid red or blue piping. It's an unexpected contrast for this tropical chair but I think it would work. Any chintz with some red in it would look great." 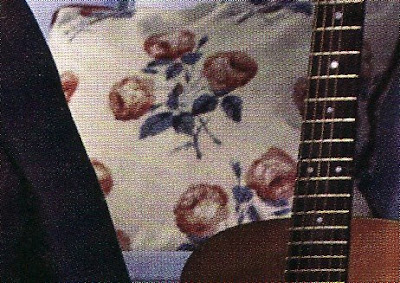 She also thinks the chair could be elegant and fun at a dressing table, and she adds, "Yes, we've all seen it before, but a pair of [host and hostess] chairs at a long outdoor dining table would be delish." Paint options include bright green or turquoise. ("Fig Leaf" appeals to Vicky for a cushion.)

Other possibilities for this style chair involve what Vicky calls "the boring corner or any spot you might want to cover up for some reason." She says, "High chairs make good corner chairs. Of course, this chair would have to be angled quite a bit because it's so wide, but that is were plants and lamps always do the fill-in trick!" 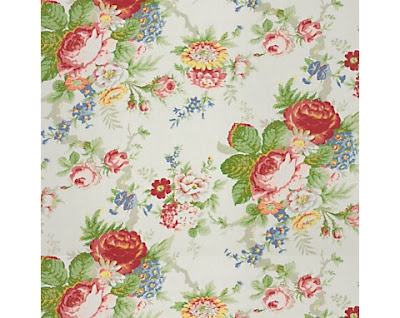 "Bowood" is shown in image three, and directly above is Ralph Lauren's "Garden Club."

Originally from Buenos Aires, Vicky is an artist who attended the Rhode Island School of Design and completed her studies in Argentina with a BFA in Painting and Education. She has worked alongside Ruthie Sommers in L.A. and she now sells her own vintage finds online.

The original Designing Women chair can be seen on YouTube.
Posted by Style Court at 9:07 AM

Love the sitcom memories! I agree--paint it red!

Glad I am not alone... My friends thought I was nuts to buy my big peacock chairs. Still debating whether to paint them Dove White... Wish my walls were covered in grasscloth for contrast. Sigh...

I am with you, Courtney, these are great, but I cannot see one without thinking of Morticia on the Adams Family! Very 70's chic!

I wish we could see a Vicky revamp of the Designing Women set. That would be fun :) I'd love to see this chair with an unexpected desk.

I once bought one for fun at a garage sale (white, probably 10 dollars)since I had a big new house and not enough furniture. Even later it remained in a guest room with a Ralph Lauren white and blue china pattern cushion (same as the bedspread and shams). It was quite nice and made a statement. Thanks for the memory

Oh my goodness, we have a leather (sort of Native American style) version of the peacock chair at the mountain house, and now I am wondering if it could be a cool piece of furniture! So funny! I am tempted to bring it home now...

I favor the "Fig Leaf" pattern, and I would love to see that "Peacock" chair come to life painted teal, or charcoal, or even a milder version of a soft grey stain. ...or do we dare...a pecan stain. Good luck!

In the 70s, I think everyone I knew had a peacock chair! They were really inexpensive (Pier 1 maybe), and I was shocked to see some recently on 1stdibs for over $1000. Maybe there were more expensive versions made? I'm not sure.

we love those peacock chairs and we love all things designing women!

I just bought some for my nana.she loved them!

I had a peacock chair and I know it went for, oh probably $5 at a garage sale way back when!