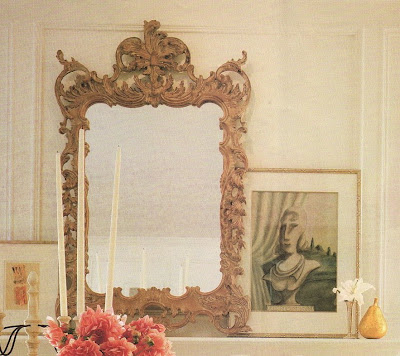 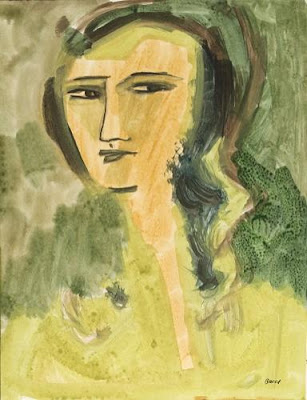 [All image credits follow below.]
By the time I was in fourth grade, I was aware of two – no, make that three – types of portraits: The kind my friend Millie describes as the ones with fuzzy-focused girls in white dresses in front of the azaleas; the boy with spaniel; and the art school sketch.

Like Millie, I always wondered why my parents didn’t contact one of the artists who advertised in Veranda and commission a painting. Most of my fellow Girl Scouts had been immortalized in pastel. And while my grandparents (on Mom’s side) weren’t big portrait patrons either, they did have a sculpted self-portrait made by my then-undergraduate-artist aunt. But Momo and Granddaddy didn’t quite have David Hicks’ flair for tablescapes, so somehow the bust ended up on top of their TV in the den. 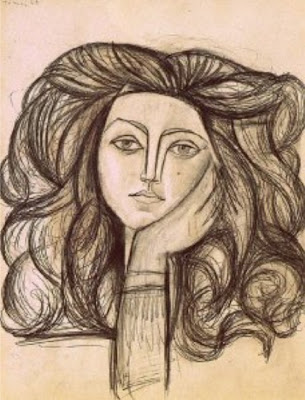 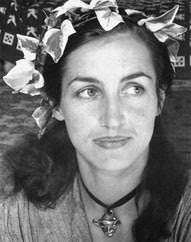 Later I realized that women who lead cool lives always seem to have a bunch of great drawings given to them by artist boyfriends or pals. (Francoise Gilot being an ultimate example.) Recently, Mrs. Blandings toured a chic woman’s apartment where there was no shortage of sketches with interesting stories attached, you know, “Oh, so and so just did that by the pool.”

In her typical self-deprecating way, Mrs. Blandings claims that to date no one has been inspired to sketch her in any situation. 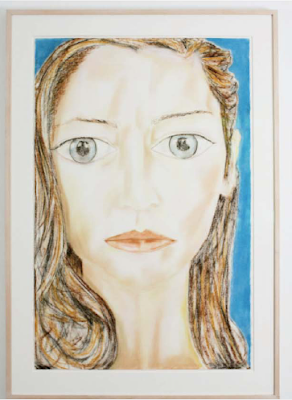 Millie's experience has been different. "Going to art school and being married to an artist, I actually have an embarrassing number of portraits of myself. They are mostly drawing exercises that I kept, though I have not had one hanging in years," she explains. 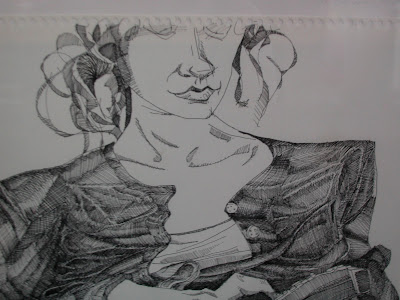 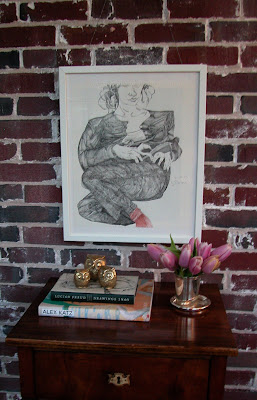 "I did just hang one that my husband sketched: Girl with Remote Control. It is only from my nose down and is a bit abstract, so it is not so obvious it is me." 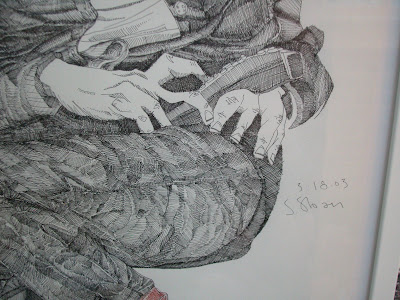 Millie and her husband happen to have a nude by another artist (of a different woman) hanging in their living room. It's a really strong piece of art, but every guest that enters the house asks if it's Mille; she's thinking about taking that one down. 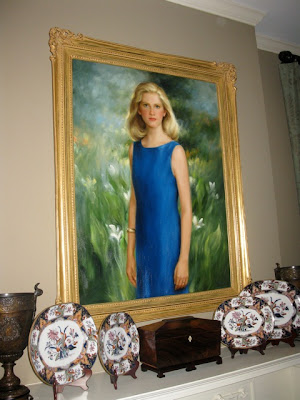 No, that's not January Jones above. When another Southerner, Mary Laura, was about 20, her parents commissioned something. "There is a portrait of me over the mantle in their library in Augusta, Georgia. It is life size. (Seriously, it looks like I am standing on the mantle.) I am not smiling in the portrait, and my natural facial features tend to default to a sort of serious, almost angry, expression. My dad calls it 'Firestarter' because my hair is sort of blowing back and I look like I might shoot flames out of my eyes at any moment," says ML.

Her brother calls it 'the shrine' because, "It's so darn huge and right there when you walk into the house." He thinks that the decorative urns and boxes sitting on the mantle look like they might contain her ashes. 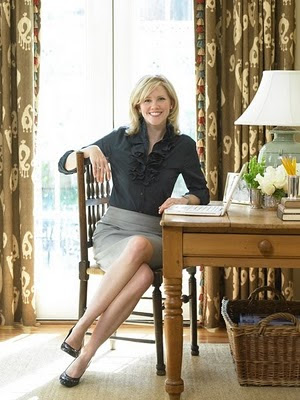 As a baby, Mary Laura's son called anything that scared him a "boo." One day, he walked past the doorway to her parents' library, pointed up at the portrait, and said, "Boo Mama." The portrait has been known as "Boomama" ever since. For example, at Christmas, the family hangs the stockings under "Boomama." 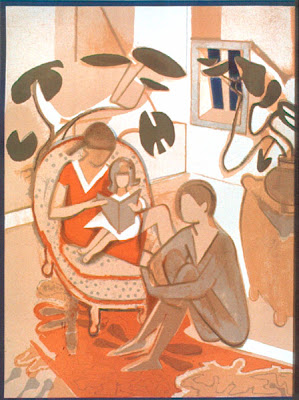 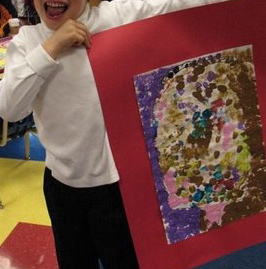 Still, Mary Laura appreciates these paintings, "I would love a portrait of me with my children and husband, capturing our collective youth. Having them in it would make it bearable to look at! And I know when I'm an old crone, I'll want to look back and see that I once had a single chin and only one set of bags under my eyes." 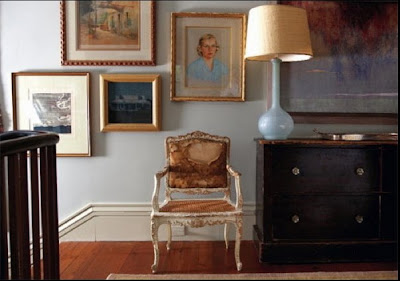 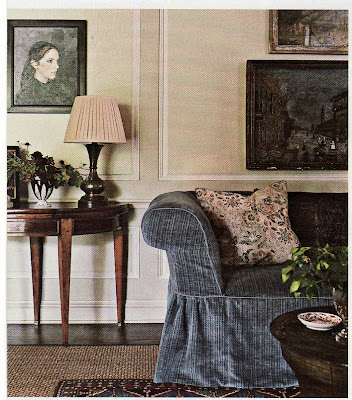 Millie says that for every unfortunate portrait she has seen, she's also seen a great one. She thinks living with them is kind of like driving a flashy car -- you either have the personality to work it or you don't. "To each his own." What do other Southern tastemakers and editors think of portraits in the home? Stay tuned for the personal experiences of Karen Carroll, Julie Miller, Angie Hranowsky, Lee Kleinhelter and others. To see related past posts, click the "portrait" label below.

Love seeing all of these beautiful portraits. Thanks for including me!

And yes, I cringe everytime someone asks if the nude is me. Not that there is anything wrong with posing nude, but I would die of embarrassment before I ever engaged in such!

Millie, Mary Laura has a similar story. She has a charcoal nude done by her aunt, who is an artist. It used to hang in her guest room. One holiday, as the family was sitting by the fire, her mother in law complimented it: "that is such a lovely nude in the guest room-- is it you?" "NO," she said, "it's not me!!" Especially not in the guest room :)

I'm completly addetic to your blog , that mixt about life art and deco is so refreshing ! ,.
take care
Zelda

Oh Zelda, you made my day! Thanks. And thanks to my friends who have such great adventures to share!

what a GREAT post. 'Firestarter' had me in stitches! I wonder if portraits are more popular among Southerners? my parents had one done of me by local atlanta artist steve penley (at least I think he was local at the time?) when I was 15 years old and totally not at all into having my portrait done. his style wasn't your typical portrait style and while I look as angst ridden as your average teenager, I'm actually really happy my mom insisted. can't wait to hear more about this subject!

Sweet Life -- I think they are especially popular in the South. At least I sure did have a lot of friends and cousins who sat for portraits. Yours sounds SO original!

Thanks for stopping by.

love reading this blog--i feel like i know nothing about the South but gain knowledge after each posting. In Arizona, i know not one soul that "sat" for a portrait. interesting regional differences.
i do love the idea of capturing my youth in oils but at this point they will have to find my youth in a photograph!
kelley

Hi Kelley -- I appreciate that. I'm having fun with parts 2, 3, maybe 4, to come next, sharing who had their portraits done and who didn't :)

My husband's grandmother was immortalized in a huge oil painting, and my in-laws received it after her death. They hung it in the basement. Soon after hanging it, they would find their black lab downstairs barking at it every day. It was quite disconcerting...we were half convinced it was haunted (or maybe like the portraits in Hogwarts of the headmasters...with a little bit of lifeforce in there!). They say that artists capture a little bit of their subject's soul when doing a portrait.

Have you ever seen the portraits by the Spanish impressionist Sorolla? They are mesmerizing.

I loved the firestarter story! The picture of Mary Laura's son is in a familiar setting...the distinctive green of the trim and the colorful floors can only be found in one place :).

Things that Inspire -- hysterical. Will it be yours one day?

I've seen some great "gentleman" portraits by Sorolla. But you've prompted me to Google and see more.

I love this series!

What wonderful images and stories. The boomama is terrific. My husband is an artist and our house (and definitely our basement) is littered with portraits of former girlfriends. Many of them I like a great deal as works of art, so the subject doesn't bother me — though others are often surprised when they ask about the story behind the portrait!

Ms. Wis -- you may win the award for best backstory :)

Boomama is a hysterical story. Kids tell it like it is

Stacy, yes they do!

Such a fascinating post. I don't think I could ever have a portrait of me hanging in my own house, but I love portraits of children. My mother had mine painted when I was about six. I could never figure out why she put me in my scuffed shoes and why my hair wasn't perfect (even though I was wearing my best dress), but now I realize how much more interesting those details made the portrait. Can't wait to read about more experiences with portraits.