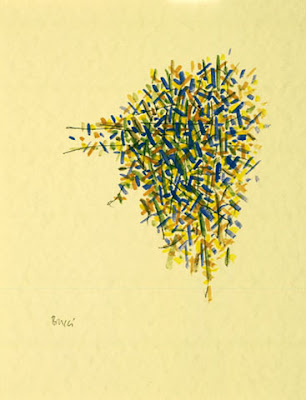 The allure of art gallery visits as a no-cost but still worthwhile activity seems to be spreading. Especially for date night. (And depending on where you live, museum tours often cost less than going out to eat.) Since artist Andrew Bucci is my current obsession, I want to quickly share a little more information about where to see his work.

Bucci is represented by Brown's Fine Art in Jackson, Mississippi, as well as the gallery mentioned earlier, Cole Pratt, and the Ogden owns quite a few of his works. This year 87-year-old Bucci was chosen to receive the Mississippi governor's Lifetime Achievement Award for the arts. Influences over the decades have ranged from Matisse to Japanese woodblock prints to noted Southern artist and teacher, Marie Hull. At age 17, Bucci began studying with Hull once a week. It's said that the tables later turned, and the student influenced the teacher. 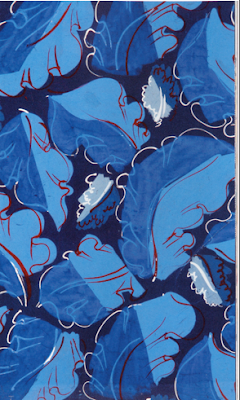 And a reminder for our friends in Mississippi: Raoul Dufy: A Celebration of Beauty recently opened at Mississippi Museum of Art. This exhibition includes around 100 original silk fabrics and textile designs presented from the archives of Bianchini-Ferier in Lyon, France, along with roughly 100 paintings. The show closes July 5, 2009.

Shown at top, Bucci's untitled watercolor and charcoal pencil on paper, courtesy The Ogden Museum of Southern Art, and shown second, an untitled design from Dufy, courtesy the MMA. 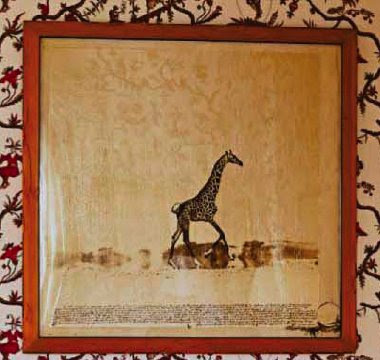 Oh and one more thing. Those of you who are longtime readers know I'm a Peter Beard fan. A photograph of his appears in Lee Radziwell's library in the April Elle Decor. Fellow enthusiasts will enjoy seeing it I think.
Posted by Style Court at 4:37 PM

Thank you for the introduction to Bucci- what a talent he is! Love the Peter Beard photo; actually, I also loved both Radziwill homes!

Dufy textiles. Be still my heart. Wish I could get down there to see the exhibition.

This is a great Peter Beard photo - I have been collecting his books for many years...He is truly a facinating person....brilliant..and rather eccentric.