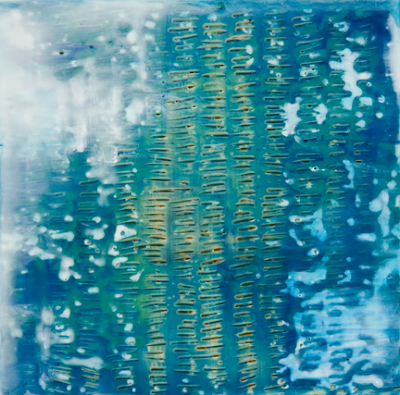 In tune with the times, the Dalton Gallery at Agnes Scott College has organized All Small, Redux. Each work included is six images at most, or in the case of film, sixty seconds in length. It's all about the new era of scaling down. The tiny work above is Michele Schuff's. Her very small encaustic pieces grew from studying images of water crystals and pondering the meaning of water. ("Encaustic" refers to a painting method in which pigment is mixed with beeswax. )

If you've never visited the Dana Fine Arts building at Agnes Scott, it has a rather magical quality. John Portman designed it in the 1960s and it could be described as a modern riff on the school's existing Gothic-inspired architecture. When sunlight filters through the two-story brick screen that fronts the building, it is beautiful. All Small runs through March 22.

Images of Dana are via the Historic Campus Architecture Project
Posted by Style Court at 12:23 PM

Dana Fine Arts is, in my opinion, John Portman's finest building. I drive by it twice a week and go a few blocks out of the way to see it. Lot's of little details in the brick: in some places it's a "hole" on other places, it's a black colored brick that looks like a hole.

Now they have the new Julia Thompson Chapel. Excellent!

Hi Terry, I agree it's a very intriguing building. Kind of soulful. Thanks for reminding us about the chapel!

I have many fond memories of becoming an artist within this wonderful building. It truly has magic in the architecture!

I thought this was going to have a Dr. Seuss reference - too much Hop on Pop for me.

I think my mind was too slow to think of that clever twist today!

While I find myself working on larger canvases and paper all the time; I really love small paintings with unique detals, a wonderful strength about them.

What a lovely concept for a show. I really like the piece by Joo Yeon Woon.

Karen and Janet -- this show made me think of both of you :)

I have never been on the Agnes Scott campus. Thanks for two great reasons to visit.