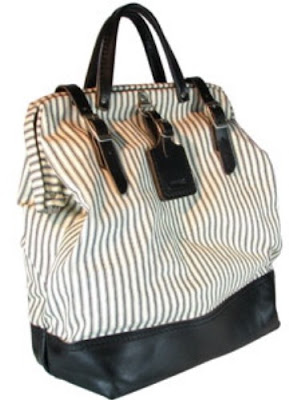 All of the friends I contacted regarding the Mental Traveler series have led interesting lives but currently, because of personal responsibilities, aren't usually jetting to exotic locals. For me, the whole point was to focus on the imagination and on sharing some knowledge. Janet Blyberg was the exception because with her career she travels internationally quite a bit. Yet she also knows how to appreciate what's in her own back yard.

She says, "Growing up overseas, and moving every couple of years, there was one constant in my life: summers in Maine. As an adult I travel extensively for work, and have been lucky to see many amazing places. However, when I think about where I truly love to be, it is in Maine. It is where I go to recharge, reaffirm, and refocus." 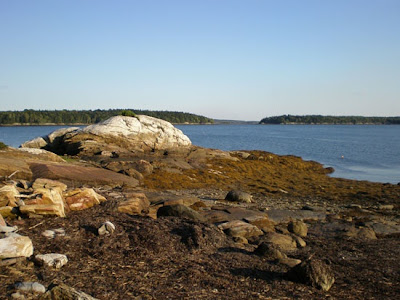 "There is just something about the wild coast of Maine that inspires: the water, the rugged, rocky beaches, white clapboard houses, and the luminous light (oh, that light!). Many artists have heard the siren call of its landscape: John Marin, Edward Hopper, Fairfield Porter, and several generations of Wyeths. Each capturing the essence of Maine in their own unique way."

"Like the very first rusticators, I go in search of the uncomplicated. I delight in simple things: a pint of blueberries left on the boat house steps, hunting for sea glass on the beach with a gaggle of children, making apple crisp with fruit from a neighbor’s orchard, eating raspberries straight off the bush, endless hours spent looking at the same stretch of coastland, and the discovery of the unexpected."

Janet adds that if she could take off for Maine, without family obligations, or several hundred hours of jet lag to sleep off, she would spend more time exploring the coast, and do a focused tour of old houses:

The Tate House, a Georgian house built in 1755 tells the story of Maine’s colonial roots. 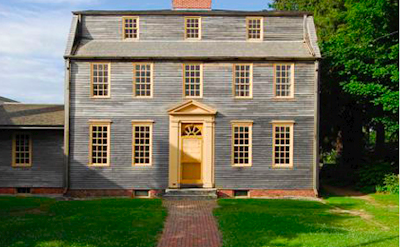 Skolfield-Whittier House is located just off Maine Street in Brunswick. This early-Victorian house tells the extraordinary (and slightly odd) story of a shipbuilding family, whose entire house and estate was preserved intact.

The Ruggles House is a glorious New England Federal-style house known for its astonishing flying staircase and Adamesque interior.

Jonathan Fisher House is tucked away in picturesque Blue Hill, and named by Frommers as one of the two most intriguing historic houses in Maine. Janet notes, "This was the home of a truly fascinating man, Jonathan Fisher, a pastor, artist, carpenter, and writer."

Woodlawn was built between 1824 and 1827, and was home to three-generations of a distinguished Maine family. It retains many of its original furnishings.

Janet photographed everything here, except the Queen Anne's Lace captured by her young niece, and Tate House. Haskell Harris introduced me to Billy Kirk bags, a sample is shown at top.
Posted by Style Court at 11:07 AM

I am so envious of Janet's photographic eye, and also so pleased to know her and count her as a friend!

She is so talented Meg, and incredibly generous!

Such a heartfelt valentine to the state of Maine is so appropriate for the month of February. Thank you for this!

Janet sees beauty in the everyday objects which most of us overlook. In her next life she will have many different careers to choose from--photographer; interior designer; chef...the list goes on. I have been privileged to receive an invite to visit her in Maine and I can't wait to do so! ~MIR