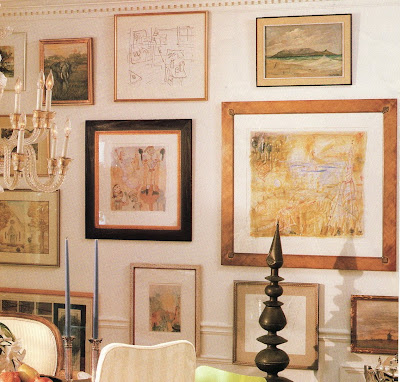 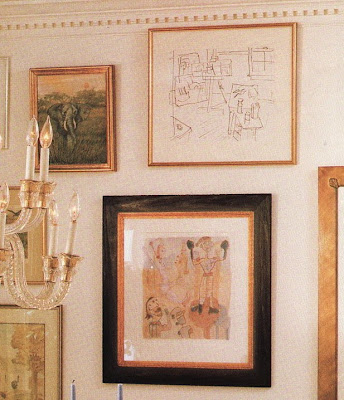 Some of you asked for a recap of gallery-style walls with disparate frames -- a mix of gilded, both silver and gold, stained, and painted. In a few of the examples shown here, not only are the frames varied but the art too represents a range of media. Oils, sketches, watercolors and even photography mingle together on the same wall. 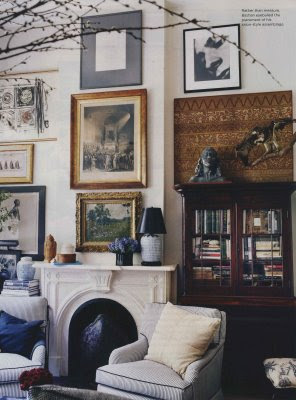 The top two images are cropped from a photo by Langdon Clay, and the subject is design journalist Frances Schultz's art collection circa 1990s. Directly above is Michael Bastian's apartment, photographed by Melanie Acevedo for domino, September, 2008, courtesy Mrs. Blandings. 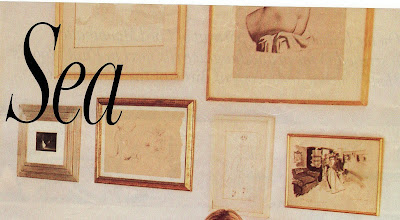 Above is a detailed view of a grouping in India Hicks' house. The piece hanging in the lower left demonstrates how a wide mat and substantial frame can give gravitas to a tiny work. The eye is really drawn in. And directly to the right, note the exposed rough edges of the work on paper. When dealing with sketches and watercolors, sometimes a choice has to be made about how far in to go with the mat -- or how to mount the art. Here the character is preserved. 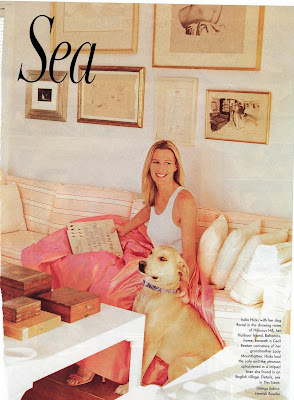 Hanging above India is a Cecil Beaton caricature of her grandmother, Lady Mountbatten. Photo by Arthur Elgort as seen in Vogue, 1998. The image below is pretty self-explanatory. I decided to include it because, while the art was collected over time, the tones in the works and the frames are not highly varied -- at least in the picture they don't appear to be. 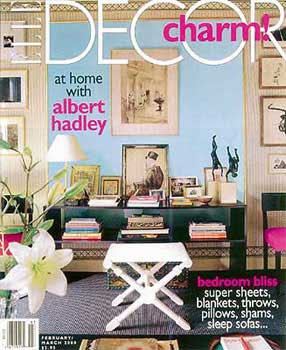 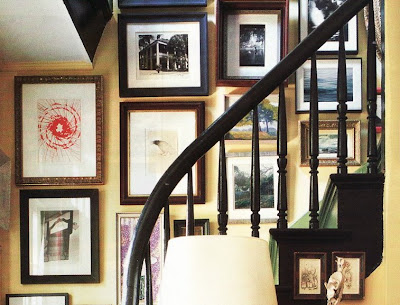 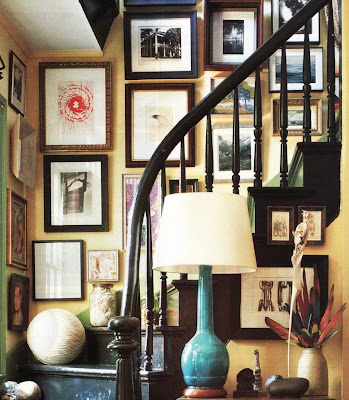 While we're on the subject of presentation, I want to thank Cassandra for asking me about color and for putting my choices together in such a pretty post! BTW: those beautiful photographs of Mary McDonald's guest house shot by Miguel Flores-Vianna are not spoilers. You can see the published slideshow right here. Enjoy. 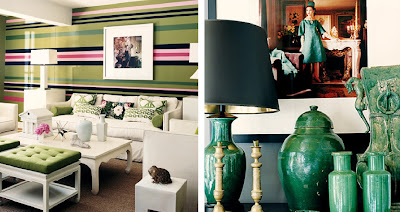 Click here to learn more about Mary's Mark Shaw photograph. Or here for more on Shaw in general. 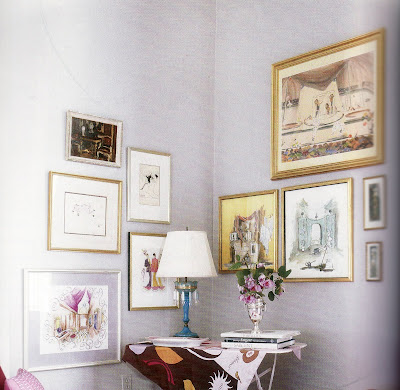 Afterthought: Another inspired arrangement in Angele Parlange's house, from Creole Thrift.
Posted by Style Court at 8:56 AM

Great post! Quick question about hanging pictures flanking a door or window. If they are similar in size but different prints and frames, should they be lined up at the bottom so they are both at the same height from the ground or should they still just be hung at eye level and disregard symmetry?

Hi Sarah -- good question. I think, if you want to go by "rules," the answer may have to do with eye level and the center of the art. Let me see if I can find an answer published in my book or elsewhere.

Southern Accents says pictures should be lined up by their center lines, not the tops of the works. This should apply if a window separates them. And yes, use eye level as your guide too.

Thanks so much that really helped! Happy Weekend!

My pleasure! Have fun arranging your art.

Courtney, this tutorial on framing is BEYOND. Your breadth of knowledge never ceases to amaze me. When is your book coming out?

Hi Lisa, I can't take credit. All I'm doing is researching other people's books and articles. But thanks! Glad to know this was helpful.

This whole series has been outstanding - and so timely for me. These posts were a lot of work; know they were appreciated.

Courtney~
These posts on art and framing are terrific. Thank you, I so enjoyed them and they are chock-full of great examples.

Love the walls in the colorful horizontal stripe!

Framing is an art but so is hanging ...These exemples are interesting and inspiring !
I wrote a post about french frames
http://enseignedegersaint.typepad.fr/provence/2009/01/frames.html

Writing is on the wall, for a style bible of sorts by you my dear. A collection of well said, well framed, and well hung art.
Thanks for sharing.

ohhh - i really love that last little corner you posted. such great asymmetry. and thank you so much for joining in on the color week! was great to have you :)

I am in love with frames!! this is a nice collection of ideas on how to use them!

I clipped the New Orleans Clapper house out of House Beautiful and have had it ever since. That was and is still a great collection and arrangement of art going up the stairwell. I have always admired the simple arrangement on the entry table, a vase with a collection of feathers and a tall turquoise ceramic lamp. A local antique store had a lamp almost identical to that one and I never bought it, the store is closed now and I kick myself for not buying it.