Right now, in response to stress, some of my friends are saying they want to stay home under the covers. But personally I'd like to escape to a darkened art history seminar room and indulge in a few fascinating courses. I'm envious of current Agnes Scott students because there are some intriguing ones now offered by the art department: Women As Artists and Patrons from the 12th to the 17th Centuries, and Face Off: The Art of Self-Portraiture, just to name two. 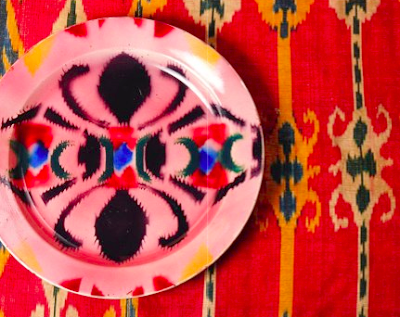 What I can do is post more arts-related content. The ikat-patterned plates shown here instantly caught my eye as I flipped through Selvedge, issue 14. To be honest, I assumed patterned plates like this were a relatively new thing. 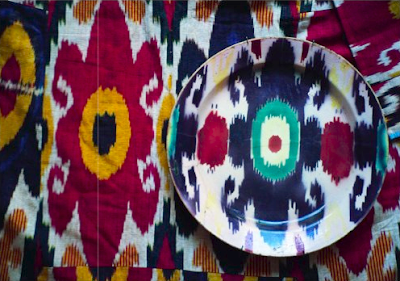 Actually, according to Victoria Rivers, many fabric-like patterned plates were produced in Russia between 1892 to 1917, with the oldest ikat plates coming from the Gardner porcelain factory. The older plates were decorated in faience style, meaning that an opaque white slip was used beneath colorful over-glazes. Later plates were sprayed with color. Hues favored include the same deep reds, pinks, blues, greens and violets seen in Bukhara-produced Central Asian textiles. 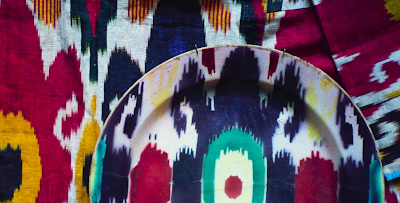 Common motifs encompass double rams' horns, concentric or rhomboidal-shaped eye spots, and varied parallel stripes. (To learn more, order a copy of issue 14 from Selvedge.) Since ikat became such a big trend during the past two years, and new products have been covered thoroughly in magazines, I'm not repeating those items today, but I did find a circa 1920 Russian/Soviet plate for sale here. If you are searching for similar contemporary tableware, try the Oscar de la Renta for Lunt line. 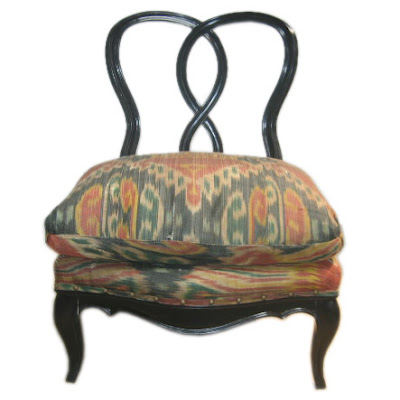 I thought this chair, currently for sale at Ceylon et Cie, might inspire a DIY project. Perhaps some black paint on a flea market chair and a new seat cover made using a found remnant. Click here for one of several related past posts with some fun flashbacks from the last ten years or so.

Oh and FYI, on the subject of textiles and education, Antique Collectors Club is currently offering 20 percent off all titles such as Liberty and Co. in the Fifties and Sixties, a book Style Beat wrote about a few days ago. 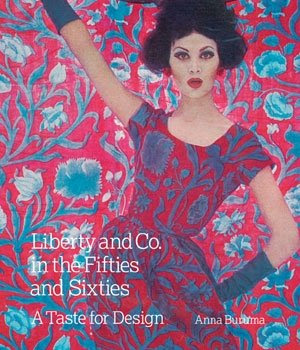 Email ThisBlogThis!Share to TwitterShare to FacebookShare to Pinterest
Labels: ikat

I simply LOVE all the art related content you have been posting recently. I look forward to my daily reads even more! AND, just in case you are interested, Emory is presenting a lecture Thursday Feb.19th at 5:30 by art-historian, Briony Fer on Eva Hesse. It should be great!

Oooh Emily, good to know! Thanks.

What an interesting post- thanks! I did not know at all about the early Russian textile like plates. I would love to hear more on that. Great pic on a DIY chair. Aren't we all needing more of those these days!

Laura -- appreciate your enthusiasm! Thanks for the input.

Does anyone make plates like this? If so, I can't find any. Clues? Thoughts? Leads?

I'd rather learn about interesting things than be depressed! Thank you for this post. I too would have thought the ikat patterned plates to be an up and coming trend. I did read somewhere that ikat patterns were going out of style??? What??? I haven't seen anything to indicate that ..have you? I have been just swooning over the new March issue of Elle Decor, the spread on the home in New Orleans that Richard Keith Langham did the interiors is fabulous! I had to blog about it today if you care to pop over and take a peek!

Thanks again for this bit of art history today! Always uplifting!

Aesthete -- I'm going to do more research on the multi-colored versions. I've got in the back of my head someone high-end like Oscar, and then Anthropologie was selling two-tone versions.

Okay Ivy, thanks! I liked the framed antique ikat on the cover. And yes, since it was such a craze the last two years I'm sure it will be deemed "out" for a while but in the long run, some ikat will always be classic I think.

ikats are my favorite

Gorgeous plates and what a lesson. Thank you!

fun tip on the books. Liberty prints are among my favorites

I love african inspiration for interiors . Frey made a new collection with this inspiration , it is lovely

I messed up with my comment ... Never mind . about ikat : I'm a big fan of this type of prints. I bought some wonderful ones in The grand bazaar in Istanbul

Hi Melanie -- I'll have to look for that collection. Thanks!

Hi Courtney, wonderful post, I had no idea about these plates and have never seen then anywhere! Ikat may end up being a classic if it isn't too overused. A touch here and there. I love it, Hmm maybe a painting to do!

Courtney- I'd love to join you in an art history class, but in the meantime I'll learn plenty from your posts! :)

J -- how cool would that be if we were all in the same art history class together?