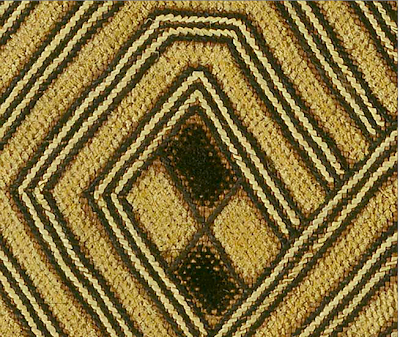 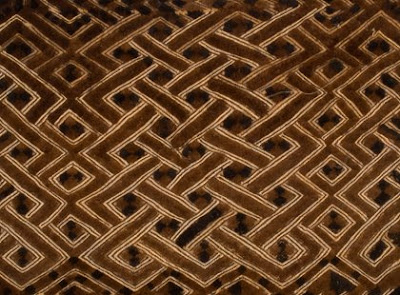 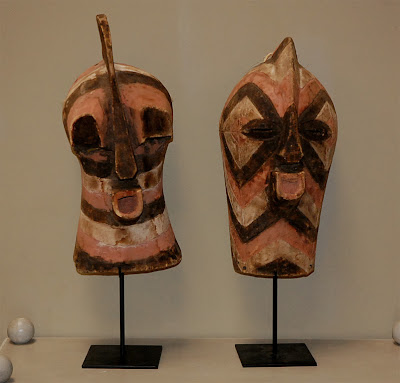 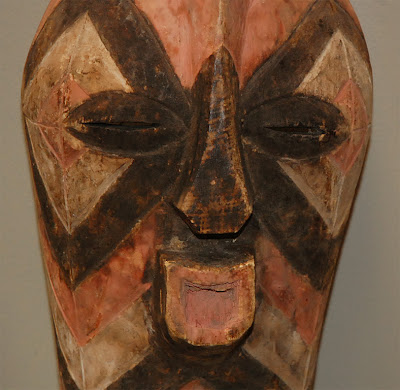 Europeans and Americans collecting African sculpture and other art forms is nothing new -- Picasso and Matisse are widely believed to be among the first to acquire African pieces, at least for their artistic worth. Lately though, I feel like I'm spotting more and more African masks, textiles, and stools at shops where I wouldn't necessarily expect to find them.

For example, the masks above are from Hollyhock and are described as hand-carved and painted 20th-century Kifwebe Masks from the Southeastern Democratic Republic of Congo. And Ceylon et Cie has a vintage Bene-Lulua mask from the border of Zaire and Angola. In terms of cloth, these textiles keep popping up in Michael Smith's projects. 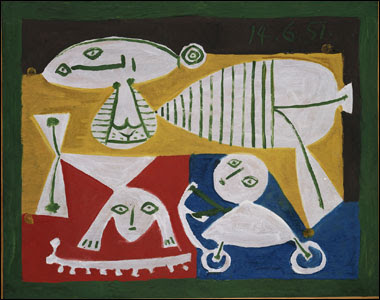 In 2006, the Iziko South African National Gallery was the site of an exhibition that explored the influence of African Art on Picasso's work. The Met also offers detailed information about African inspiration in avant-garde modern art. It's thought that in 1906 Matisse bought a small African figure from the Democratic Republic of Congo -- a work that greatly impacted him -- but the artist also collected Kuba cloth. Shown at the top is a 19th-20th-century example woven from raffia palm fiber (collection of The Met). The second example above is from Jayson Home. 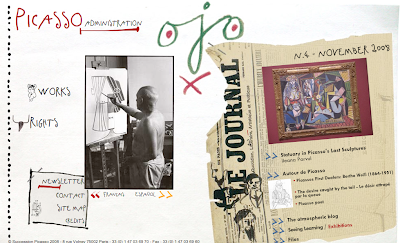 The image below is small, but I wanted to add it to the mix because of the petite "Kenya box" and the feathers. Rayman Boozer design in a tablescape for Essence, September 2006. A friendly reader sent me the image below, snapped at Kaba Africa Art at the Chelsea Flea Market in New York. (Outdoor Lot, 25th St. between Broadway & 6th Avenue, 917-696-3699.) I'm told the textiles represent Congo design, and as always I'm struck by the inspiration David Hicks derived from similar cloths. 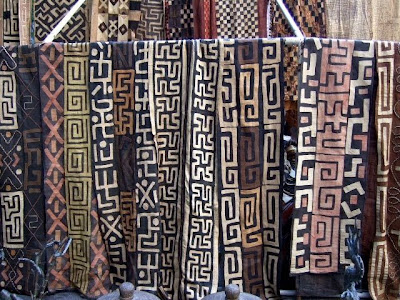 Below are samples from Hicks' scrapbooks as seen in David Hicks: Designer. 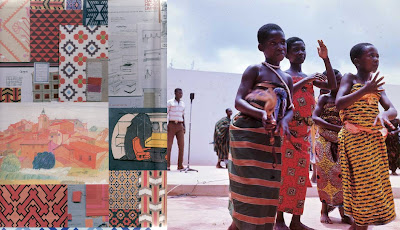 In Atlanta, the Carlos Museum has a strong collection of African art. Below is a copper and gold figure of a bull, from the Cote d’Ivoire, Lagoons Region, early 20th century. 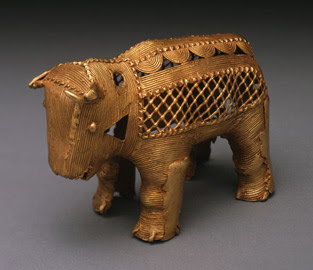 I just read the note above the comment box - is that new or have I just not noticed it before? At any rate "Bravo". I have stopped reading some blogs because of the bad energy they promote. It's your blog and your right to take control - I hope more follow your example.

So - my comment is really about this post - So exciting !! I am going to Africa in August and starting to file these articles. Thanks for the insight and inspiration.

I added the guideline in December or late November, partly do to sensitivity to potentially slanderous comments but also just to reflect a desired tone. I looked at NPR's guidelines and design*sponge's too. Also, I have some young readers, like 13-years old.

It's in the air and has been for awhile. Several of the houses Vogue has featured over the last year or so have had African fabrics in bits and pieces mixed with contemporary art....gallery dealer's family house in NYC(German - can't remember his name right now) and a Peter Marino farmhouse in Napa. I think it all started with Doro Olowu(fashion).

Thanks for posting this...I have some Kuba cloth pillows and have been picking up fabrics at the Eastern Market in DC(they always have authentic dealers there on the weekend...some very nice fabrics).

Love your blog...learned about it in Domino:( and thank you for the (new to me) Selvades info!

Anne Marie -- thanks all around. The DC market tip is really helpful and you've probably inspired many people to investigate.

Just another series of lovely and inspiring posts. I am in the process of redoing my office/guest room and just put out all my African and Chinese headrests on top of the bookcases. Across the room, I have a row of Japanese ikebana baskets on top of the armoire. So after reading your recent posts, I feel very au current. The next thing is clearly to pull some back issues of Selvedge off the shelf and read up on fabrics. Thanks again for these informative art and textile posts.

Thanks Ms. Wis -- it sounds like you have incredibly soulful interiors!

Miss Courtney, I have that very clipping from essence and indeed my house is almost that exact shade of blue with bits of Africa scattered about. I'm absolutely swooning over those traditional textiles. Once I have a proper dining room I'd love to have my parent's old cane-backed dining chairs upholstered in a funky fabric. Perfect for my Afrossippi Glam look!

Jamey -- those cane-back chairs sound great and would be amazing, I think, with kuba cloth seats or something similar. I love that soft blue background with just about everything :)

It seems to me Thomas O'Brien also incorporates this look quite a bit. All the best guys do, I suppose.

i sell the smaller types of kuba cloth, if anyone is interested at

also, african interiors, by taschen is a great resource if you're looking for inspiration.