History at a 30 Second Glance 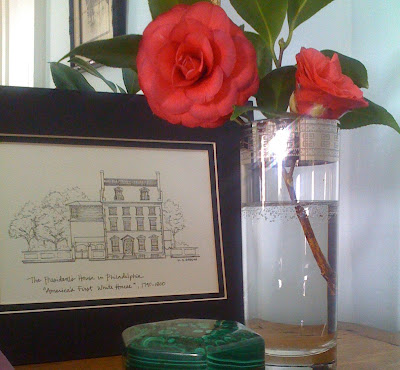 Interior designer Kelly Robson did this delicate architectural pen and ink sketch of The President's House in Philadelphia (click to enlarge). From 1790 to 1800, Philadelphia was the United States capital and this is where President Washington resided during his time in office. President John Adams also lived here for almost four years.

Often called "the first White House," the dwelling was owned by financier Robert Morris who rented it to Philadelphia for George Washington's use. In 1832, the building was gutted, and the land where it once stood -- on Market Street, one block north of Independence Hall -- eventually became a sometimes controversial archeological research site. 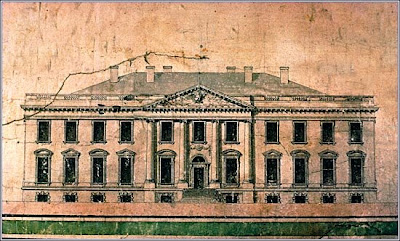 If you are looking for accurate information about the permanent home of the presidents, the official White House site and The White House Historical Association are good places to visit. Shown above is Irish-born architect James Hoban's White House design, courtesy the Maryland Historical Society. 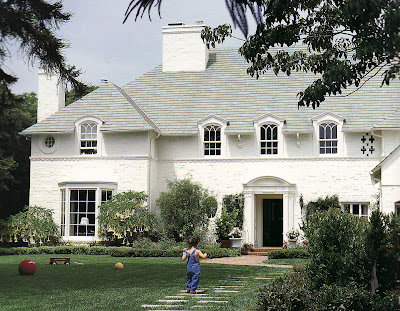 I also thought it would be nice this week to revisit the Paul Williams post. The first African American member and Fellow of the American Institute of Architects (AIA), classicist Williams designed the Brentwood house, shown above, in the early 20th century. Diane Dorrans Saeks describes the white-painted brick dwelling as a cinematic take on an English cottage. And yes, you guessed it, new "First Decorator," Michael Smith, did up this house not too long ago.

The last image is from Michael S.Smith: Elements of Style, Rizzoli, 2005.
Posted by Style Court at 12:53 PM

Terrific post, Courtney. History is amazing, and it is a perfect time in history to revisit it. I wonder how many Americans know that there was a prior Capital, let alone a prior White House!

I was in Washington a few weeks ago, and I'm always completely captivated by its splendid architecture.

We have precious little architecture here in Southern California, so when we pass by a Case Study home or a home designed by the great Paul Williams it is a particular delight. Of course the trouble when passing or visiting a Paul William's home is that one must eventually drive on. I could collect quite a number of parking tickets while soaking it all in!

(The home above is perhaps my favorite of his).

Oh thank you Anon. Sadly there are no Williams houses in my area, but if there were I think I'd be accused of stalking. Wonderful to hear from you.

I wonder why the MD Hist. Soc. has those works?

Thanks for posting my drawing, Courtney! I gasped when I read the post! Thanks again, I am really flattered. :)

My daughter researched him for an assignment at school.