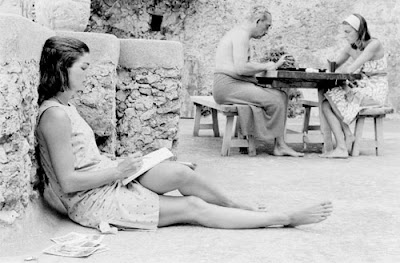 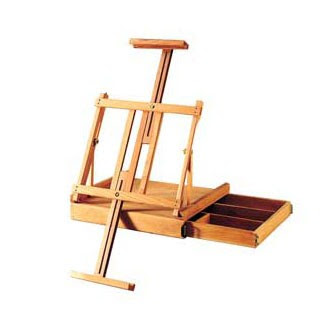 In the February issue of Harper's Bazaar, UK, Anya Hindmarch has a column patterned after Diana Vreeland's famous "Why Don't You?" series. Tip number two on Hindmarch's list is...

A friend of mine who was recently laid off from a creative job is planning to heed Hindmarch's advice. Sans the tuition fee, at least for now. Since her new position is less than rewarding, my friend wants to get back to her roots and do something artistic -- just for the joy of it. 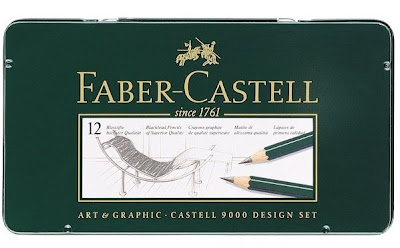 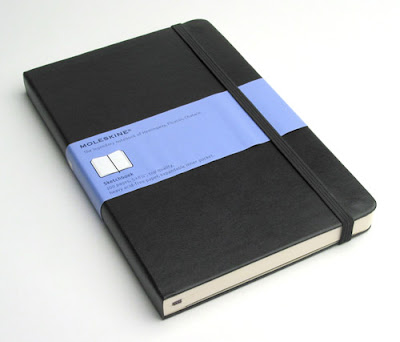 In general, drawing is more economical than painting and usually requires less fuss. At Sam Flax, a classic Moleskine sketchbook costs $11.95 and a nice set of pencils is about $13.

Jackie was photographed from time to time with a pencil or paintbrush in hand. To be honest, it's hard to tell in the image above if she is drawing or writing. Either way, the picture was taken in Ravello, Italy, 196os. Photo via Vanity Fair. The sketching easel at the top is also available at Sam Flax.
Posted by Style Court at 6:49 PM

Brilliant suggestion! I love the idea of the column and will check that out. Bet your sketches are as fab as your paintings. I know I'd love to see them!

Hi Paris -- you might have me confused with Anne Harwell, the artist who did my blog banner! She's so talented. Thanks for stopping by.

I agree that sketching is low fuss, something you can take with you and sketch on the go. Can't whip out your oils and canvas on the train!
Ness xx

A good pencil and accompanying good paper is essential and should always be kept close. For work or play, these, in my opinion are indispensable.

That image of Jackie is one of my very favorites. She seems so contemplative.

I have that exact same easel briefcase! It's extremely convenient and surprisingly sturdy. I'd recommend it for anyone who wants to start painting and doesn't want to buy a big easel.

Ooooh I love this! Makes me want to draw.

Well of course, this speaks directly to me. I only wish I had a penny for people who make the same remark when they see me sketch - "If only I could draw a straight line" - and I reply, but if only you tried, you would see that a straight line is highly over-rated, it is the one's that are not straight that are full of life and witty personality!
pve

What an inspiring post, Courtney. You very well may have just help create some budding artists!

Excellent suggestion. I bought Mrs.E. a travel easel like the one pictured. She had a ball with it and I am sitting in front of one of her efforts that is propped against the wall in back of my desk.

Go forth and Create.

This is my first year with a moleskine planner, and I am loving it! I also got it for 50% off, since I purchased early in January :)

I say...sketch everything you see...you start to see in a different way.