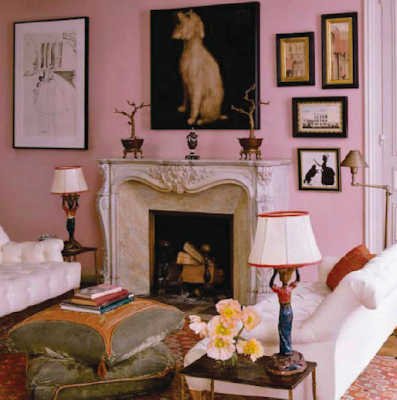 For some people hanging art always involves a leveling laser, a tape measure, and math; others dive in without measuring. Sister Parish was famous for not measuring. 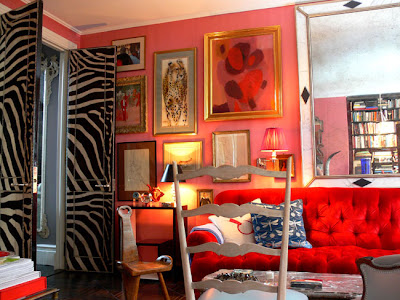 Whichever way you like to approach it, there are some helpful guidelines that editors, art collectors, and designers seem to agree on. Domino: The Book of Decorating recommends starting with one large piece, then adding smaller works to the arrangement. The secondary pieces you add might be hung with perfect symmetry or could be quite random. 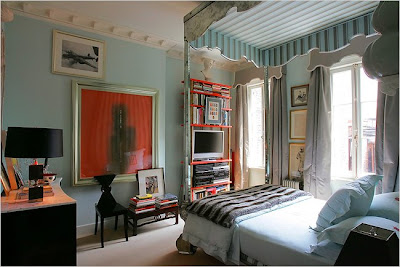 I was asked to share asymmetric examples, so here is a look at some old favorites including multiple views of Miles Redd's house, courtesy NY Social Diary. (To many of us, Redd is a genius at displaying pictures!) If you are interested in formal principles, this Southern Accents story is helpful. 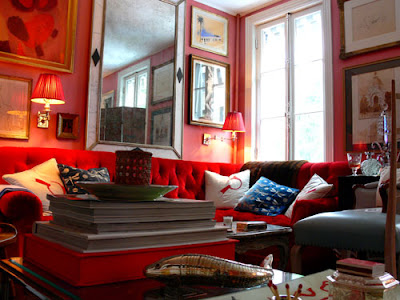 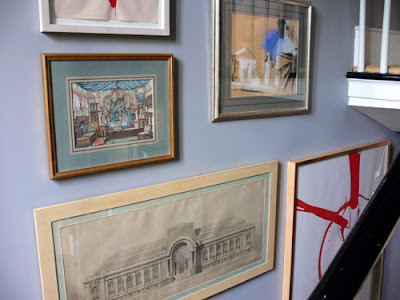 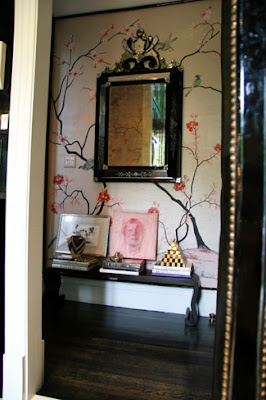 Definitely in the loose, informal camp is Kathryn Ireland. She prefers an unstudied look. But as you can see below, she did stick with the classic formula: very large centered mirror flanked by smaller (and not-so-small) paintings. 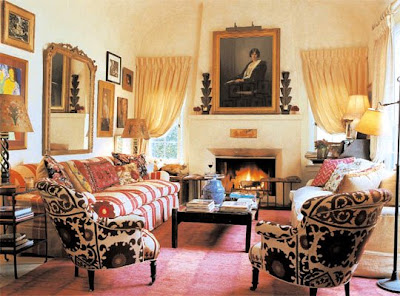 Rayman Boozer seems to go by instinct, his apartment is shown below. 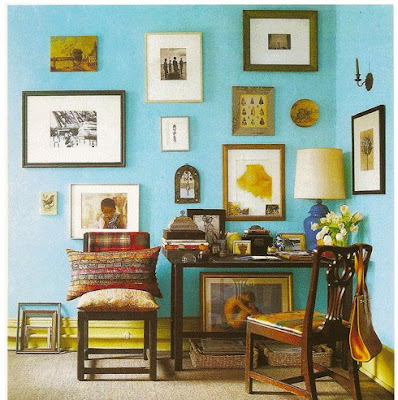 Caroline Clifton-Mogg says, "The role of both frame and mat is not to subdue or conflict but to flatter and complement the image they surround." 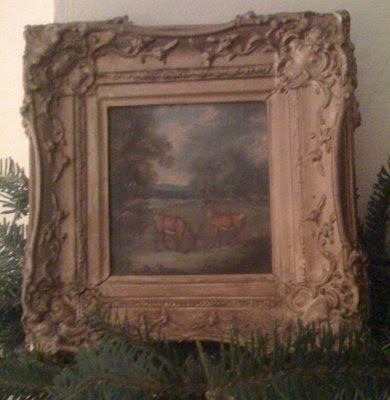 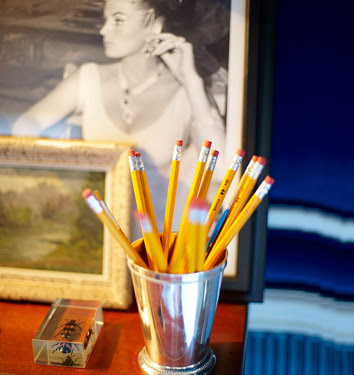 She adds that small oils can sometimes lose impact when framed according to conventional proportions, so it may be acceptable to use a wider, bolder frame. In general though, "The frame should be almost respectfully reticent in the presence of artistic merit." 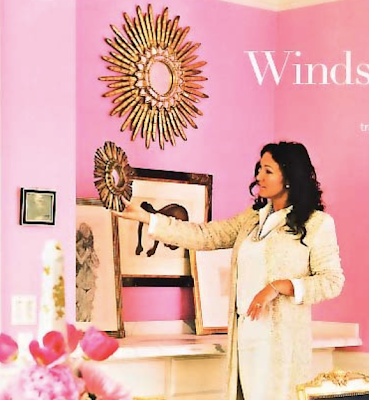 Credits:
Image one is Lisa Fine's apartment as seen in the November 2008 Elle Decor. Fine owns a Kara Walker, an ink drawing placed to the left of the portrait of Malula, Fine's late dog.

Rayman Boozer's apartment is from the May 2006 Elle Decor.

Image ten is from domino, February 2009.

Clifton-Mogg quotes are from Displaying Pictures.
Posted by Style Court at 1:38 PM

I don't like to measure either, I just eyeball it -yet I always start with the bigger pieces. I didn't know I had a 'formular' LOL. Glad to know these other gread designers feel the same way!

AD -- your natural instincts seem to be spot on!

Those lamps in the top photo are TDF! Those jumped out of the Elle Decor for me!

Courtney, I have started a Clawfoot Tubs Group on flickr, inspired by an image you showed awhile back, which I have swiped from you to add to the pool. Please join in! (http://flickr.com/groups/987546@N21/). So far I'm the only member!

OK thanks Becky, I'll check it out!!

Big congrats to being on the top ten design blogs list at the Washington Post! You deserve it, your blog is quite an authority on all things design.

Thanks so much Seleta!

Measuring is far too complicated. I prefer to take a haphazard approach as well. Additionally, I LOVE the way Miles Redd hangs his paintings/drawings. Absolute perfection....now imagine if we only all had as many things to hang as he did:)

Emily -- I can never decide who has the more staggering collection, Redd or his clients!

For my taste, I think the pictures are too far apart in Rayman Boozer's apartment. The visual tension that you want to create among the works disappears with all the space between them. The patches of blue wall (the negative space) begins to function like more art, moving into the foreground and ruining the effect.

Ms. Wis -- interesting point. I'll have to mull over the negative space issue :)

Style Court,
You are top ten in my book and these past posts will be in my "wall of fame!"
The symmetry vs. asymmetrical is excellent, you are a wealth of information.
Patricia

Patricia VE -- as always you are so kind and generous. I'm thrilled with your reaction to these art related posts!

Hope the asymmetrical pics prove to be helpful.

what a treat it has been to be a stylecourt groupie the last couple of weeks. Hanging has always been daunting for me but I am most inspired. Thanks as always!!

Oh good Stacy! I hope there will be hammering going on this weekend.

Thank you so much for the inspiration! I adore your blog and the last few posts on hanging art have been so helpful!

I never measure... it drives my family crazy.... but it works

kathyrn never really measures - all those prints in her living room - she just eyeballed it. i don't measure either, but i leave multitudes of holes behind each picture - not good!

Sqirrel Girl -- thanks so very much!

I collect those antique frames and I have a range of many sizes and styles!! thanks for sharing!!

Thanks for stopping by! Glad to hear you collect the old frames. They are wonderful.

Love those zebra doors...great post. I've loved suzanis before they were cool. I wish they weren't so ubiquitous (I'm sure I mangled the spelling...too lazy to look it up). Congrats on the honor!

Hi Jill -- thanks! Recently Margaret Russell was quoted in a Chicago paper saying, if memory serves, that there's no reason to think Suzanis are "out." They've been around so long, as you say. I find them in old books all the time.