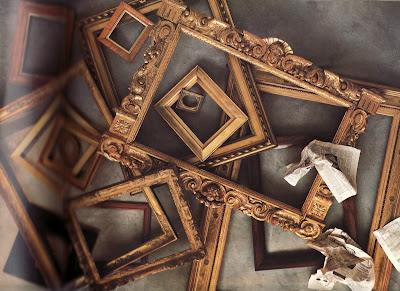 I think I was about seven the first time I selected a frame for a work of my own. (One of my uncles owned an art gallery and framing studio.) Looking up at what seemed like an endless array of picture moldings -- and being allowed to have input -- was a real thrill. Since then I've observed that framing and hanging art is a very subjective thing. And it's been that way for centuries. Frames reflect fashion, offering "a good visual guide, in miniature, to the stylistic developments of the time," writes Caroline Clifton-Mogg, author of the helpful resource, Displaying Pictures.

This week I plan to share a bit of what I've learned from her book, but quickly now I want to mention the second image above. Note the thick chain connecting the small painting to the larger one? It makes me think of Mrs. Blandings, her interest in gallery walls, and her hero Mr. Gambrel. 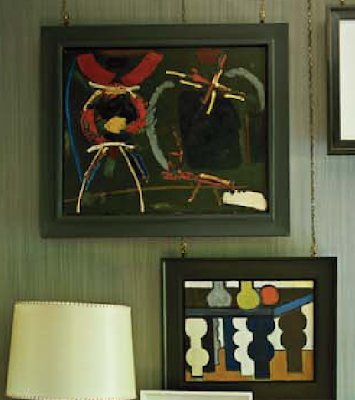 Clifton-Mogg says that the tradition of hanging one painting on chains from a larger picture used to be quite common in grand houses. Placing works so close to a mantel was decidedly in vogue during the 18th and 19th centuries. Gambrel's 21st century arrangement includes frames that aren't literally chained together in the same way, but the effect is similar.

Images one and two are from Displaying Pictures, Mitchell Beazley Publishers, 1988. The last image is cropped from a William Waldron photograph, Elle Decor, January 2009.
Posted by Style Court at 9:37 PM

So true regarding framing being subjective. I like so many looks though depending on the work of art. Even a gilded traditional frame design on a very abstract or contemporary piece. I can't wait to read Carolyn's book.

Do you think he's issued the restraining order yet? I do love this treatment - and no hole commitment!

Courtney, If I might direct people to this entry, you can see that the house on the Shore has all of its paintings hanging from brass rails and chains. The rails run around the tops of the walls in all of the rooms. It takes some doing not to have it look jumbled.