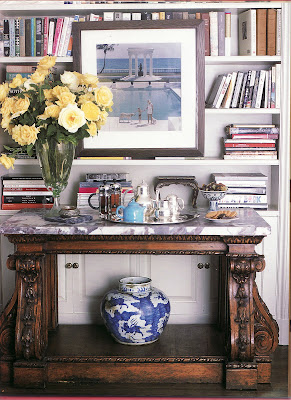 Here's another arrangement to consider if you plan to move things around this weekend. Truth be told, it wouldn't work for me -- I need easier access to my books and storage areas. But the juxtaposition of the modern Slim Aarons photograph with the stately, marble-topped Kentian table is really interesting. The whole vignette evokes cozy glamour, and how can you not fall for the loosely arranged yellow roses? The Chinese pot under the table is apparently a reproduction. 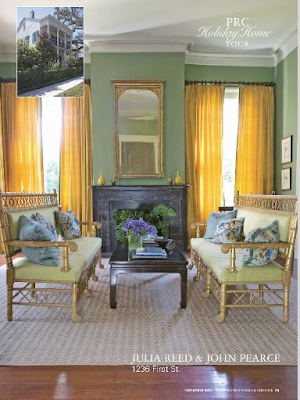 Some of you say you want to see more yellow, while others have tired of it. For those in favor, I think these golden-yellow curtains look stunning against green walls in Julia Reed's New Orleans house. Last holiday season she generously participated in a tour of homes that benefited Preservation Resource Center of New Orleans. (Image courtesy New Orleans Homes & Lifestyles .) 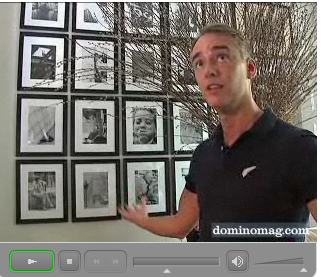 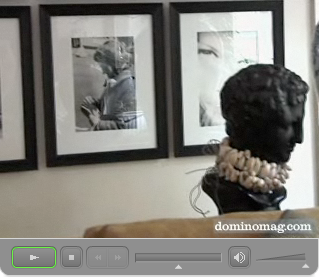 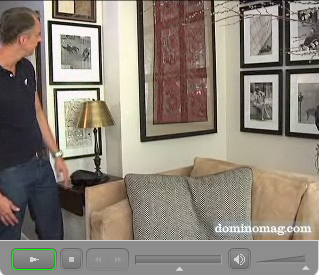 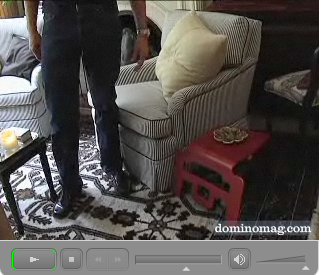 No yellow, but this domino video of Michael Bastian's digs is a must see. I think most of the free world has already watched it, however it's filled with inspiration for arranging and collecting art, and I should have linked to it in an earlier post. 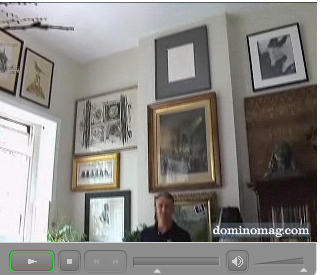 What did you say? There are people who are tired of YELLOW? There must be some mistake. That simply can't be. Maybe they said "jell-o" and you misunderstood.

where can I find a (reasonably priced) English console like the one pictured from Michael Smith's book. Anything on 1st Dibbs starts at $20K and just goes up and up. I'm obsessed with that console!!

Oh Anon, that's a good question. Let me check around and hopefully other readers will have suggestions.

dolcechic -- thanks for the input :)

i think you and mrs. b have got it right...we saw a quite a bit of wonderful yellow-tinged loveliness all through election day, didn't we? all those yummy yellowy shades...bring it on!

I do think of Nancy Lancaster when I see yellow :) It's not everyone's cup of tea, I understand, but I'm drawn to it.

Yellow is a perennial favorite. It just brightnes one's day in so many different shades.

hand up, slowly...back here in the back....ummm, I don't like yellow in my home. I admire it in other's, but I can't live with it.

I know, pelt me with lemons if you must.

A friend gifted us that very Slim Aarons photograph last month which I promptly had framed and then hid behind a chair. I love it! But it just doesn't go in our space. I even considered redoing the sitting area off our bedroom around it. The image you posted has made me rethink all of this. Maybe I'll pull it out from behind the chair tonight and give it another chance. If it works I'll post next week,

Have a lovely weekend..

Annie, I'm intrigued. Can't wait to hear what you decide.

I love yellow. This is my color combination in my living room-green walls and yellow silk curtains. The wonderful thing about yellow curtains is that it always seems sunny.

I am loving the citrus yellows and greens. It has such an uplifting quality-let the sun shine in! Julia Reed's seating area is luscious.

I love those type of counsoles , but painted in a more modern color to give it some vibe

My favorite item in my offic is my desk lamp..the base is yellow and blue! I love yellow!! Those drapes against the green wall remind me of the yellow roses in the first picture. With all the snow and cold we are experiencing here in Cleveland...a little yellow sure goes a long way!

The videos are perfect! I am still trying to figure out where and how to hang some of my treasured art I have been collecting in my travels!

Have a Great Weekend!