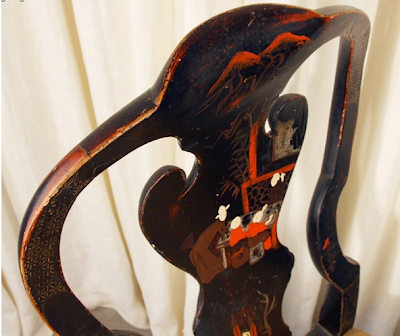 Oh, if not for the recession. This beautiful chinoiserie chair kills me. It's an antique, from the 19th century, but everything about its style is inspired by the 18th century. Confused? 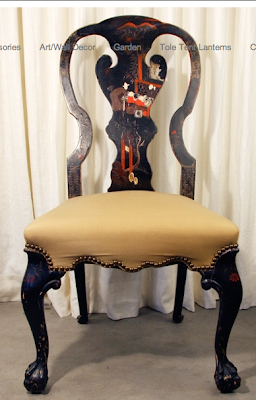 Much like the way clothing today can be heavily inspired by decades past, Victorian (19th century) furniture was all about revivals -- Gothic Revival, Egyptian Revival, baroque-inspired and so on. This chair is clearly influenced by 18th-century English furniture, with its high back and open splats, and the cabriole legs with ball-and-claw feet.

As the V & A explains, British chairs with curving back splats and cabriole legs are frequently dubbed 'Queen Anne.'  Interestingly though, these chairs first came into fashion not during the reign of Queen Anne (1702-1714), but in the reign of George I (1714-1727). 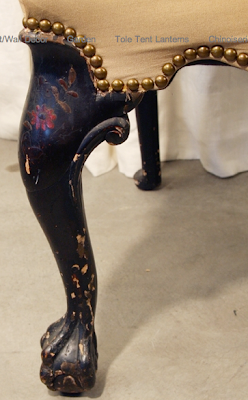 The truly sumptuous part is the painted finish inspired by Asian lacquer. Typically when done in the West this was called "japanning." Black backgrounds with red and/or gold detailing are classic. So basically the chair is a bona fide antique based upon furniture from an even earlier era. Moreover, it's super-chic.

Available at Coleen & Co.
Posted by Style Court at 4:06 PM

Email ThisBlogThis!Share to TwitterShare to FacebookShare to Pinterest
Labels: chinoiserie

Absolutely beautiful. Why not help the economy and make it your own? It's stunning.

Hi GSG -- I'd love to contribute but I think it's out of the question right now :)

Style Court said...
This comment has been removed by the author.
5:22 PM