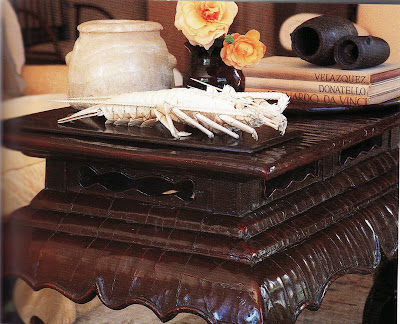 I once found myself squished into the back of an overflowing seminar room while Rose Tarlow spoke about design. Due to the crowd, I couldn't see her face but I heard a man rise and ask Ms. Tarlow about the most important element in a room. Without missing a beat, she said, "The people." 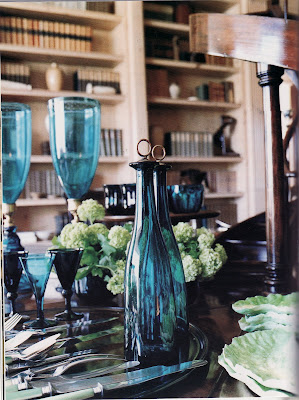 Tarlow is known for being sort of an anti-decorator. She considers herself first and foremost a collector and antiquarian, and she likes to craft subtle rooms around exquisite objects. I think of her as the high priestess of understatement. But that doesn't mean she is a minimalist. 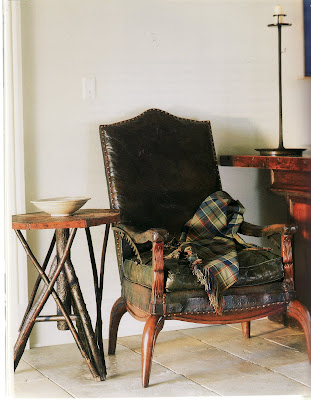 She does though often use a neutral backdrop, something that she feels won't compete visually with her cherished collections, and she uses colorful objects -- the brilliant blue glass and the green ceramics in image two, above -- like jewelry. A very flexible approach to decorating. 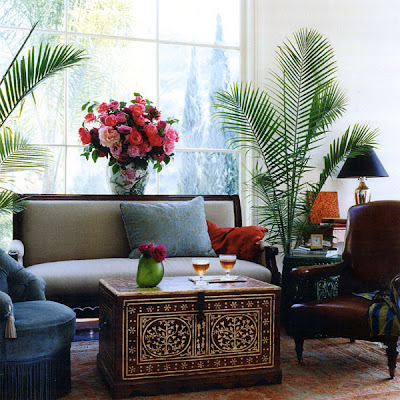 Neutrals certainly aren't a requirement for understated interiors. According to Vogue's Book of Etiquette, 1969, "A little understatement merely recognizes the obvious but frequently forgotten fact that a house should not overwhelm the people in it. A domineering quality is as disturbing in a room as it is in a person."

I think the room directly above, designed by Schuyler Samperton, shows a nice use of restraint. There are not too many pillows on the sofa. Yet, there is no lack of interesting pattern and texture. It's not that grand gestures or abundant pattern are even a problem. The key, according to Vogue is avoiding the absurd. And of course that can become subjective. 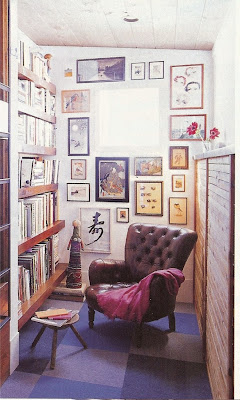 "A ruffled skirt around a bed can be charming, but if the canopy, chair skirts, and curtains are ruffled too, the charm vanishes."

"Ornaments that delight the eye can make a room more interesting, but when they occupy every available surface, one feels like the proverbial bull in a china shop."

"Just as people can be too loud, too talkative, and too exuberant -- so a room can be too dramatic, too colorful, too crowded, too ornate...exaggeration tends to create an impression of insecurity, braggadocio, or vulgarity."

The last image was sent to me by reader Elizabeth. It's a Paul Ludick alcove from Elle Decor, December 2006. The mix of the George Smith leather chair and gallery wall grabbed my attention.

Images one through three are from The Private House. 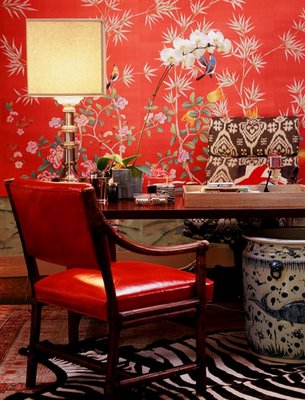 And one more thought: this oft-posted vignette from designer Betsy Burnham is a favorite of mine. She seems to be channeling the famous Vogue editor Diana Vreeland. It's not too domineering for me, so I think it raises an interesting point about the whole concept of understatement -- as defined in the Vogue book -- being, again, very subjective.
Posted by Style Court at 8:42 AM

I just love all of these posts about what makes a home. I have always loved the teal glass that Rose Tarlow uses on that table. Schuyler Samperton is so wonderful and helped me to do a room in my home that I love. She's a genius with textiles. On another note, I just called the store Elizabeth Stuart Designs after reading about it on your site and before I could even finish a sentence the girl said, "I'm too busy right now, you'll have to call back." I don't think I will! Too bad as I just love love what I've seen. Thank you so much for keeping me entertained and in piles and piles of lovely print-outs.

First, I am so sorry about your experience calling Charleston. Not what we want to hear!

How wonderful that you worked with Schuyler on a room in your home -- she is one of my heroes.

I love the green chair too. Now I must go make sure I've not translated the sentence incorrectly :)

Courtney - doubly impressed by the last comment. I've adored this series and can't wait for tomorrow. While these posts make we want the book, I don't think I'll enjoy it nearly as much without your interpretation. Merci!

well, that means a lot Patricia. Thanks. I will try to finish with a flourish.

Rose Tarlow? Is there any greater decorator? Even if she's working in a style more modern than I could live with, there's something incredibly soulful and honest about her work. She truly is America's greatest decorator, bar none, don't you think? Tucked into my mind, permanently, I think, is an image of her sitting room in Los Angeles, with the vines creeping in and up one wall.

AL -- yes! Soulful and honest. The vines and also, for me, the sofa in front of lacquered screen (her London home?). Utterly timeless but not stiff.

the B.Burnham room is divine. so much texture and pattern but it does not overwhelm--at least not my eye. such eye candy.

Kelly, thanks for sharing your too cents. That's how I feel.

I agree that the most important element in a room, particularly a public room, is the people. But what Vogue's admirable guidelines leave out is the sense of adventure or theatre that some rooms provide (even if they are hard to live with forever). I love walking into or being a guest in a room like that.

I've really enjoyed this series . . . having just watched the latest debate, I do wish the four candidates would take the lessons to heart. Oh, for some understatement and some sincerity in our politicians. Perhaps then they would wear as well as the great rooms you've shown.

This week I've been thinking about Millicent Fenwick, the representative from NJ (I think) who was a Vogue editor and wrote the 40s edition of the etiquette book. Although I'm not old enough to have heard her debate, but I've read she was special.

Rose Tarlow has always been one of my favorites. I love her approach to design and her style.

Courtney, the little library with the wall of art and cozy chair to read....love it. There is a space on that wall that could use a work of my art!

Lana -- she is so respected. Thanks for stopping by.

Meant that last reply to be warmer -- Karena it is such an inviting alcove :)

I love plants and flowers in a room, they really brighten things up.

I do however, have a habit of forgetting about them and practically killing them off... must try harder!

Linked your blog on mine by the way :)

Rose Tarlow - I am more acquainted with her furniture than her actual work, but if her furniture is exceptional! Now, I need to go get more information on her work.

Sara -- you would really like her book Private House. Lisa Newsom says it should be required reading for designers!