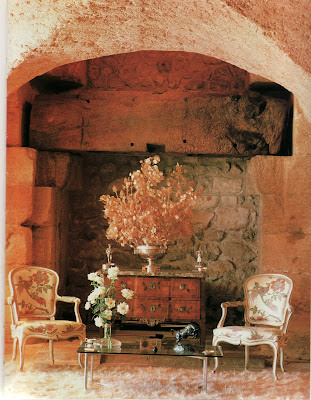 I was all set to do a post about industrial or "working" buildings -- barns, cotton mills, carriage houses -- used as homes. For some reason I thought the phenomenon really took off in the late 1960s, becoming more widespread in the 70s. (There's a chapter about it in one of my grandfather's old restoration books.) And maybe for the most part that's when recycled structures became mainstream. 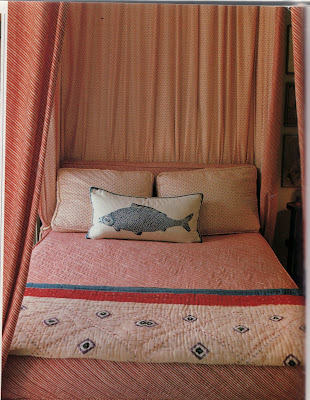 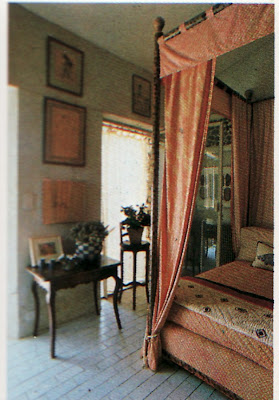 But then I remembered that the concept has been around in France for centuries. The image above, at the top, shows a 14th-century olive-oil mill that was converted into a 16th-century weekend retreat for the wife of Les Baux-de-Provence's governor.

When the living room was published in 1984, French furniture from varied periods was mixed and meant to contrast with the rough stone walls and vaulted ceiling. The Louis XV armchairs (a style described by Herbert Ypma in The Paris Interior

as "possibly the most successful pieces in the entire history of furniture design...") are covered in a glazed cotton chinoiserie print, and juxtaposed with a contemporary smoked glass and steel cocktail table as well as a fluffy rug.

The bedroom shown here is part of a 14th-century monastery barn that was converted after the French Revolution. American designer Dick Dumas restored it in the 20th century. The four-poster bed was made from plumbing pipes painted in panther spots, and the red-and-white fabric is from Manuel Canovas. A hand-blocked Indian quilt is folded at the foot. 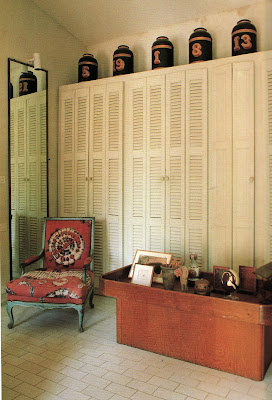 In the dressing area, Dumas covered a Louis XV-style chair with an Ivory Coast batik.

All images are from Pierre Deux's French Country, 1984.
Posted by Style Court at 1:55 PM

I LOVE THAT CHAIR!

I think that I tend to think on a small scale when it comes to recycling. I adore recycled decor. It was really nice to be reminded of just how grand the act of reusing can be:)

That's a nice way of thinking about it -- recycling on a grand scale :)

This reminds me of a converted mill in HG Complete Guide 1960 - stone floor, rough beams, rock crystal chandelier and French chair scattered throughout. One of my favorite looks. Charmed that the throw on the bed looks a bit like fish eyes.

Patricia -- I loved that mill house when you posted it. Also good reminder that people were doing this in the US in 1960.

Wonderful observation about the "fish eyes!"

It was popular in the early 40s to convert old barns into homes as well - I did a short post on that a month ago or so. Think about the movies ' holiday inn' or 'white christmas' - converted barns!

Change -- great examples. Thanks so much for the reminder!

Beautiful. It is amazing how resilient the Louis XV has been through centuries of changing styles.

very interesting - especially the progression of the thought process behind the blog. People have no idea!!! you know?

love the guest room blog too - especiallyl that sofa in the first picture - to die for! you know? haha

Yes, I want the sofa in the guest room post too!

I love this Ivory Coast batik on this regence armchair ! It looks terrific