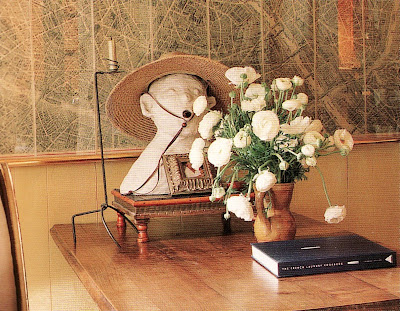 I don't know who was the first to experiment with it -- perhaps an antique shop owner tried it in the beginning -- but over the years quite a few designers and tastemakers have added a whimsical touch to statuary by tossing on a hat. The interesting part is looking at the various styles chosen. 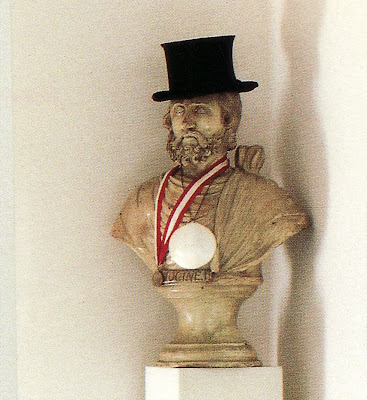 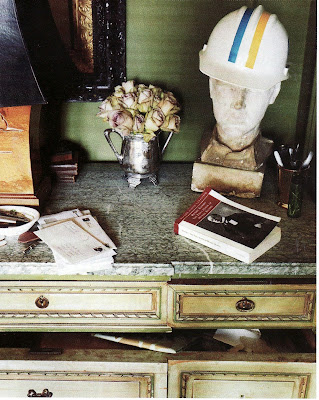 Chicago-based historian Bart Swindall did something personal by opting for a utilitarian hard hat that speaks to a former job. (O at Home, Fall 2008). Be sure to pick up the magazine and see his chic apartment inspired by vintage House & Garden's and iconic rooms of the past. Photography by Roland Bello. 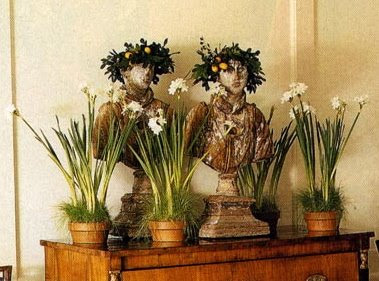 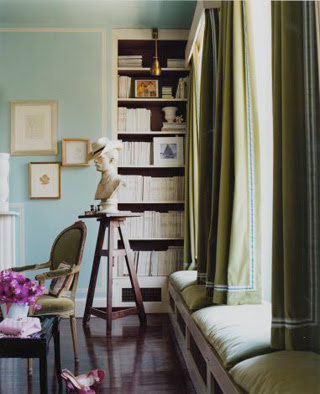 And Sara Ruffin Costello's laid-back elegance -- a dapper addition to this bust. Photo by Paul Costello, as seen in Domino. 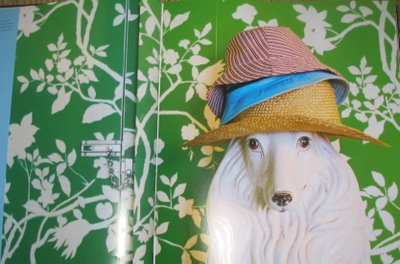 Pure Jonathan Adler as seen in My Prescription for Anti-Depressive Living. 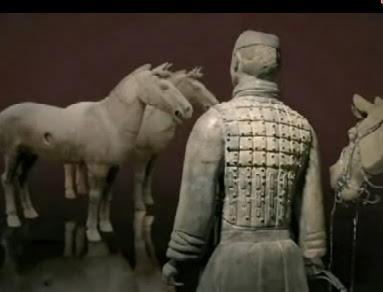 Figures to be treated with more reverence, the First Emperor's terracotta army, are headed to Atlanta. Over 100 works from the ongoing archaeological excavation in China will be on view at the High, November 16 through April 19, 2009. The exhibition is a landmark event for the museum since such a complete group of warrior figures has never before been loaned to the U.S. My tickets are already safely tucked away. 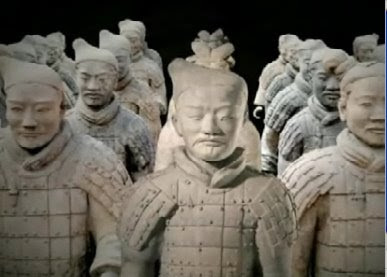 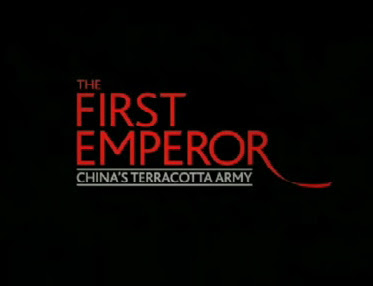 Courtney, it's a little very odd--although it's also very cool--to see my place popping up on my favorite blogs. Of course, Roland Bello's beautiful photography might have something to do with it.
As far as the hat goes, a beaver-fur hat or a straw boater would have been more in keeping with the faded look of my place, but the hardhat is a souvenir of my 13-year career at Illinois Bell. What can I say? We all make mistakes. At least I got a hat out of the deal.

Magnaverde -- so wonderful to hear from you! I meant unexpected in a cool way. Your place is just great. I'm going to revise this to be clear I mean original and creative :)

Congrats on your feature in O. You are inspiring and talented.

I stumbled upon your blog quite accidentally a few months ago and haven't missed a day since. I too have a very similar catalogue of tear sheets, but they lack your engaging commentary.

The Terracotta Army is departing our fair city in its march to yours, and having caught the show two weeks ago I can assure you that you will leave feeling entertained and well informed. It was very well done, and I wish you a wonderful day of exploration when it arrives in Atlanta. I also look forward to reading your delightful and insightful impressions in this lovely blog!

Warmest regards,
Mike (in the O.C.--did I just say that?)

You made my evening with these kind comments. Thank you! I'm thrilled to hear your impression of the show was positive. Sounds like you have a great eye, so that bodes well.

Thanks for stopping by.
Courtney

The Terracotta Army is a show not to be missed. I saw it a few years ago when it came to the Walters Art Museum in Baltimore. It was stunning.

I love the idea of hats on top of things. I hang my pink straw hat on a huge old finial.

I love to humanize statues and antiques , I always do that .

I wonder if writer Tom Wolf has a statue with a hat.
I always think of he and his hats. I now need a statue as a hat rack.

The Hoefer image is divine. The candlestick, the flowers (I had to edit because of my spelling deficiency) and is that small stool and alter stool? Is that right? And the Hadley is reminding me of Louis in Trumpet of the Swan - read it to your nephew in one more year.

This is too funny...my husband has a hat problem...on the order of a book problem. So I got a rather cheap reproduction of David's head...yes Michaelangelo's...and piled high on it are many hats...it's in the bottom circle of the spiral stairway in ou foyer. I have to say I stole the idea from a book on Englich country houses where this exact thing was done in niches on either side of a very grand entry.

WHAT a fun blog entry, Courtney!
And a mahvelous idea!
I just love your blog!
P.s. I have a beautiful statue on my breakfast room table of a lovely maiden and I have her head adorned with a wreath of olive leaves. I love it!

It sounds like everyone has such creative ideas. Very personal interiors.

This is a great collection of ideas. It makes a plaster bust not tacky but fun and allows one to use a hat in a good way. I have the hat, now I'll look for a head to hang it on.

What a fun and whimsical way to add some character to a room- who would have thought to "dress" a sculpture- what a concept!

Love the hats, Courtney, and as an employee of AT&T, love the old Bell System hardhat.

The First Emperor Show came through Dallas years back, though I hear it has been greatly expanded. It is indeed, not to be missed. When we saw it, there was an exhibit of the beautiful double sided silk embroider in it where each side of the transparent silk was embroidered with a different scene, with a stitch called the "forbidden stitch" because the stitcher eventually went blind. I later found out this was myth. I still have my little pottery warriors they sold at the exhibit.

Halcyon -- you are full of interesting info! Appreciate it!

`allo, `allo!
Dropped in for a peek, was looking for info on the Terra Cotta Army rock-n-roll band, but this is nifty stuff Court!
My mum has a bust of a bloke at home and I may put a hat on him next time I visit to see her reaction.