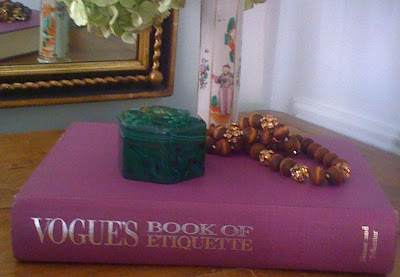 It will probably be a week or so before my Cecil Beaton book arrives. In the meantime, I thought I'd share some more enduring advice from Vogue's Book of Etiquette, 1969. The tips are universal and relate mainly to the concept of home, rather than to decorating. And they apply whether you have endless resources or a tiny budget, so I think the guidance is timely. 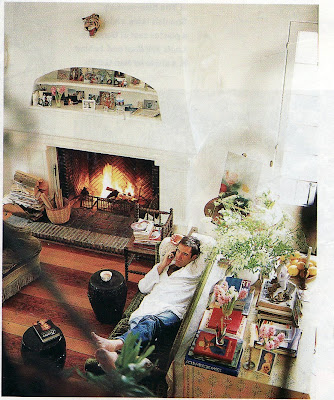 Vogue says houses that are well-mannered and harmonious tend to put people at ease and evoke attractive behavior. Four essential ingredients contribute to this type of home: personal warmth, sincerity, understatement, and consideration. "None of these has to do with formality or lack of it. And none is a matter or money." 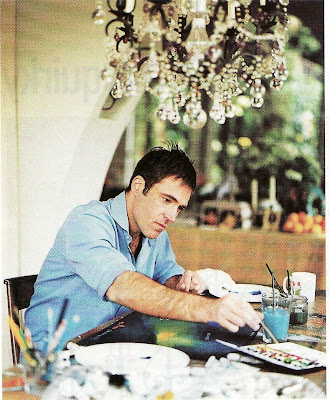 According to the book, "Personal warmth is the most appealing element in any room and nothing -- elegance, drama, enormous expenditure -- can take its place...it is the sum total of many things, all of which indicate that people really live in a room, and do not merely pass through it." 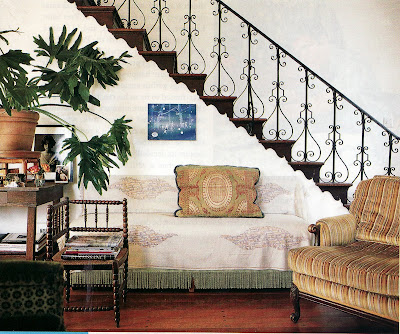 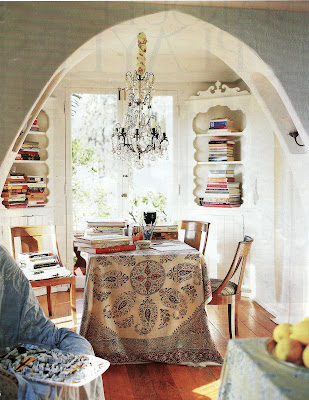 Vogue stresses the presence of truly meaningful objects over a contrived arrangement. The wildly different homes of Aerin Lauder and artist Konstantin Kakanias contain layers of meaning, and both exude warmth. Kakanias' bohemian digs are in the hills of Hollywood, carved out of part of actress Barbara Stanwyck's former playground. Lauder's inherited weekend home, in contrast, is stately. But each house is filled with mementos, not trendy accessories. 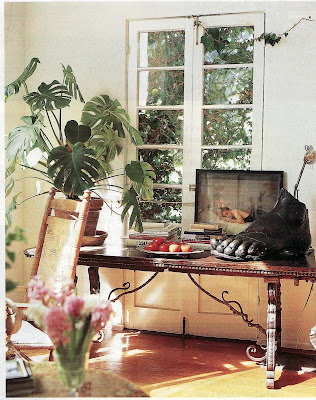 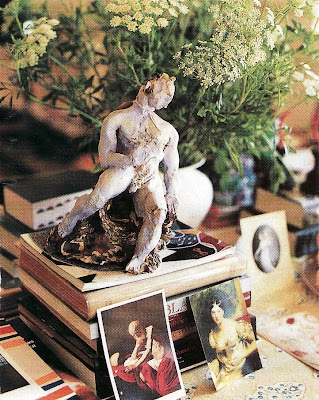 Signs of the artist's fascinating globe-trotting life are clear throughout his home, and Lauder keeps her grandmother's spirit completely alive rather than worry about being hip. 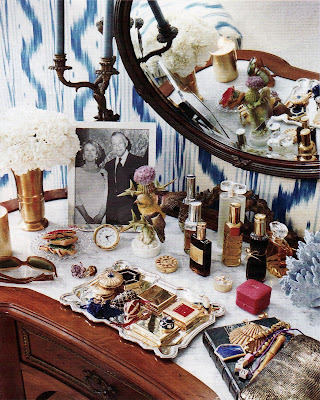 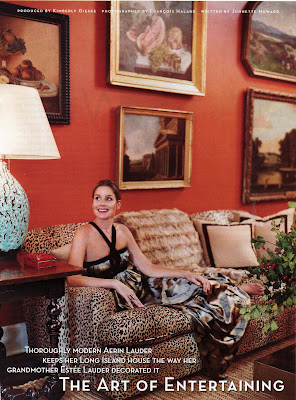 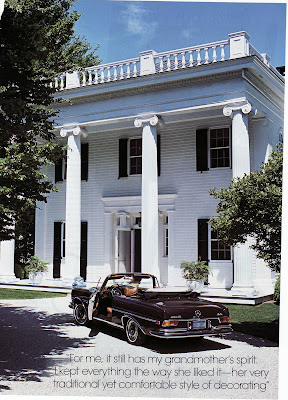 "Warmth is an inviting, disarming quality that must originate in a person's or family's sentiments and way of life." Examples include:

A collection of mediocre drawings by a long-dead relative grouped without apology over a pedigreed antique.

Paperbacks on the shelves alongside the better-bound books.

Lamps in the best spot for reading as well as for decoration.

A pile-up of magazines rather than a careful arrangement of this month's issues.

"Warmth can begin with sunny colors or big hospitable sofas and chairs, but in themselves these are not enough. A warm room suggests in all its parts that comfort, affection -- even personal whim -- are more important than effect." It makes people feel contented, "just as they do in the presence of a warm individual, and they tend to be their best selves because of it. "

Images two through seven show Kakanias' home, as seen in House & Garden
Images eight and nine show the Lauder residence, also House & Garden
The exterior of the Lauder home is from Vogue Living
Posted by Style Court at 7:14 PM

Amen! This "rule" (ingredient) is one that so many break! Brilliant... I need to get my hands on this book of yours... I'm smitten! Beautiful images, great post! (as usual!)

Thanks Erika! When I found the book in an antique shop, I was so excited but maybe it's not that rare. I should Google it :)

Also, 1969 is a great year. The book is still quite traditional but deals with progressive issues -- at least topics earlier editions might not have.

what a fantastic post. my favorite rooms are always the one that are decorated from the heart - my daughter's bedroom - versus from a book or magazines - my darn living room, ugh. the mags always talk about "personal style"; perhaps they should focus on "personal warmth" instead.

carolyn -- so glad this resonated with you!

The 1948 edition written by Millicent Fenwick would be great to own as well.

I agree... personal warmth over personal style. It is just like anything in life, really. When you love something, it shows. No dressing up required :)
This is such a lovely post!

This is the missing ingredient from so many american homes today. I think mainly because people actually aren't home that much. I particularly like the detail about the worn rugs that no one can harm.

Such a lovely post, and it is all so true. When I go to visit my parent's home, I don't know what I would do if they didn't have their stacks of reading materials, Mom's needlework, and Dad's reading glasses next to his recliner. A home exuding love and warmth

This makes me feel so much better about the slightly shabby hand-me-downs. I love the comparisons of these two seemingly disparate homes. Your careful consideration always shows me something new.

balsamfir -- so true about people spending less time at home.

patricia--glad the comparison worked. There is a section in the book, well a paragraph, about shabbiness vs. dirtiness :)

Love this post. Warmth and hospitality--it's what I think good design really is!

Off topic, but, I was reminded by the photos of Aerin Lauder's home how much I miss House & Garden. Any ideas as to what Dominique Browning is up to these days?

great post... such a pleasure to read. i love your posts about this book so much I just ordered my own, you can find used copies on amazon. your entires are so soothing and gentile, they make me want to strive to be a better person, not just have a more beautiful home.

MacKenna -- not sure. Miss the magazine!

olives -- what a kind thing to say. i'm so flattered.

i hope you enjoy the book! thanks as always for visiting.

I think I already mentioned this, but I saw it at Book Thing and didn't grab it and when I realized what it was, I went back, and it was gone. Couldn't have been more than 5 minutes between!

Meg, the Fenwick version or the swinging 60s?

I love this post...and your new book looks beautiful...and loved!

Linda -- I do love this book! Thanks for your comment!

Great post Courtney! Warmth is what is missing from so many homes, and I think it might have to do with the fact that many homeowners are decorating according to trends or peer pressure- and it's therefore not a reflection of that person. You know that saying "Do what you love and the money will follow"? Well, I think "Decorate your home with things you love and the warmth will follow". :)

Konstantin Kakanias´ home reminds me in some details the appartment of Carolina Herrera Jr. in Madrid (when she was single), well her apartment was a little bit "girly" than KK´s. And when I´ve clicked the pics to see them in detail, I´ve sawn a framed photo of CHJr. on the table in third pic or your post, then I´ve remember CHJr. has some of his draws in her home in Extremadura. Probably they inspire by the other.

Sorry for my poor English
Elena.

Here Here! A salute to rooms that look lived in, but are still artful, pretty, playful, and comfortable! That's my story, and I'm sticking to it!

"Decorate your home with things you love and the warmth will follow" should be the new thing for needlepoint pillows.

elena -- your English is fine!

Great eye! I think CH and KK are good friends. His art was seen all over in her Spanish home (Vogue Living) and Peter Dunham has his art too.

oh... this post speaks to my very heart of design. no home should feel precious. A well lived in home with pieces that speak to the owner, make for a welcome, beautiful environment that immediately feels perfectly put together.

I love this post. I think before all else, a home should reflect the personalities of the people who reside there and reflect lives well lived. I adore photos of stark interiors or ordered rooms, but I don't really want to inhabit those rooms. CH and KK's homes are engaging, inspiring, and interesting. I can't think of anything more welcoming! Wonderful post, Courtney!

Thanks Susie! Love your perspective.

This is an inspiring post. I just emailed it to myself to read again later. Thank you.

I loved this post, and I do believe warmth is the element that makes me most love a room or home. When a home feels lived in and loved, I can't help but feel at home too.

I am also thrilled to discover I have unknowningly been following their advice... I especially have the paperback books alongside better-bound books and the pile-up of magazines down to a tea :)

Thanks for sharing this book with us; it is now on my wish-list.

So glad you liked this post. Maybe everyone will start adding the book to their wish list.

Sounds like you truly appreciate warmth in a home.

Found this post via Urban Grace. This is a great series to explore. Thanks for opening our eyes to the details behind decorating.

Please Sir -- so glad you found it! Thanks for stopping by.

style court & peak of chic:
two reason my amazon bill is so large!!
Great post and I want that CAR and house!

Thanks for stopping by Halcyon. I'd like the car too :)

'Durable Goods'* is an article/essay/memoir that has come to me to write while reaching the end of a tunnel and, mercifully, finding the light is NOT an on-coming train. Much older than you all, yet I find kinship here among the twins, their colleagues and friends. The beauty, sincerity, wisdom, flair...I had it in earlier times & the energy to see things through...then, well, not so much. Thank you for all these gifts made visible; the 'durable goods' that stay even when we look away. And a genuinely tenacious, wholly stubborn God. 'Bye, bye, bye' (a darling lady's beloved made these his last words to her, which I find the best of 'so longs'). Kathryn*

Perhaps reminding folks of what truly makes an appealing home might mean the end of stainless steel appliances and granite countertops! Now there's something to cheer about.